LONDON — Works by female artists of African origin created the highest-energy moments in Phillips’s summer sale in London Thursday. It was the last of the evening auctions that are the traditional finale of the contemporary art market’s hectic seasonal cycle.

The British-Ghanaian painter Lynette Yiadom-Boakye and the more established South African painter Marlene Dumas both had paintings sell to telephone bidders for about twice their estimates.

“There’s been a correction. Buyers are looking to discover something new,” Cheyenne Westphal, the chairwoman of Phillips, said, referring to how price growth for some established male artists, particularly abstract painters, has stalled. “There’s a return to figuration, and the artists are very diverse,” she added. “A global audience responds to that.”

Four bidders pushed Ms. Yiadom-Boakye’s “Leave A Brick Under The Maple” (2015), a life-size portrait of a standing man, to £795,000, or about $1 million, almost double its high estimate. Institutional validation always gives confidence to bidders, and Ms. Yiadom-Boakye, who will have a retrospective at Tate Britain next May, also features in the much-praised Ghana pavilion at the Venice Biennale. 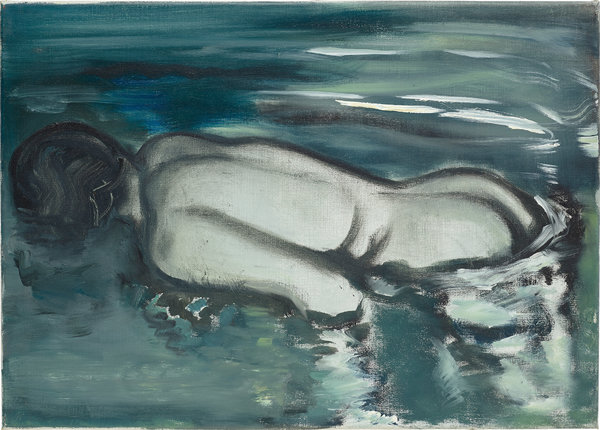 Ms. Dumas’s haunting 1988 canvas, “Losing (Her Meaning),” which depicts a nude woman floating face down in a pool, has been included in some 18 public exhibitions, but had never been offered at auction. One of the few true museum-quality works in the summer sales, this piece climbed to £1.2 million, or about $1.5 million, double its high estimate.

Tuesday at Christie’s, when “Out of Body,” a 2015 oil-and-fabric collage of stylized female figures by the young African-American artist Tschabalala Self, came up, Jussi Pylkkanen, the auctioneer and global president of the auction house, told those assembled, “There are 19 bidders on the telephone, so be brave with your bidding.”

And they were. Intense competition from telephone bidders led the buyer, the New York collector, dealer and market-influencer Jose Mugrabi to pay £371,250, or about $415,000, for the piece. It was a new auction high for the artist and more than six times the Christie’s estimate of £40,000 to £60,000.

Dealers have lengthy waiting lists of buyers seeking work by the hottest names, so when these works appear on the auction market, they can fetch far more than gallery price tags.

At Art Basel this year, for example, Pilar Corrias, Ms. Self’s London gallerist, said she sold a new work for less than $100,000. Such gulfs between “primary” and “secondary” market prices inevitably encourage speculation.

“I am trying to keep a level head in regard to the auction prices,” Ms. Self said in an email Thursday. “I do not personally base the value of my work on these results.” Ms. Self is currently an artist-in-residence at the Studio Museum in Harlem and recently designed a limited-edition handbag for Louis Vuitton.

London hosts three series of high-end contemporary auctions each year. But the continuing uncertainties surrounding Brexit have made collectors reluctant to consign trophy works here, particularly in the summer. Christie’s held no evening contemporary auctions in London for two years before returning this June.

Sourcing top-quality material remains a problem, dealers say. “It’s very mixed. Not a strong sale. You wouldn’t come back from holiday for this,” Ivor Braka, a private dealer and collector based in London, said of the 32 works up for auction at Christie’s Tuesday.

In the absence of a Gerhard Richter abstract painting, Christie’s offered one of his large-scale abstract tapestries from an edition of eight created in 2009. It sold in line with its estimate for £1 million, or $1.3 million.

Thanks to blue-chip 20th-century pieces like Jean Dubuffet’s vibrant 1961 painting “Cérémonie,” bought for £8.7 million (about $11 million) by Daniella Luxembourg, a London and New York art dealer, Christie’s raised a respectable total of £45.2 million, or $57 million. It was a far cry from the record £137.4 million ($174 million) the company achieved in March 2018.

The 42-lot sale at Sotheby’s on Wednesday evening raised £69.6 million (about $88 million), 37 percentage points less than the equivalent sale raised last year. Like Christie’s and Phillips, Sotheby’s lined its galleries with the sort of big-statement pictures that appeal to today’s wealthy art collectors, if not biennial curators.

Jenny Saville’s nine-foot-high canvas, “Shadow Head” (2013), sold to a bidder for £4.2 million ($5.3 million). A barely less-monumental “Self-Portrait With Empty Hands” (1998) by Albert Oehlen — a German painter who will be the subject of an exhibition at London’s Serpentine Gallery in October — took £6 million ($7.6 million) from Per Skarstedt, a New York and London dealer.

Sotheby’s said after the auction that it had achieved a price of “£92,500 per square inch” for a small Francis Bacon self-portrait from 1975, which sold for a single bid of £16.5 million. But otherwise, this auction settled into a metronomic session of middling-value works by “investment-grade” names valued between $300,000 and $3 million. Each attracted only one or two bidders.

“It was business as usual tonight,” said Alex Branczik, the European head of contemporary art at Sotheby’s. “It was a sale of established names that are the mainstays of the art market.”

But as demand shifts toward younger and more diverse artists, how long will established names like Mr. Richter, Christopher Wool and Rudolf Stingel be “mainstays,” particularly if they aren’t making collectors a profit?

The seller of the untitled 1992 word painting by Mr. Wool, “WANT TO BE YOUR DOG,” had paid $1.5 million for the work at auction in 2000, according to the Artnet database of salesroom prices. But no one was prepared to bid a low estimate of £3 million, or about $3.8 million, for it at Sotheby’s.

Fabrizio Moretti, a London dealer in old masters who collects contemporary art, said the estimates are too high for these established names. “And the market has got a lot more selective,” he added.

Mr. Stingel is the subject of a retrospective at the Fondation Beyeler in Basel, but the exhibition has not galvanized his auction prices. At Sotheby’s, a pale purple “Untitled,” inspired by an Oriental carpet, was bought by Gagosian, the artist’s dealer, with a low-estimate bid of £1.3 million. The seller had bought it at auction in 2017 for $2.9 million.