In another life, Randall Goosby would have been a pianist.

When offered the opportunity to learn an instrument as a child, he chose the violin but was told he was too small for it. So he started on piano instead. He struggled, and his mother, who had nudged him and his siblings toward lessons in the first place, could see that his self-esteem was beginning to wane.

Then they decided to give the violin another try, and something clicked.

“I would come home from school, and whereas my brother and sister wanted to play, I would throw open the violin case,” Goosby, now 24, recalled in a recent interview. “I was pretty much playing violin all the time.”

He breezed through the first several books of the Suzuki method at a pace that would make an average violin student feel inept. All signs pointed to something more promising than a simple love for a new instrument. 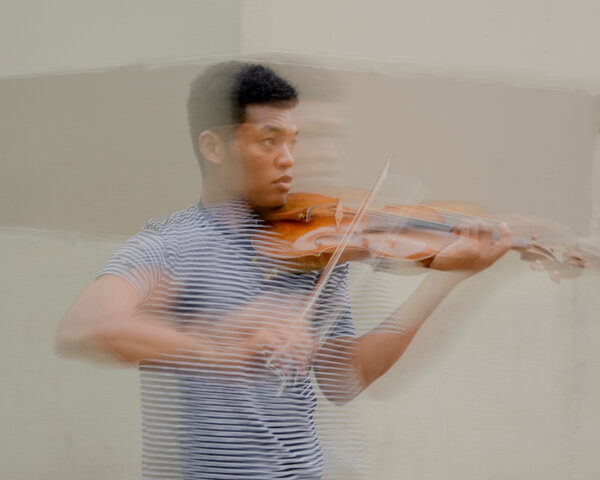 At 13, Goosby became the youngest winner of the Sphinx Competition’s junior division, then was invited to appear in a Young People’s Concert with the New York Philharmonic. It wouldn’t be long before he was a protégé of the legendary violinist Itzhak Perlman. And now, not even done with his education at the Juilliard School, Goosby is making his major label debut with the album “Roots,” out Friday on Decca.

The album, Perlman said in an interview, demonstrates that Goosby “knows who he is, and he wants to make sure everybody does as well.”

It’s not the usual debut. Where many young musicians might make their mark with a war horse concerto by Mendelssohn, Bruch or Beethoven, Goosby instead assembled a sweeping recital program of works by Black composers — including a premiere written by the bassist Xavier Dubois Foley and first recordings of Florence Price discoveries — as well as by Dvorak and Gershwin, two white composers whose music on the album reveals an indebtedness to their Black peers.

GOOSBY’S MOTHER, Jiji Goosby, a Korean woman who grew up in Japan passionately loving music and dance, was the linchpin of Randall’s early violin education. When he outgrew his first teacher, she bribed him to take a lesson with Routa Kroumovitch-Gomez, promising that if he gave it a try, she would take him out for sushi afterward.

He took his mother up on the offer and stayed with Kroumovitch-Gomez as a student for three years. From here he had his first taste, he said, of serious violin instruction. More teachers would follow, including Philippe Quint, whom Goosby and his mother would fly to New York to see once a month for six hours of intensive study.

Not merely a chaperone, Jiji sat in the lessons as well, taking notes. She also took a waitressing job at a Japanese restaurant to help cover the costs of their trips to New York; Goosby’s father, Ralph, was often traveling for his job in marketing. There were nights when the children were at home with no parents, eating a microwave dinner or pizza.

“I really understood even then how much of a sacrifice it was for my whole family,” Goosby said. “My family is my core, and it was a time when we could have seen a little more of each other.”

A turning point came when Goosby, following his Sphinx triumph, joined the Perlman Music Program and met his mentor.

“I had idolized Mr. Perlman, and of course I had my preconceived notion of what he’d be like,” Goosby said. “But he was one of the most down to earth, relatable, comforting presences for me.”

In an interview, Perlman recalled being struck by Goosby’s sound. “The important thing for me, in any musician, is sound,” he said. “And his is beautiful. It immediately hits the listener.”

Perlman shares teaching duties with Catherine Cho, who over the past decade has also become a close mentor of Goosby’s; their lessons, veering into life in general, can take on the feel of therapy sessions. When she first heard him play, she said, “the level of his talent was clear.”

“You can tell so much by the way someone puts their violin up,” Cho added. “The way he approaches the instrument is very personal. Then when he puts his up and plays a note — you can hear that spark, that he has something to say and he passionately wants to say it. That’s talent.”

So Cho and Perlman took on Goosby as a student, with the goal, Cho said, of “nurturing his gift and not messing it up.”

Successfully not messing it up is more complicated than regular lessons. Beyond technique, Goosby was figuring out work-life balance. He avoided the label “prodigy,” which had been attached to him after the Sphinx competition, referring to it only as “the P-word.” And from his father, he learned the importance of making time for his friends and hobbies, like basketball.

There is still, he thinks, work to do on his sound — an elusive, nearly magical ingredient in music that begins to truly differentiate students when they get to a place like Juilliard, where he is pursuing an Artist Diploma. It was the focus of a recent lesson with Cho, their first together in person after months of Zoom sessions.

The two spoke mostly with poetic language. After he played a showy passage from Coleridge-Taylor Perkinson’s trio of showpieces “Blue/s Forms,” she asked whether he felt fire or coolness, and he responded, “There are so many notes, it comes across as fiery, but on the inside, I think I’m feeling cool.” Then she asked where the energy was coming from, and, after a thoughtful pause, he said, “the lower belly, core area.” The questioning immediately showed in Goosby’s playing, which had audibly greater clarity and focus.

IN A WAY, Goosby could not have made his debut with a big concerto; “Roots” was made last year, when gathering with an orchestra was all but impossible. But even without the pandemic restrictions, he said, he was more interested in telling a story — about the way the artists on his program influenced one another “in a trickle-down effect through time.”

“For me, the easiest way to tell the story would be through something that meant something to me personally,” he said. “I could have recorded all three Brahms sonatas. That story’s been told countless times, and there are people who want to hear that story told a certain way.”

The program is constellatory rather than chronological, beginning in the present with Foley’s foot-tapping earworm “Shelter Island” and continuing with “Blue/s Forms.” Then come the great violinist Jascha Heifetz’s arrangements of songs from Gershwin’s “Porgy and Bess” — along with Dvorak, suggested by the label to offer listeners something familiar — and William Grant Still’s Suite for Violin and Piano; premiere recordings of three warmly melodic and eclectic pieces by Price; an arrangement of Samuel Taylor-Coleridge’s “Deep River”; and Dvorak’s American-inspired Sonatina in G for Violin and Piano. (Zhu Wang is the pianist throughout.)

Some of the works, by virtue of being adapted from songs, bring out the alluring lyricism of Goosby’s playing, which has a tinge of golden-age tenderness and expressive portamento. In the coming season, audiences around the world will hear that voice applied to concertos by Brahms, Bruch, Mozart, Mendelssohn, Beethoven and Joseph Boulogne, Chevalier de Saint-Georges — another long overlooked Black composer.

Goosby signed a multi-album deal with Decca, and it’s likely his next recording will be a concerto program. “We’ve talked about ideas of Mozart and Chevalier de Saint-Georges and Coleridge-Taylor and late Romanticism,” he said.