The next few days offer a drag ballet, an auteur comedy and a whimsical new Netflix drama.

This weekend I have … an hour, and I missed dance 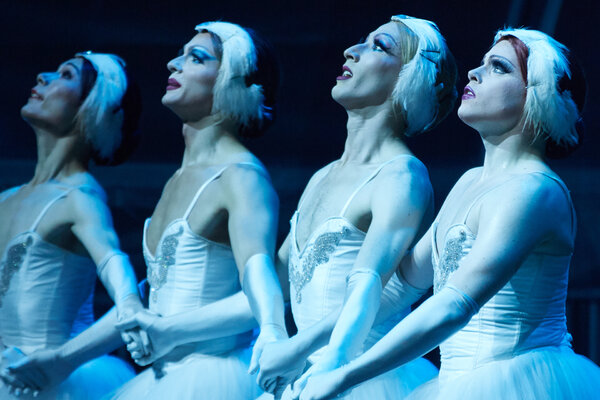 ‘Ballerina Boys’
When to watch: Friday at 9 p.m., on PBS. (Check local listings.)

This upbeat documentary spotlights the all-male dance company Les Ballets Trockadero de Monte Carlo, known as the Trocks, whose members perform classical ballet in drag — subverting, mocking but also embracing the form. Satirizing ballet in general means satirizing many aspects of mainstream society: One needn’t don a tutu to be subjected to rigid gender roles, a strict emphasis on thinness, normative whiteness and systems designed only for the neurotypical. The Trocks push back against all of that, and they do it on pointe. “Ballerina Boys” is also a handy crash course in New York’s queer history and Cold War humor.

‘Work in Progress’
When to watch: Now, on Amazon or Showtime.

Abby McEnany created and stars in this perceptive comedy about a middle-aged lesbian who is planning on killing herself in 180 days if her life doesn’t improve. It’s about sex and intimacy, obsessive-compulsive disorder and anxiety, romance and friendship, and it’s about the ways our self-loathing gets repackaged and sold back to us as self-help. All eight episodes of Season 1 are available to stream in June without a Showtime subscription, and Season 2 will debut later this summer. If you like “Shrill” or “High Maintenance,” or if you like grounded stories but want something that doesn’t feel generic, watch this.

‘Sweet Tooth’
When to watch: Arrives Friday, on Netflix.

“Station Eleven” fans, this is your new jam: a textured pandemic saga that bounces between separate but ultimately connected characters, only this one comes with a robust whimsical side. As if “Hilda” retold “The Walking Dead.” “Sweet Tooth” is set in an America besieged by “the sick,” a virus that killed millions and whose emergence coincided with the birth of “hybrids,” babies born with both human and animal traits. Our hero is Gus (Christian Convery) — half deer, half little boy — whose father raised him in the woods, away from the perils of a broken society. Of course that can’t last, and Gus has to follow his yellow brick road through a ravaged world where people hunt his kind. The show can be brutally dark, and its plague stories are sometimes uncomfortably resonant right now, but it’s also, well, hugely endearing.