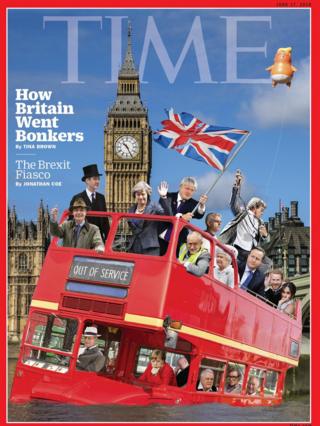 UK artist Cold War Steve has revealed he had to fight for the inclusion of Phil Mitchell, Cilla Black and Bungle in his artwork for Time magazine.

The satirist rose to fame last year with online collages which mixed the chaos of UK politics with pop culture.

It features the Queen, PM Theresa May and Roger Daltrey on a double-decker London bus crashing into the Thames.

MP Boris Johnson is also pictured waving a rather weathered Union Jack flag atop the sinking vehicle, in front of the Houses of Parliament.

Cold War Steve, whose real name is Christopher Spencer, told BBC News he was shopping in his local Asda in Birmingham when the “incredible” email offer came through last week.

“I was in the condiment section and saw it was from Time magazine in New York and I was like, ‘bloody hell! This is it… break the States!'” he says.

“As with Brexit, America and the Trump administration is such a rich seam for my kind of work and we were thinking how on earth would we take this British brand of satire and humour to America?”

The artist, who usually makes his montages in a day on his phone, sat solidly for a week on the computer making three bespoke “typically British” images for the US magazine.

His work was eventually used for both the cover and the main feature, which was titled “How Brexit broke Britain and revealed a country at war with itself”.

It involved a lot of emails being exchanged, “tinkering” with the designs and haggling over which characters a largely US audience would understand, he explains.

“I’ve not worked to such a specific brief before,” explains Spencer, “my work is usually pretty free-flowing – but for this one I had to bear in mind the primary audience is not British and they’re not going to know who Sam Allardyce is or some minor actors on Coronation Street.

“I think in one of the early drafts I put a sleeping Alan Brazil on the back of the bus and they circled it and said ‘who is this?'”

However, some of his own personal favourites, including “everyman” EastEnders character Phil Mitchell – played by actor Steve McFadden – and the late singer and TV presenter Cilla Black, who appear in all of his pieces, were not up for negotiation.

You have to look closely at the cover to find them though.

Mitchell can be seen on the lower deck of the bus, pictured behind Angela Merkel, while Black’s tiny head can be just about spotted behind the Duke of Edinburgh.

Spencer adds: “Steve’s not well known at all in America but they knew he had to be in there, the battle was how prominent he would be in the scene and he’s gone from being fairly central to down on the bottom, but he’s in there, which is the main thing.

“I think I had to stamp some Cold War Steve on there, otherwise they could’ve done it themselves.” 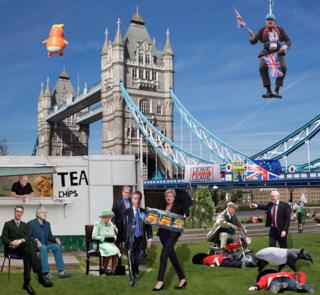 Unlike Mitchell and Black, Bungle from the 80s kids’ TV programme Rainbow does not feature in the cover art, but does appear in one of his pieces seen inside the magazine.

“There was a circle around Bungle and we had an email about whether or not Bungle is a person or an animal.

“I said ‘does it matter?’ It’s someone in a giant bear costume selling tea!

“So yeah, there was a line drawn for Bungle, Cilla and Steve!

“I’m conscious of not selling out as I have such a great audience on Twitter who’ve grown with me from the early days, so I’ve got to have them in my mind.”

Earlier in the year, the artist told the BBC his work “started as a coping mechanism,” but that the overriding factor was that he wanted “it to be funny and amusing more than anything”.

Time Magazine has historically carried a range of provocative images on its cover, including US President Donald Trump, boxing champion Mohammed Ali being shot with arrows and practically naked images of John Lennon and Janet Jackson.

Others have included the exclusive story of Ellen DeGeneres coming out as gay, Kanye West made up to look like Jesus Christ with a crown of thorns, and Adolf Hitler.

The magazine described Spencer’s work as being “synonymous with the frenzied zeitgeist of Brexit-era Britain”. 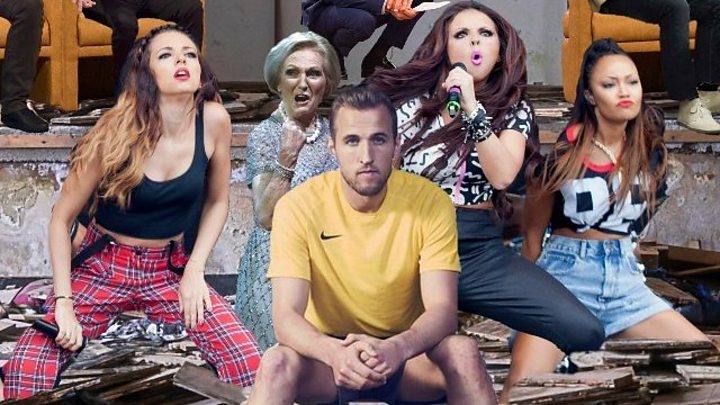 The country remains divided over Brexit. Labour narrowly beat the Brexit Party to hold their seat in the Peterborough by-election on Thursday, but Nigel Farage’s new organisation came out on top in the European elections last month, taking 32% of the vote.

The UK was originally meant to leave the European Union on 29 March this year but that was then pushed back to 12 April and eventually 31 October after the PM failed to get MPs to approve her deal.

Speaking outside Downing Street last month, Mrs May – who officially steps down as leader on Friday – she said that it was “matter of deep regret” that she had failed to deliver Brexit.

Before making his own artistic Brexit breakthrough as Cold War Steve, Spencer struggled for years and admits he actually used to mock up Time Magazine “person of the year” covers.

While evidently not a fan of the result of the EU referendum, the cult figure admits that this turbulent period of British history has been “one of the best” for him on a professional level.

It’s provided him with “the opportunity to satirise the crazy times we’re in”.