Growing up in Bedford-Stuyvesant in the 1980s, the artist Kambui Olujimi had a fulfilled childhood in the span of a single block, on Quincy Street.

Families shared cultural roots in the South and the Caribbean. The children played together, clustering by age, using the biggest tree on the block as home base for games of hot-peas-and-butter and freeze tag. Parents kept an eye on all the kids.

Bed-Stuy in those days was a patchwork, Mr. Olujimi recalled. Some blocks were derelict and dangerous. But Quincy Street between Patchen Avenue and Malcolm X Boulevard was the other kind: vibrant with family and community life.

“This block was tight,” Mr. Olujimi said. “This was a block.”

Mr. Olujimi’s work is eclectic — spanning sculpture, installation, drawing, photography, video — but it often addresses collective memory and how it blurs or gets erased.

For the last six years, he has turned that attention to the block that forged him, where he spent most of his childhood and then returned for 20 years of adult life, until 2015. His tribute to the block takes the form of repeated portraits of a single person at its core: Catherine Arline, the longtime block president universally known as “Ms. Arline,” who died in 2014 at age 77.

“Walk With Me,” his series of 177 portraits, all painted in ink on 11 x 14-inch paper, is now on view at the nonprofit Project for Empty Space, in Newark, and in an online tour. Based on a single source image — a photograph of Ms. Arline at age 18, when she was newly arrived in New York City from North Carolina — they are at once uniform and endlessly varied. 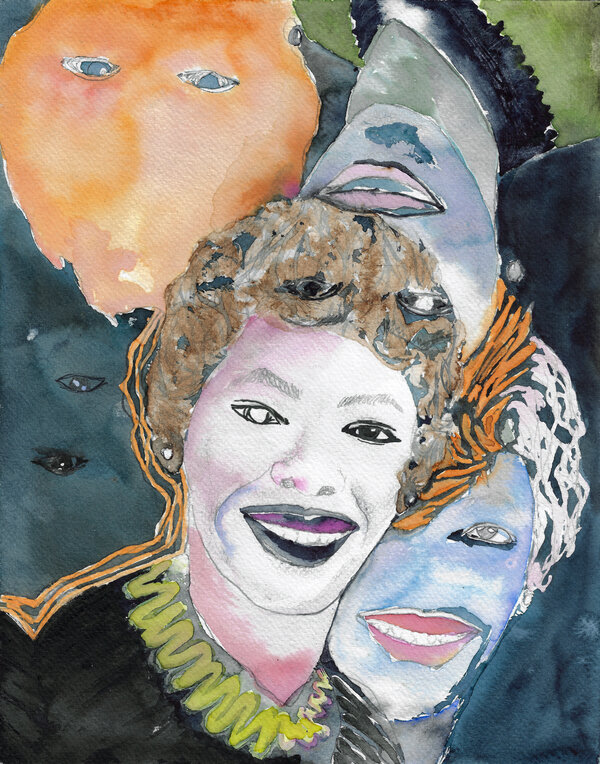 Initiated in grief, the series is a mourning practice that has carried Mr. Olujimi through the political and social turmoil of the last few years, opening new artistic directions for him. But it is also an experiment in memory work — an effort to convey something of the soul of a local community, through repetition and variations on an icon.

On a bright afternoon in the fall, Mr. Olujimi, who is 44 and now lives in Queens, paid a visit to the block. Tall and lanky, he cut a sharp figure as he strolled, wearing an indigo-and-white coat of his design. Old folks, pleased to see him, chatted away from their stoops. A young woman walking to her car crossed the street to hug him and exchange family updates.

“There’s a whole geography based on who used to live here,” he said.

In front of one house, he remembered how the Dobermans got out once, causing “pandemonium for the under-10 set.” He recalled the man who drove elders to visit relatives down South in his van, the man who distributed the fish he caught to his neighbors, and a long roster of childhood friends, with nicknames and notable incidents.

As he mapped the stories to houses, he seemed surprised at his recall. “I thought I was only going to be able to point out four or five,” he said. “It’s like I didn’t really go nowhere.”

In the well-upholstered parlor of the Rev. J.T. Mitchell’s house, Mr. Olujimi and the pastor, another mainstay, whose church, Holy Trinity Universal, is also on the block, reminisced about Ms. Arline’s presence in this community.

A social worker for the city by day, she ran the block association, turned an empty lot into a community garden, organized permits for block parties and collections for families in need. She led a liaison committee with the police precinct, buttonholed elected officials, and drove around in her burgundy Buick Skylark, endlessly energetic.

“She wore many hats,” Rev. Mitchell said. “Up early, sleep late, even after she retired we had to make her sit down and get some rest.” Since her death, he said, “our block hasn’t been the same, and it won’t be the same.”

That role — unsung, undefined — ensured the block’s cohesion, Mr. Olujimi said. “You saw Ms. Arline making sure we’re not going to skip over anything.” Without someone like her to initiate and follow through on projects, he added, “it’s not going to do itself.”

Mr. Olujimi grew especially close to Ms. Arline after he became her tenant, when he moved into her building as a 19-year-old college dropout. “She had a belief in who I would be,” he said. He remained her tenant until she passed away.

Their bond — people wondered if he was her son, he said — bolstered him as he completed his studies, worked as a freelance photographer, and built an art career. After she died from a heart attack, making portraits, he said, was his only way through the grief.

“I’d wake up and start crying,” he said. He had not worked in ink before; he drew solace from the new medium, and from the repetition. “It was quieting that I was just doing this one thing,” he said.

Mr. Olujimi’s portrait series starts sober, the early entries often literal, in black or blue ink. But soon he was applying color washes, emphasizing traits, blurring others, doubling or tripling his subject’s likeness. With rich colors and deconstructive verve in the later portraits, the series recalls a jazz piece that improvises on a theme toward a raucous, polyphonal resolution.

Only through this process, in his view, did “Walk With Me” become a representation of Ms. Arline — and of her community.

“You may see someone a hundred times but they’re different everyday,” he said. “These works rely on multiple visits, duration, time, and often other people and their vantage points.” Aspects of Ms. Arline in the paintings reflect not only his own interactions, but the way others on the block spoke of her. The expression is the artist’s, but the memory is collective.

The series functions as a form of civic remembrance. Jasmine Wahi, the co-director of Project for Empty Space, who curated the exhibition, called the series a kind of alternative monument. “What does it mean to create a monument for someone who is so impactful at a micro-community level?” Ms. Wahi said. “In examining multiples of a single person, the series speaks more than any statue could.”

“Ms. Arline was herself a monument to memory,” said the artist Christopher Myers, a friend of Mr. Olujimi who met the subject many times. “She lived not only in the stories that she told of her own childhood and arriving in New York, but she also functioned as the memory of that community on Quincy Street. She is, in some ways, Kambui’s memory.”

Ms. Arline also shaped Mr. Olujimi’s path as an artist. When he moved into her building, in 1996, it was a return to the block after several years on the move. During high school, he had gone to live with elder siblings, first in Boston and then on an American base in Germany; he started studies at Bard College, but was dissatisfied and dropped out.

With her guidance — and below-market rent — he returned to school at Parsons, majoring in photography. Soon he was working with artists. He was director of photography on projects by Wangechi Mutu and Coco Fusco; he co-directed a 2005 stop-motion short, “Winter in America,” with Hank Willis Thomas, another friend. His first solo show came the next year.

Ms. Arline was there. “She came to every show I had in New York,” he said. His interest in serial, durational work, he said, owed to her life lessons about patience.

Others on Quincy Street helped the artist in practical ways. The man with the van helped ferry materials. The church offered space to hang works-in-progress. Rev. Mitchell said, “He represents us.”

Mr. Olujimi earned his M.F.A. from Columbia University in 2013, and he has shown widely since, but he has not been embraced by the art market as many of his friends have — which may in part be the result of his temperament, in their view.

“The world doesn’t know what to do with sincere Black men,” Mr. Thomas said. “ He’s brought that same spirit he learned on the block into everything he does — that if it’s not real, you don’t do it.”

In his studio in Long Island City, Queens, a modest space up a narrow flight of stairs, Mr. Olujimi showed some work in progress, products of the pandemic year.

A series of small-scale “Quarantine Paintings” addresses violence in Minneapolis and Kenosha, grave-digging at the Hart Island potter’s field, as well as grotesque doings of the Trump family.

Larger, more majestic works use painting and collage to depict Black bodies in outer space, experiencing the liberation of weightlessness, against constellations and infinite dark skies, in a state of what he calls Black Rhapsody.

The medium — ink, augmented by pigments that he mixes — is one he learned making his portraits of Ms. Arline. And the lines, the blurred and duplicated figures, the glint in their eyes, carry distinct echoes of that series.

Years after her passing, she walks with him.

“That was her gift to me as she left,” he said.