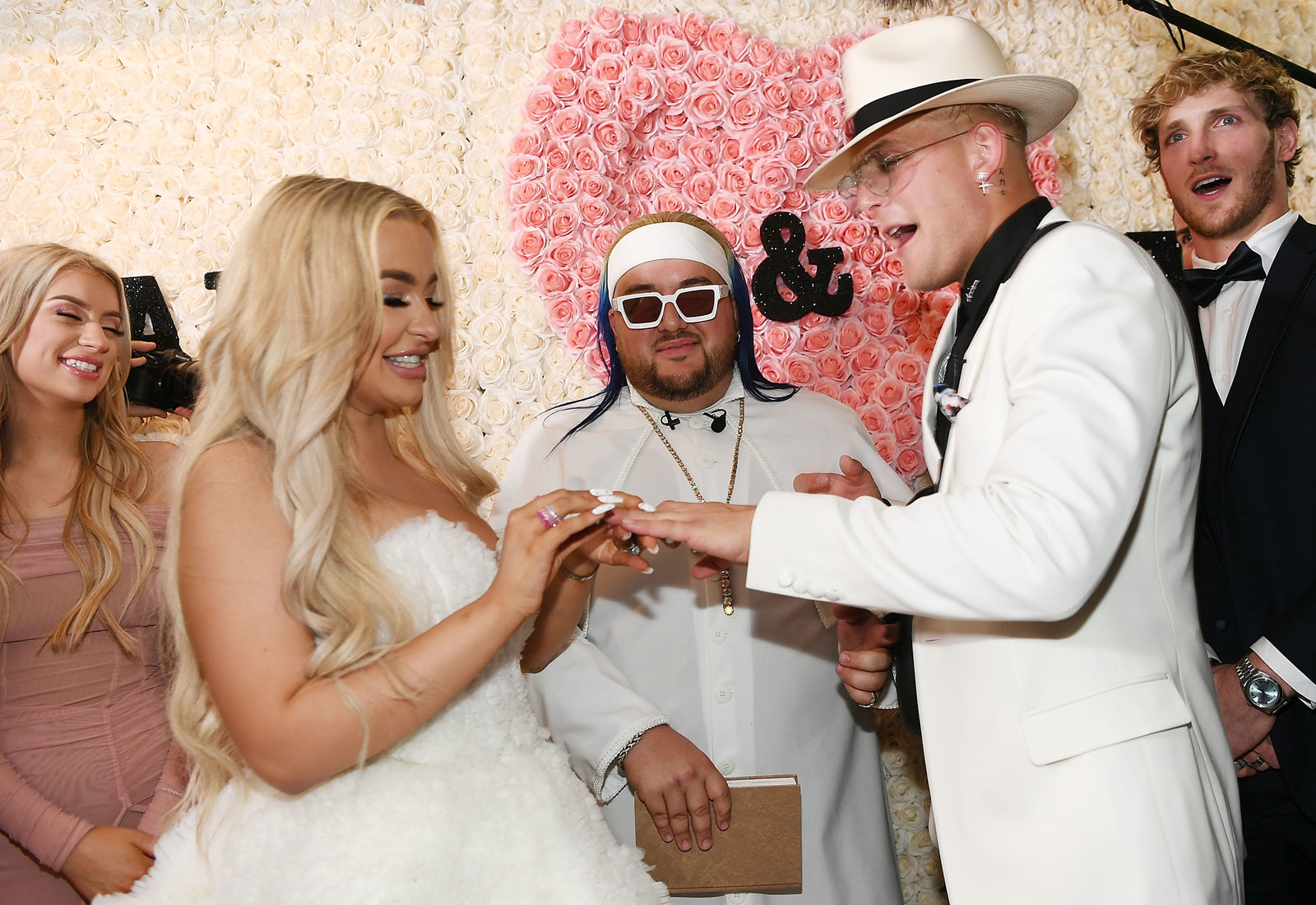 Tana Mongeau and Jake Paul and Logan Paul at their wedding.

If you weren’t one of the 66,000 people who paid anywhere from $50-$75 to watch the livestream of the wedding between Jake Paul and Tana Mongeau earlier this week — or even if you have no idea who they are — there’s still a pretty good chance you caught some of the less-than-glowing press coverage that followed. There was so much backlash partly because of why these two are famous to begin with: Jake Paul is Logan Paul’s brother, and a YouTube star in his own right, while Mongeau dated Bella Thorne and got her own MTV show, No Filter: Tana Turns 21, about…being a celebrity Youtuber.

Paul and Mongeau have only been dating (or at least saying they’re dating) since April, so their engagement, announced last month, was greeted with lots of skepticism. The resulting wedding, a cheaply sponsored affair featuring Oprah and Bruno Mars impersonators and culminating with a big fight, did nothing to dispel widespread feelings that this was all a publicity stunt designed to promote Mongeau’s show. (Even Logan Paul described his brother’s wedding as “pre-emptive,” which he seemed to think means premature).

Of course, some onlookers are merely annoyed because they suspect that being a YouTube star and getting on reality TV are scams requiring little talent. (See Tanacon.) But the chatter about the faux wedding — and its role in promoting Mongeau’s show — arguably also speaks to bigger questions and gendered anxieties about the ongoing intertwinement of fame, commerce, and identity.

Announcing significant life events on social media is commonplace now. And yet as people (mostly women) of varying levels of celebrity collaborate with brands to monetize their engagements, pregnancy announcements and weddings, mini-backlashes occasionally erupt. (The staged engagement of influencer and blindingly white Goop employee Marissa Fuchs — which her boyfriend had pitched to potential sponsors months in advance — allegedly got her exiled from the industry for tackiness.)

These controversies, however, predate influencers and social media. There have been arguments about the inauthenticity of celebrity weddings since at least the era of old Hollywood and Liz Taylor. Moralistic reactions to suspected stunt weddings, which seem to coalesce at moments when the entertainment industry and cultural mores are dramatically changing, tell us as much about ourselves as they do about the celebrities — usually women — who become the objects of public outrage. 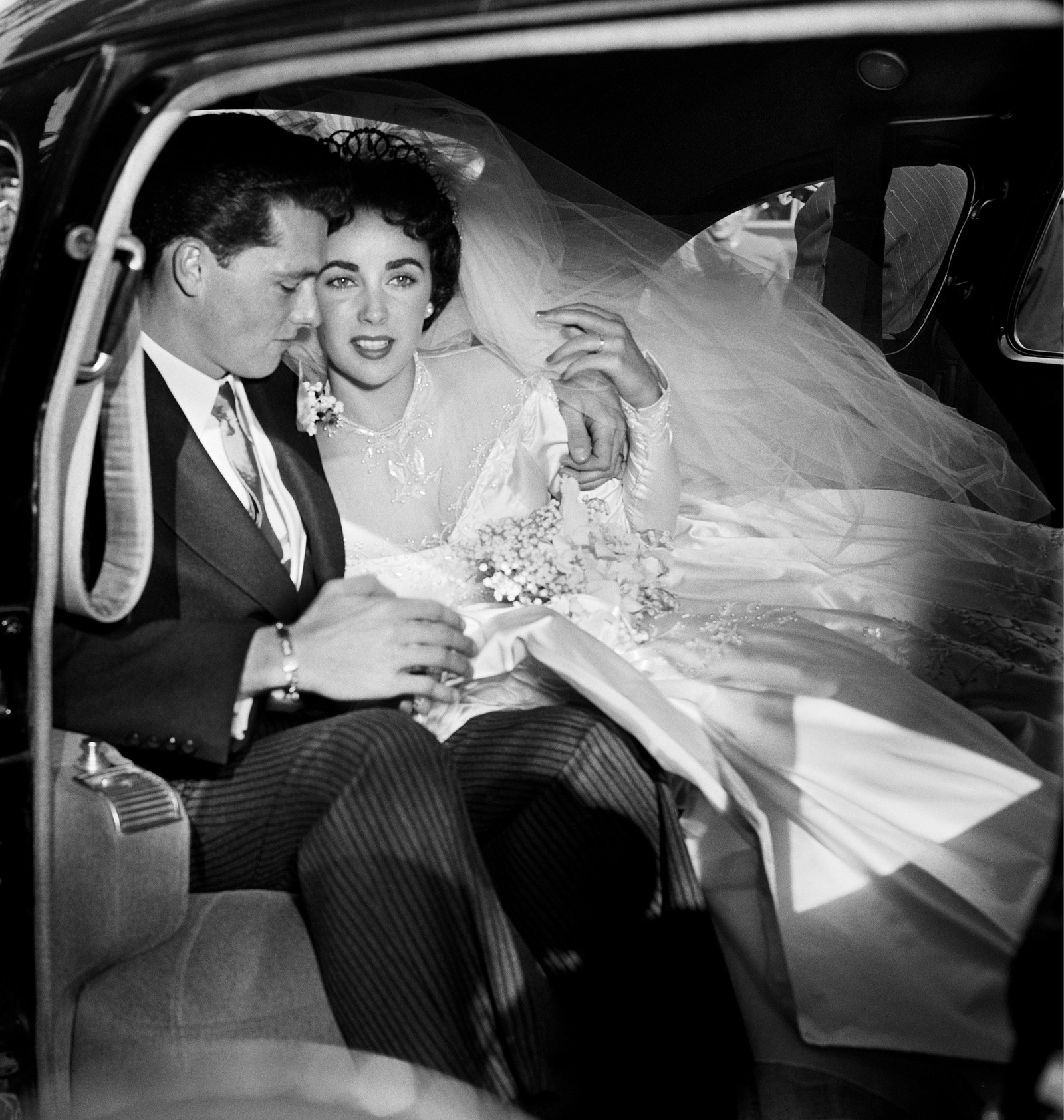 Ultimately, all weddings are for show: They’re often-flamboyant displays of — historically — heterosexuality, involving men and women. Yet negative reactions to high-profile weddings that the public sees (for whatever reason) as stunts have tended to be directed more at women than at the men they’re marrying. Weddings are still culturally understood to be women’s business, as the figure of the Bridezilla — the engine of so many episodes of reality television — makes clear.

Long before reality television, Elizabeth Taylor, often described as a pioneer of modern celebrity, became as famous for her marriages as she was for her movies. Arguably her most famous marriage moment was her “stealing” Eddie Fisher from Debbie Reynolds. But her first marriage, in 1950 at age 18, was equally controversial and was one of the first “stunt” weddings.

In a twist that speaks to our reality TV moment, Taylor married Paris Hilton’s great-uncle “Nicky” Hilton, Jr., a famous socialite playboy. She and executives at MGM used the wedding, which took place in Beverly Hills, to promote her role in Father of the Bride; the studio even paid for the $3500 dress. But after just about six months of marriage she filed for divorce, at a time when divorce was still heavily stigmatized.

Taylor withstood a massive public backlash; Photoplay magazine blamed her for the marriage’s demise, and chastised her in the breathlessly moralistic — and misogynist — language of fan magazines, describing her as “willful, flighty and headstrong.” They also scolded her for stepping out at an event with a famous director: “With the rift from Nicky so new, she should have stayed at home, preferably weeping.” (She later called her decision to marry “naive.”)

In retrospect, the backlash against Taylor spoke to the way she was not just an actor, but a celebrity who — like Kim Kardashian and, um, Mongeau nowadays — blurred the boundaries between commercial and “sacred” spheres that women above all were meant to keep private.

Kim Kardashian, who has sometimes playfully evoked Taylor’s wedding iconography in her social media, found herself in a similar situation when her massively orchestrated 2010 marriage to Kris Humphries came apart after only 72 days of living together. It’s easy to forget, in the aftermath of so many other Kardashian controversies since, but the Kardashian wedding stunt was touted as one of the ultimate examples of celebrity fakeness.

A petition asking E! to take the show off the air got thousands of signatures. “We feel these shows are mostly staged and place an emphasis on vanity, greed, promiscuity, vulgarity, and over-the-top conspicuous consumption,” wrote the petition creator. In a piece about the frivolity of the news cycle, Frank Bruni jokingly described Kardashian as “the nation’s poster girl for old-fashioned virtues,” and faux-chastised her for bringing “something less than steadfast and humble commitment to her marriage.” (He made no such comments about Humphries).

PR experts speculated that this could be the controversy that would end the reality-TV dominance of Keeping Up With The Kardashians. “It’s one thing for reality stars to exaggerate something for an episode, it’s another thing to go through with the marriage just to concoct a TV special,” said one. “This could be the time when the line gets crossed.”

Kardashian felt the need to defend herself for years afterward. “If this was a business decision and I really made all that money that everyone was claiming that we made off this wedding, and if the wedding was fake and just for TV — if I’m a smart businesswoman, I would have stayed married longer,” she explained on “Live! with Kelly” two years later. “This was a bad business decision.”

The wedding controversy even earned Kardashian her first Oprah sit-down, where she and momager Kris were grilled about it. But, ultimately, the interview was their chance to own the narrative on their terms. Now Kardashian’s celebrity is not even remotely defined by that moment. Ultimately, Kardashian, like Taylor, was rich and powerful enough to rebound from incident. But that’s not always the case, and raises the more interesting question of who gets to benefit from these kind of controversies. 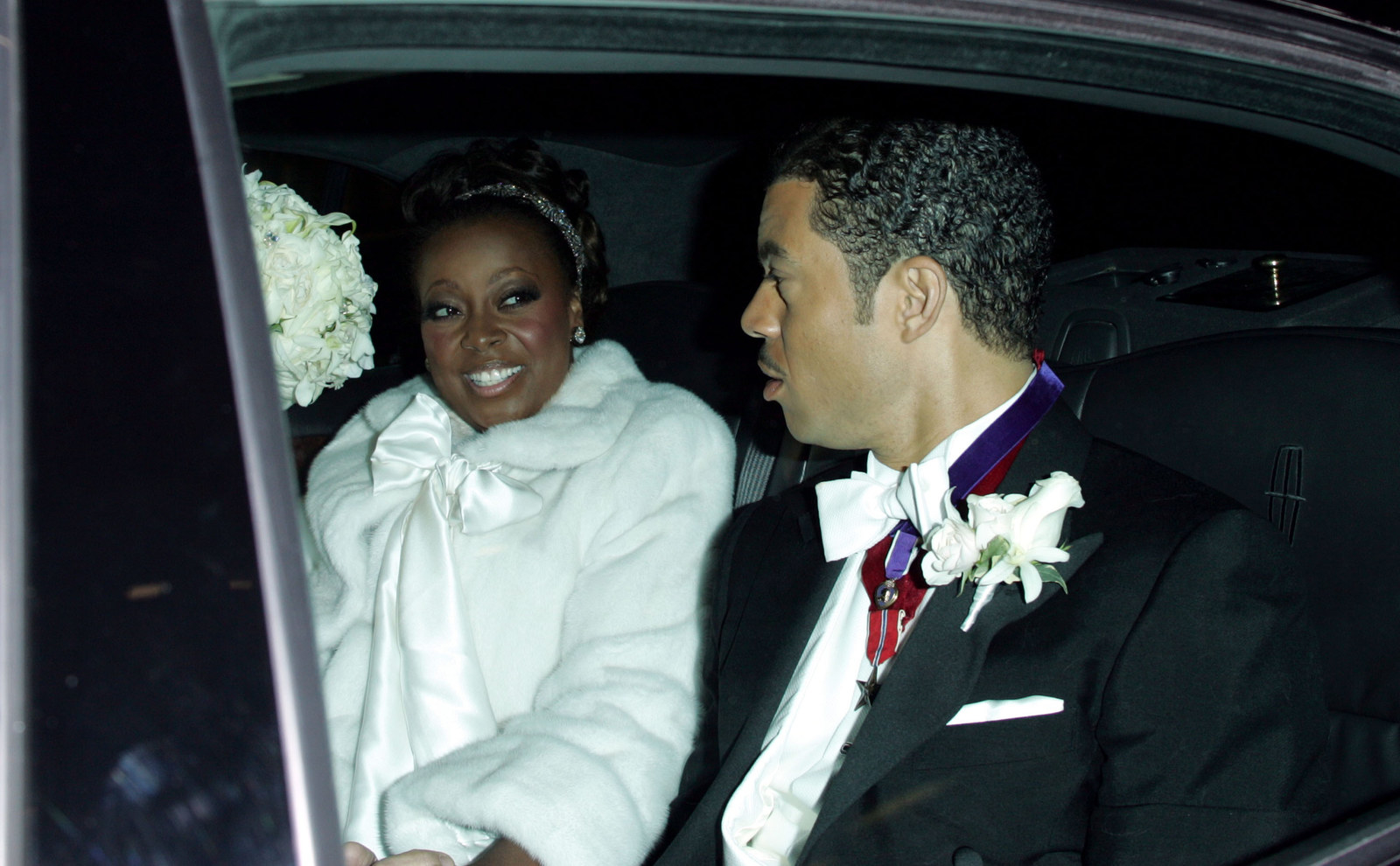 Star Jones and Al Reynolds on their wedding day.

In contrast to Liz Taylor or Kim Kardashian, Real Housewives of Orange County castmate Gretchen Rossi was, at best, a Z-lister when she got caught up in her own stunt wedding drama in 2016. After her engagement to Slade Smiley, a smarmy-hot (forgive me) perpetual Housewives hanger-on who seemed to only date women on the show, she was accused by her fellow castmates of staging the engagement for a storyline. She was booted off the series after the following season.

It doesn’t really matter whether or not Rossi timed the engagement to get it on the show (she probably did). The point is that faux-marriage moralizing coalesces in gendered ways that are seemingly never applied to men. This is in part because the wedding industrial complex is focused around women; there’s no groomzilla tradition, even when people cheer the end of a male celebrity’s bachelorhood. (And then turn their wives into celebrities.) It’s a reality that wedding content has been one of the biggest ways that mainstream culture celebrates white hetero femininity, so of course women will use it to make a storyline — or content — out of it.

However, this is all further complicated when women who are not white attempt to participate in that economy. Which brings us to the one-time queen of daytime TV, Star Jones. For years, Jones was a charismatic presence on The View, and she used her perch on the show to pioneer spon-con for her 2004 wedding to Al Reynolds. She even made Continental Airlines their official wedding airline, and there were show segments about her preparation. “It became a lot about the wedding, which really changed the format of the show,” co-host Joy Behar revealed in a recent book about The View.

The tabloids loved the story, framing Jones as a grasping Bridezilla “selling her wedding to the highest bidders.” Just one season later, executives wanted her off the show because she had apparently lost her relatability with the show’s audience (of primarily white women). “The network came to us and said that the research on Star was very bad and getting worse—not because of what she had done on the program, but because of her outside life,” Walters told People. The magazine reported Walters was “alluding to the controversy surrounding Reynolds over her reported penchant for free products and shameless self-promotion.”

The firing also coincided with Jones’ massive weight loss, which she refused to acknowledge was a result of gastric bypass surgery at the time, angering her co-hosts. After hiring the publicist that inspired Scandal, Jones dramatically announced her departure from the show on the air — in one of the most riveting moments ever in the history of the show — in an attempt to leave on her own terms.

What the Star Jones saga made clear is that these stunt wedding outrages can have real repercussions, and can define someone’s career, when light-hearted frivolity suddenly becomes seen as a problem — too scammy, too “shameless.” (And in a country where black women are so easily and often criminalized as scammers, it raises questions about who gets to benefit from the “innocent” entertainment of wedding content).

To return to the current brouhaha, while Jake Paul refused to talk to reporters at the Las Vegas wedding, Mongeau said she was hopeful about their chances. But people have also pointed out that in the fourth episode of her reality show, she says her relationship with Paul is “something fun and lighthearted that we are obviously doing for fun and for content.” In a rather meta moment, she tells her manager that both she and Jake have this “unspoken premise of like, ‘It’s like a Kim Kardashian, 72 day marriage.’” Unlike some of the celebrity women who blazed a trail toward sponsorship deals and tabloid infamy before her, Mongeau is purposely stoking the faux wedding narrative to her advantage — and she’s reaping the rewards. You’re here reading about her, aren’t you? ●