Like his character in the Pixar hit “Luca,” Jack Dylan Grazer is taking steps toward living his truth.

The “We Are Who We Are” and “Shazam!” actor ﻿spoke about his sexuality for the first time publicly last week, telling fans via Instagram Live that he is bisexual.

A snippet of the Q&A shows the 17-year-old Los Angeles native responding to a fan who asked if he identifies as gay.

“I’m bi…” he replied, before exclaiming, “Silenzio, Bruno!” ― a clear reference to “Luca” and its most memorable line.

Fans also noticed that the actor has since listed “he/they” as his preferred pronouns on his Instagram page.

Grazer’s revelation came amid a flurry of online speculation that “Luca,” released on Disney+ last month, is a coded (if kid-friendly) take on the LGBTQ experience.

The movie, which features the voices of Sacha Baron Cohen and Maya Rudolph, follows the misadventures of Luca Paguro (Jacob Tremblay) and Alberto Scorfano (Grazer), two young sea monsters who set out to explore life on land upon discovering they share an ability to assume human form.

“Finally, Disney might actually venture into queer storytelling, a vast landscape of human experience that the studio has only meekly (and smugly) gestured toward in recent years,” observed Vanity Fair. The New York Times cheekily ran its glowing review of the film under the headline “Calamari by Your Name,” a wink at the 2017 gay romantic drama “Call Me by Your Name.” 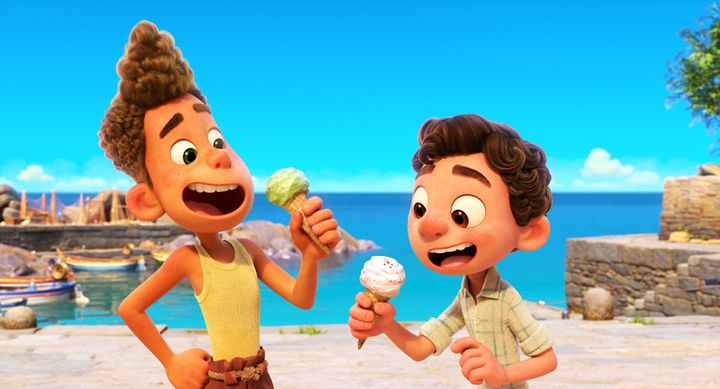 Director Enrico Casarosa, however, has insisted that the relationship between Luca and Alberto is strictly platonic.

“It’s also specifically a little bit pre-romance,” he told Out magazine last month. “That was something that I was interested in as well because there’s just that moment that maybe we’re not thinking about boyfriends and girlfriends yet, which is really more about friendships.”

In a separate interview with Yahoo Entertainment, he added, “It’s a story with kids where we stay in the world of kids,” he added.

“Alberto and Luca are friends,” he told Cinema Blend. “I know for a fact that there will be dirty fan fiction, but I’m not talking about that while I’m promoting the movie.”

Still, he didn’t object to the prospect of deepening Luca and Alberto’s relationship in the future, noting it would “be cool if we got back together and fell in love” in a sequel.