With the release of her timely medieval epic inspired by a true story, Jodie Comer talks to Stylist about why this was such an important role for her.

Jodie Comer is having quite the 2021. The Liverpudlian actor has starred in one of the most moving and important dramas of the year, Help, about the care home crisis during Covid, shot the fourth and final series, of Killing Eve, alongside Sandra Oh, and established herself as a major player in Hollywood. Firstly, in summer blockbuster Free Guy alongside Ryan Reynolds and now in major period drama The Last Duel with Adam Driver, Ben Affleck and Matt Damon.

It tells the story of real-life historical figure Marguerite de Carrouges (Comer) who accuses Jacques Le Gris (Driver) of rape, and the subsequent duel to death he has with Marguerite’s husband in 1386. Based on Eric Jager’s bestseller, The Last Duel: A True Story of Trial by Combat in Medieval France, and directed by iconic director Ridley Scott (Alien, Gladiator, Thelma and Louise) and written by Nicole Holofcener, Damon and Affleck it’s a medieval epic with a woman’s fight to be heard at its centre.

Jodie speaks to Stylist about the importance of giving women a voice and working with some of the biggest names in the business. 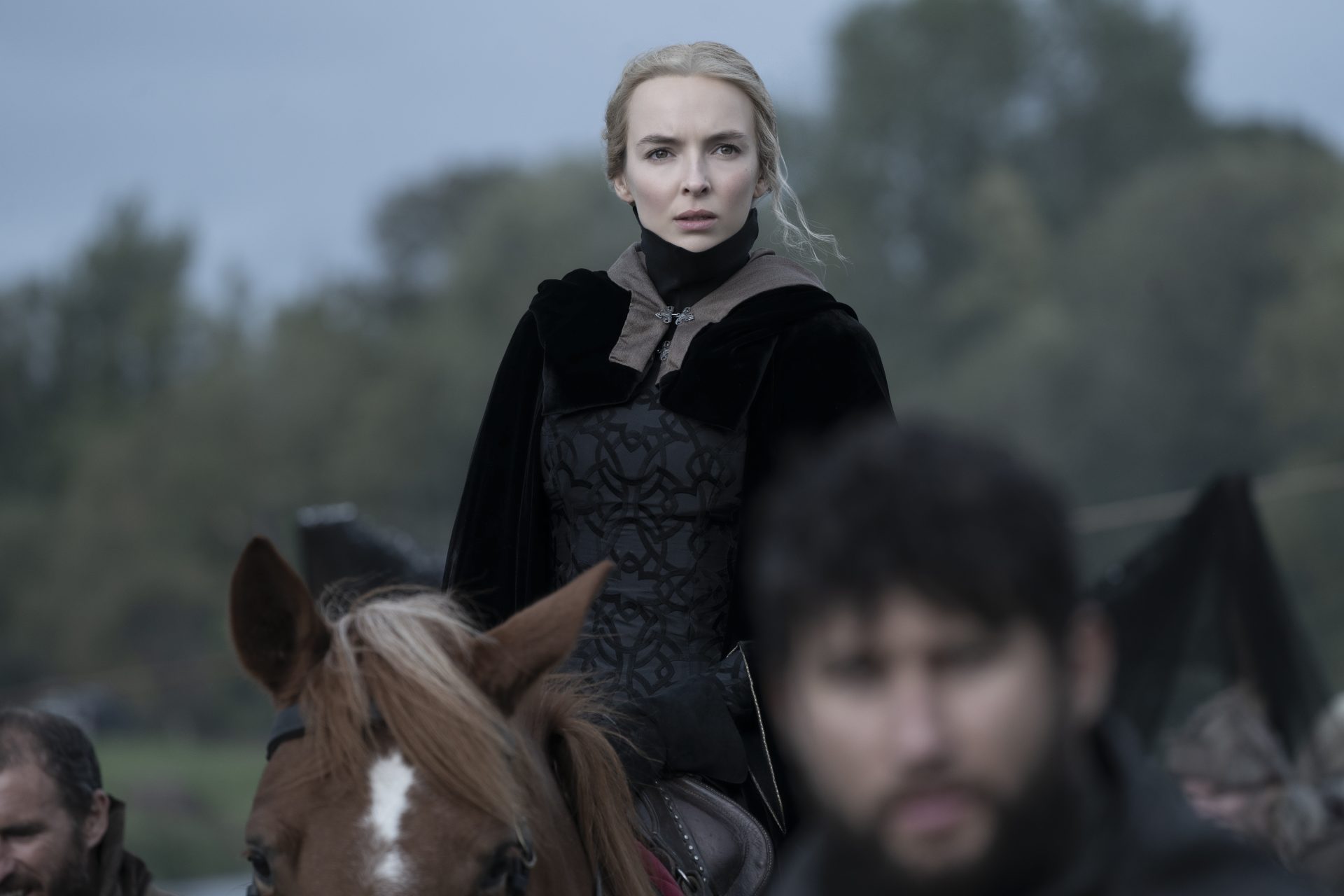 Jodie Comer as Marguerite de Carrouges in The Last Duel

Stylist: What makes this film distinct is that the rape of Marguerite is told from each of the protagonists’ perspectives. Why is that important?

Jodie Comer: This isn’t a film saying: here are three opinions about what happened, go away and choose who you think is telling the truth. It’s very clear who is telling the truth. I thought it was fascinating to be able to hold a mirror up to society, and ourselves, and [show] that we can both come away from an experience and two people can have very different accounts of what happened. It’s incredibly nuanced; the changes and the shifts are so minute, so it hangs on that being handled with care and correctly.

When you appeared on the cover of Stylist this summer, you talked about how one thing you liked was that Marguerite’s character wasn’t ‘just the wife’. Can you tell me more about that…

It was really interesting to me how there was this great book and this huge historical event that happened because of an attack on a woman and yet there was still so little written or known about her. So, it was really important to us that she was a fully fleshed-out character and this terrible thing that happens to her – she isn’t defined by it and she stands up and she’s resilient. 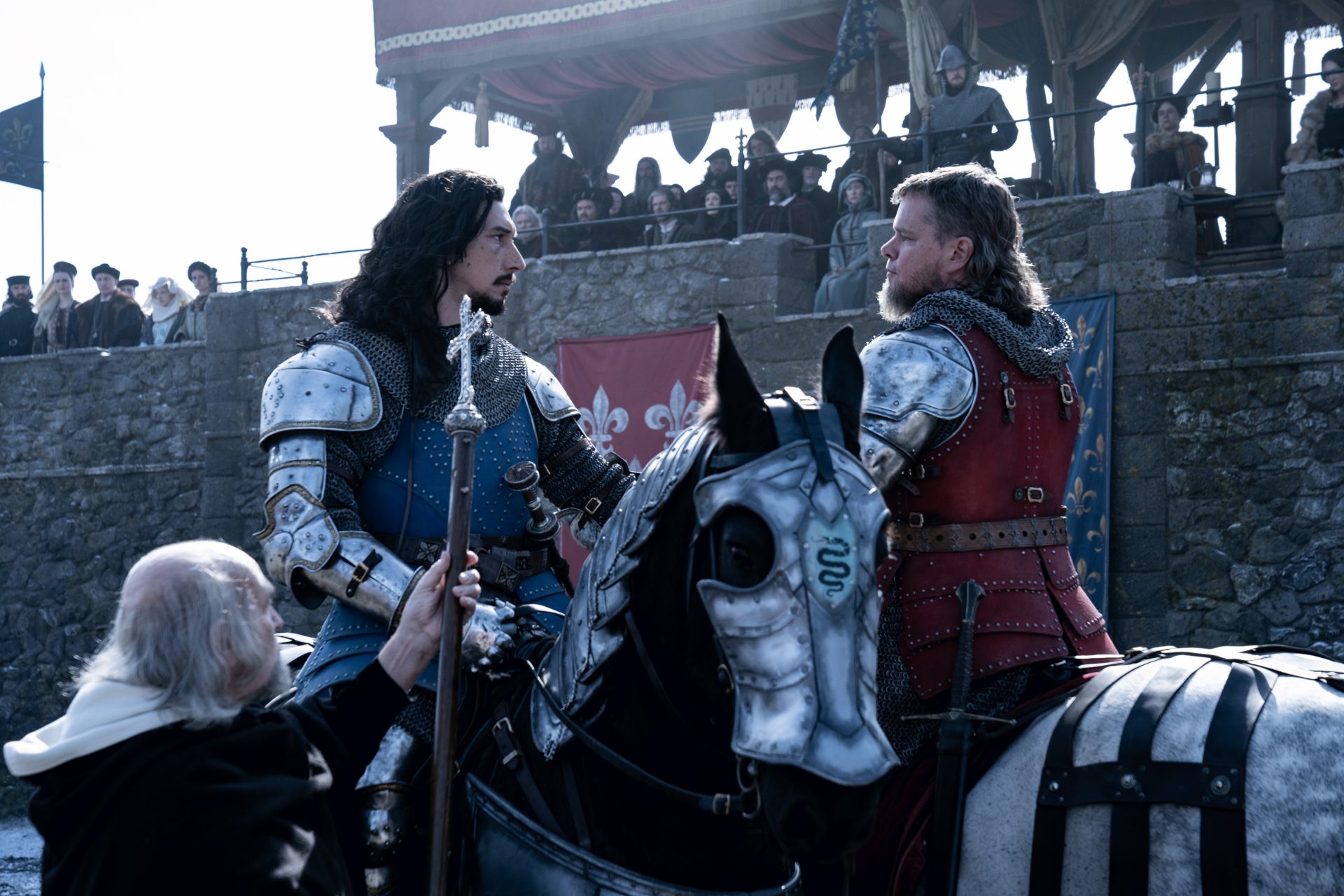 Adam Driver and Matt Damon in The Last Duel

The rape scene is particularly traumatic. How did you approach filming that?

We had an amazing intimacy coordinator called Ita O’Brien and she’s worked on Sex Education, I May Destroy You and I Hate Suzie; so many incredible things that have tackled really difficult subjects. We were so lucky to have her on board, and so it was having conversations with her about what I was comfortable with, what I wasn’t. The night before shooting those scenes, Adam and I went to set with Ridley and blocked out the physicality of it. Then the next day me and Adam had a conversation and said: if there’s anything that either of us aren’t comfortable with, we’ll let each other know. But we had a respect for each other and trust in one another and we both felt very safe.

There must be something quite empowering in being able to own that moment.

When that duty of care is at the forefront of everyone’s mind it means a lot. And then we were filming in Dalkey in Ireland, which is the most magical place, so I used to go swimming in the sea after. It was freezing, but that’s how I shook it off. I’d go in the sea then go and make myself some wholesome food.

On the red carpet for The Last Duel

Marguerite was a woman who used her voice at a time when women weren’t given a voice, when in fact they were denied basic humanity. How do you feel about what she did?

For any woman, at any time, to speak out in the way that she did is hugely admirable. But especially when you look at the history of that time:what happened to her wasn’t considered a crime against a woman, it was considered a crime against her minder, her husband. And he would actually, more times than not, be compensated with money for the embarrassment that his wife had caused by coming out and speaking this way. So, when you realise the stakes she was up against and yet still wanted to speak out for what was wrongly done to her… I think that in itself speaks volumes to who she was. There’s a solemn and gentle moment that she has at the very end of the film before the duel is about to happen, a spark of regret where she asks ‘Have I done the right thing? Now I can see why many women before me have not done what I’ve done because now my own life is at stake and so is my child’s. I felt really empowered through her.

I feel like each character gives you something. I could say the same for Sarah for in Help, which was just out on Channel 4, and her transition through that film and how she found her voice. I think you always do take something away, and it isn’t always conscious, or it could be a couple of years down the line. I feel like I grew up a lot on this set; I felt like I really came into my own and owned my own space.

He would be compensated for the embarrassment!The word embarrassment in particular filled me with so much anger. You can’t imagine how that was able to happen and that she has to seek her husband’s help in order to speak up in this way. She can’t do it on her own.

Horrifyingly so much of the film still feels relevant today – about believing women, about violence against women and an imbalance of power…

That’s why we had to be very careful in how we told this story because there are going to be many people who watch this and relate to it in some way. I think the saddest thing is, and you could say that for any decade that’s gone by, is that we have come so far but yet there really is still so much more to do. It’s a Ridley film and it’s such a spectacle and it’s so visually beautiful, but at the heart of it is a woman’s fight for justice.

The film premiered in Venice with a full red carpet. How did that feel after such a long time of staying at home wearing comfy clothes?

It was amazing! It was so much fun to see the team. Plus, the last time I was in Venice I was a kid, so I can’t remember it nor did I probably appreciate it as much as I should have. I felt present, I felt calm. Sometimes I can get a bit nervous and get lost in it all, but I felt present which was so nice.

The Last Duel is in cinemas nationwide on Friday 15 October