Yes, Joel Grey is mainly an actor and director, perhaps forever best known for his indelible portrayal of the M.C. in the musical “Cabaret” and, most recently for directing the acclaimed Yiddish version of “Fiddler on the Roof.”

But Mr. Grey has also steadily — and more quietly — built something of a side career as a photographer over the last 16 years, with his work featured in books, gallery shows and even in the permanent collection of the Whitney Museum of American Art.

Mr. Grey, 87, also likes to be around artists and has befriended several — namely David Hockney, Jim Dine and R.B. Kitaj — who have encouraged his artwork and sold him some of their own.

Mr. Grey recently released his fifth book of photographs, “The Flower Whisperer,” published by PowerHouse Books. And he has opened a companion photo exhibition at Staley-Wise Gallery in SoHo.

The photographs, featuring the inner workings of vibrantly colored flowers, were all taken on his cellphone and have the shimmering quality of watercolors. 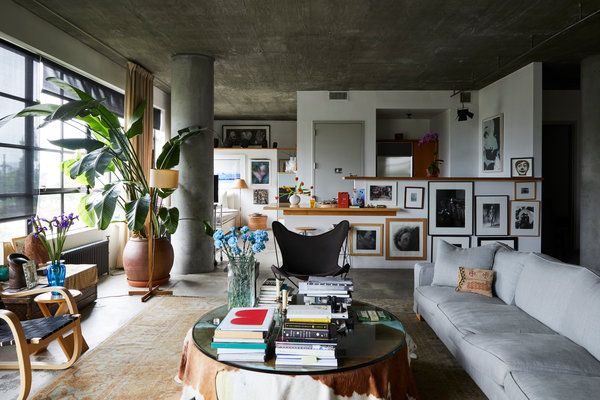 “I would have been a watercolorist,” Mr. Grey said, “had I had the talent.”

The walls of his West Village loft overlooking the Hudson River are filled with art he has made and collected — including African sculptures that cover an entryway table; black-and-white photographs outside the open kitchen; Miró drawings in the guest bathroom. There is a rag by Richard Tuttle that he bought from the dealer Betty Parsons; a paper doughnut by Robert Rauschenberg; ladders by Bruce Robbins; and an abstract by Thomas Stokes.

These are edited excerpts from the conversation.

Tell me about the Rauschenberg.

I love it. One of his assistants sent me a note that said: “The best way to carry the thing around is crumpled up in a paper bag like dirty laundry.”

When do you do it?

I’ve always loved it. I was a very good finger painter.

Did you grow up around art?

When I was 7 or 8 I went to the Cleveland Museum of Art on school trips. I was hoping I could sneak behind the class and they’d forget about me and I could be there all day. Art meant a lot to me from the get-go, especially the Egyptian rooms.

Why didn’t you stay with visual art?

I found I couldn’t draw for one reason or another and that was the end of my art career. Before I knew it, I was onstage.

It’s sort of like the stage — quick moments of a life that are gone the minute you take your eyes away and the curtain comes down.

A passion for flowers has always been with me. I’ve loved all Mapplethorpe’s work and O’Keeffe’s. I started this flower project four years ago, and I threw out half of them; they weren’t abstract or painterly enough. They were too literal.

Are you drawn to any flowers in particular?

I got very crazy with orchids. All of a sudden I started to say, ‘What’s inside?’ I thought maybe the book would be called, “Petals, Pistils, and Stamens, Oh My.”

Where do you get them?

I go to 28th Street [a wholesale flower market] after the gym and they know me in a certain place where I go every week. I walk among them.

Can you imagine making art your career?

I’m still learning and I feel like a neophyte always.

How do you know Ron Kitaj?

We were classmates in Cleveland at Doan Elementary School. Ronnie and I have pictures of the two of us in short pants. I met Hockney through him and Jim. Duane Michals is also a close friend. He photographed me in “Cabaret” for Glamour. That’s how long I’ve known him.

Why are you drawn to artists as friends?

Whatever it takes to make art, to imagine, to dream are similar to me. As a director, the dreams are everything.

Do you go to museums and galleries?

I go to the Met to wander and to be inspired all the time. I don’t even know where I’m going to go, because it’s endless.

What do you think about what the art market has become?

Nutty. I don’t think about that. I think about what’s fresh, beautiful, touching and surprising. That’s what I like: surprise.