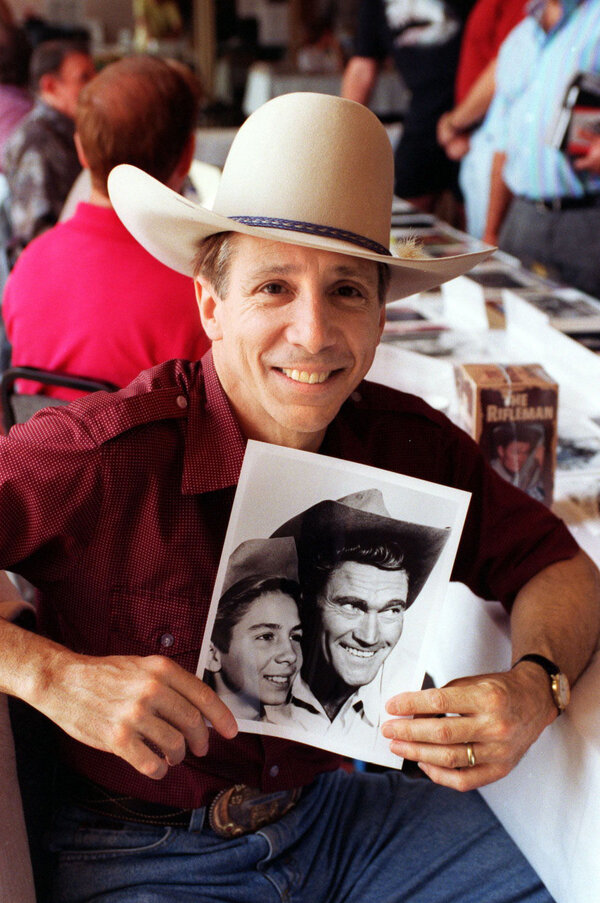 Johnny Crawford, the soulful young actor who became a child star on the western “The Rifleman” in the late 1950s and had some success as a pop singer, died on April 29 in Los Angeles. He was 75.

The death, at an assisted-living home, was announced on the website johnnycrawfordlegacy.com by his wife, Charlotte McKenna-Crawford. It was revealed in 2019 that he had Alzheimer’s disease, and he had been in failing health since his hospitalization last year with Covid-19 and pneumonia.

“The Rifleman,” which ran from 1958 to 1963, was a low-key half-hour series on ABC about Luke McCain (Chuck Connors), a widowed Civil War veteran and sharpshooter raising his son on their ranch in the New Mexico territory. The boy, Mark, was always identifiable by his Stetson hat and always had an intense expression — usually one of earnest concern or unabashed hero worship. When he asked his father why people are cruel to others who look or dress differently from them, his father explained simply: It’s fear.

John Ernest Crawford was born on March 26, 1946, in Los Angeles, the son of Robert Lawrence Crawford Sr., a film editor, and Betty (Megerlin) Crawford, a concert pianist. His maternal grandfather was Alfred Eugene Megerlin, the Belgian violinist who became concertmaster of the New York Philharmonic and the Los Angeles Philharmonic.

On Emmy Awards night in 1959, three contemporary Crawfords were nominees: Johnny, 13, for “The Rifleman”; his older brother, Robert Jr., for a role as a child in wartime Europe on “Playhouse 90”; and their father for editing the comedy series “The Bob Cummings Show.”

Decades later, Mr. Crawford liked to tell interviewers that he was “a has-been at 9.”

He’d been on television twice — singing on “The Pinky Lee Show” and “The Steve Allen Show” — when he was hired in 1955 as one of the original 24 Mouseketeers on Walt Disney’s “The Mickey Mouse Club.” The Mouseketeers, perky children in matching white mock-turtle short-sleeve shirts, sang, danced, appeared in serials like “Spin and Marty” and opened and closed the show with a paean to M-i-c-k-e-y M-o-u-s-e. But after one season, producers decided to feature only 12 Mouseketeers, and Johnny was cut.

Johnny was 17 and receiving piles of fan mail when the series ended. He became something of a teenage pop-music idol as well, with four Top 40 hits. The most successful, “Cindy’s Birthday,” reached No. 8 on the Billboard pop singles chart in 1962.

Between the 1960s and the ’80s Mr. Crawford made more than a half-dozen feature films, including the western “El Dorado” (1966), starring John Wayne, and appeared in other television westerns. He spent two years in the Army, appeared at rodeos (the “Rifleman” crew had taught him rope tricks) and began doing live theater across the country.

“I think I’m most happy when I’m doing a play somewhere and having the opportunity of doing the same play over and over again and getting to really develop the character,” he told TV Collector magazine in 1982, after he had finished a run in “I Love My Wife” in Canada.

But he found an even more satisfying career later in life. He had loved early-20th-century popular music since childhood and was reminded of that when his friend Hugh Hefner — who had been an executive producer of “The Naked Ape,” a 1973 film starring Mr. Crawford and Victoria Principal — played a Bing Crosby album for him.

In 1992 he formed the Johnny Crawford Dance Orchestra. Sometimes wearing top hat and tails, he conducted the band and sang, period style in a high baritone, hits of the 1920s and ’30s like “After You’re Gone” and “Happy Feet.”

Mr. Crawford and Charlotte Samco McKenna, who were high school sweethearts in the 1960s, reconnected years later and married in 1995. In addition to his wife, his survivors include his brother Robert; a sister, Nance Crawford; and two stepdaughters, Brenda Westenhaver and Jamie Pierce.

Mr. Crawford’s final screen appearance was in “Bill Tilghman and the Outlaws” (2019), also known as “The Marshal.” But, as he told The Wall Street Journal in 2000, he considered his orchestra “the best acting assignment” he’d ever had.

“These songs have wonderful dialogue,” he said. “It’s like getting to do Shakespeare.”