In a damning Rolling Stone report, the magazine spoke with employees who claim the sportswear company, which had a lucrative partnership with Yeezy, was well aware of Kanye’s ongoing “problematic behavior.” They believe Adidas “turned their moral compass off” and ignored the rapper’s abusive and “toxic” behavior, per a letter written by Yeezy staffers to Adidas executives and titled, “The Truth About Yeezy: A Call to Action for Adidas Leadership.”

The atmosphere around the office was “Kanye is just Kanye,” which is just a different version of “boys will be boys” — and it is horrifically damaging, especially to the women, who were often targets of his harassment. His breach of trust with Kim occurred while they were married and during a job interview with a potential Yeezy candidate.

Employees recall that Kanye was showing “very revealing and personal” photos and videos of the SKIMS founder on more than one occasion. Rolling Stone revealed countless instances where Adidas let Kanye run wild at the expense of their employees’ mental health. Adidas gave the magazine a statement that doesn’t seem to address how severe his actions were. They only noted that they were “working through the details of the termination” and “want to keep [their] employees’ talent and skills within the organization.” It sounds like their actions were too little, too late.

Before you go, click here to see celebrity exes who never buried the hatchet. 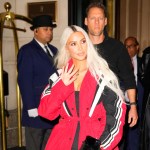 Kim Kardashian Says Nothing is Better Than Bedtime ‘Snuggles’ — & We Agree