The royals’ account shared a video message with four pictures alongside the caption, “Wishing fathers everywhere a happy Father’s Day.”

The royal holds little Louis, while George hugs his father’s leg and Charlotte gives the camera a sweet smile. The photo is from 2019’s Trooping the Colour celebration. 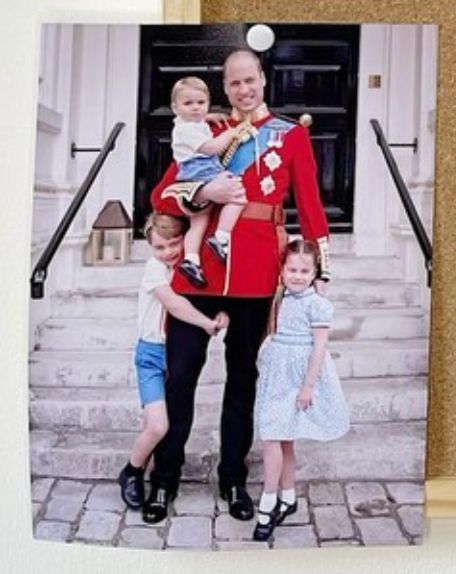 The other photos in the post show Prince Charles lying on the grass with a young Prince Harry and William; the Duchess of Cambridge with her father, George Middleton, as he walked her down the aisle at the royal wedding in 2011, and the late Prince Philip surrounded by his grandchildren.

The photo with Philip, which was taken at Balmoral in 2018, was only recently shared by the royal family in a tribute after the Duke of Edinburgh died in April.

A post shared by Duke and Duchess of Cambridge (@dukeandduchessofcambridge)

Princess Eugenie also gave royal fans a sneak peek of her home life with her baby son, thanks to a heartwarming post dedicated to her husband, Jack Brooksbank, for his first Father’s Day.

The pictures show a grinning Jack walking with the couple’s son, August, in a stroller, him cuddling with his sleeping son on the couch and the family of three posing together. August Philip Hawke Brooksbank was born Feb. 9 at The Portland Hospital in London.

“Happy Father’s Day to you my love,” the royal wrote in the caption of the social media post on Sunday. “You are the ultimate father to our boy!!”

Social media accounts for Prince Charles and Camilla, Duchess of Cornwall, as well as the Royal Family’s official account (which represents Queen Elizabeth and other members of the family), also shared tributes for Father’s Day:

Though Meghan Markle and Prince Harry do not have or use social media accounts at the moment, the Duchess of Sussex spoke about her husband and their son, Archie, in a segment for NPR that aired on Father’s Day.

Meghan gave her first ― and only ― interview to NPR about her new children’s book, “The Bench,” which was inspired by a Father’s Day gift and poem she gave to the duke before his first time celebrating the holiday. The interview, which was pre-taped before the birth of the couple’s daughter, Lili, is Meghan’s first since speaking with Oprah Winfrey for a bombshell special earlier this year.

“As most of us do, you go, what am I going to get them as a gift?” Meghan told NPR’s Samantha Balaban for Weekend Edition’s children’s book series. “And I thought I just wanted something sentimental and a place for him to have as a bit of a home base with our son.”

The duchess ended up giving Harry a bench, along with a plaque that read “This is your bench/Where life will begin/For you and our son/Our baby, our kin.”