Martin Charnin, the Broadway lyricist and director who conceived of turning the comic strip “Little Orphan Annie” into “Annie,” the hit musical whose title character vowed that “the sun’ll come out tomorrow,” died on Saturday in a hospital in White Plains. He was 84.

His daughter, Sasha Charnin Morrison, said the cause was a heart attack.

The story of a young girl in a Depression-era orphanage adopted by the millionaire Daddy Warbucks, “Annie” was by far the most successful venture of Mr. Charnin’s career, opening in April 1977 and running for 2,377 performances — almost six years.

“Annie” went on to win seven Tony Awards in all, including for best musical, best score and best book. Dorothy Loudon, who played Miss Hannigan, the villainous child-hating matron of the orphanage, won for best actress.

The show also spawned two Broadway revivals, two stage sequels (neither of which made it to Broadway) and two films. Mr. Charnin, who was nominated for a Tony for his direction, directed 42 touring productions of the original musical.

“I’ve spent 23 years of my life with Annie,” he told the talk show host Charlie Rose in 1993 before the second sequel, “Annie Warbucks,” opened Off Broadway. “Like all daughters, she’s taken care of me in my old age.”

Mr. Charnin’s dedication to “Annie” began in 1972, when he became excited at the musical comedy possibilities in “Little Orphan Annie,” the long-running comic strip created by Harold Gray in the 1920s. But when he approached his eventual collaborators, the composer Charles Strouse and the writer Thomas Meehan, they were not interested.

“I hated it because I had done a show called ‘It’s a Bird … It’s a Plane … It’s Superman,’ and it closed in four months,” Mr. Strouse, who also wrote the music for “Bye Bye Birdie,” told Playbill in 2009.

For his part, Mr. Meehan insisted that he did not want to write the book for a musical that he would not want to see.

But Mr. Charnin’s pitch swayed them, and Annie — the indomitable, optimistic, redheaded girl whose anthem, “Tomorrow,” would become the show’s signature song — was on her way to the stage, with Andrea McArdle in the title role. (She was also nominated for a Tony.) 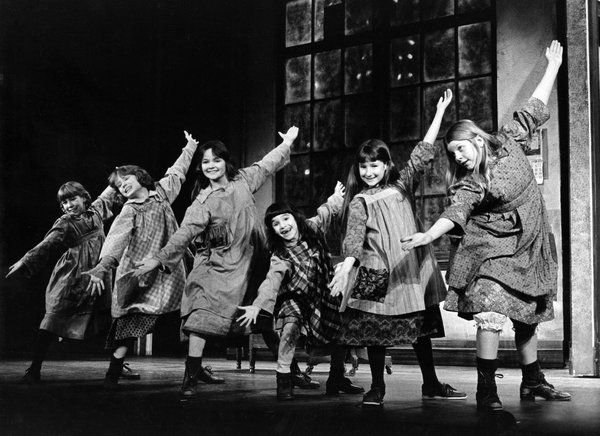 “Notice we don’t call our show ‘Little Orphan Annie,’ ” Mr. Charnin told The New York Times shortly before its Broadway opening. “We call it ‘Annie.’ We want to distinguish between Gray’s view and ours.”

He added that no words from the comic strip appeared in the musical.

Martin Jay Charnin was born on Nov. 24, 1934, in Manhattan to William and Birdie (Blakeman) Charnin. He grew up in the Washington Heights neighborhood. His father sang in the chorus of the Metropolitan Opera, and his mother was a secretary and homemaker.

After attending the High School of Music and Art in Manhattan (now the Fiorello H. LaGuardia High School of Music & Art and Performing Arts), he enrolled in the Cooper Union, where he studied painting. But after his second year there his focus shifted when he went to work for a summer theater in the Adirondacks, acting, writing sketches for a revue and painting scenery.

“I’d never acted in my life, but I started to act and sing,” he said in an interview in 1993 for the American Jewish Committee’s oral history of Jews in the theater. “I didn’t even know that I had a voice, but they had auditions and I opened my mouth. I had sensational pitch and projection.”

He returned to college, graduated with a bachelor of fine arts degree and set out to find acting work. He answered an audition call in 1957 for actors to play juvenile delinquents in a Broadway musical initially called “Gangway” but later renamed “West Side Story.” With slicked-back hair and jeans, Mr. Charnin joined thousands of others lined up outside the theater.

After a long day of auditions, he was hired to play Big Deal, a member of the Jets, who in the show face off against the Sharks, a rival gang.

Mr. Charnin played the role about 1,000 times through 1960 — but, he later recalled, he knew within two weeks of the musical’s opening that he did not want to stay an actor. Being in the company of its creators — the composer Leonard Bernstein, the lyricist Stephen Sondheim and the director and choreographer Jerome Robbins — had inspired him to move behind the scenes.

“I wanted desperately to be in a power position,” he said in the oral history.

By 1963 he had written the lyrics to his first musical, “Hot Spot,” with the composer Mary Rodgers. (It had a brief Broadway run.) He then collaborated with her father, Richard Rodgers (whose celebrated previous lyricists had been Lorenz Hart and Oscar Hammerstein II) on “Two by Two,” a musical about Noah’s ark starring Danny Kaye. It opened in 1970 and ran for 350 performances.

“As far as I was concerned, Noah was my father,” Mr. Charnin said in an interview in 1970 with The Daily News. “Stubborn, intractable, proud, warm and vulnerable.”

In 1973, he directed the short-lived “Nash at Nine,” a musical revue based on the light verse of Ogden Nash.

By then he had moved into television. He won an Emmy Award for producing “Annie, the Women in the Life” (1970), a musical special starring the actress Anne Bancroft, and two more as the producer and co-director of “ ’S Wonderful, ’S Marvelous, ’S Gershwin” (1972), a tribute to the songs of George and Ira Gershwin.

“Annie” was Mr. Charnin’s next big project. For much of its gestation at the Goodspeed Opera House in East Haddam, Conn., it opened with the song “It’s the Hard-Knock Life,” featuring Annie and the other orphans, followed by a ballad, “Maybe,” sung by Annie.

But, as Mr. Charnin recalled, he and Mr. Strouse later flipped the order of the songs, to let “Maybe” immediately establish Annie’s desire to become part of a family. She sings:

So, maybe now this prayer’s

The last one of its kind.

Won’t you please, come get your baby?

Mr. Charnin reunited with Richard Rodgers for the musical “I Remember Mama” in 1979; directed and wrote the lyrics to “The First” (1981), a musical about Jackie Robinson, with music by Bob Brush; and directed a comedy revue starring Sid Caesar, which closed after five performances in 1989.

The next year, Mr. Charnin, Mr. Strouse and Mr. Meehan collaborated again on “Annie 2: Miss Hannigan’s Revenge,” which opened at the Kennedy Center in Washington and quickly closed after dismal reviews. Four years later they teamed up for “Annie Warbucks,” about the search for a wife for Daddy Warbucks that would give Annie two parents.

As the second sequel, “Annie Warbucks,” staged at the Variety Arts Theater in the East Village in Manhattan, represented a course correction from the poorly received “Annie 2.”

“We told it from the point of view of the evil Miss Hannigan, and it was the wrong way to do it,” Mr. Charnin told Mr. Rose.

He returned regularly to direct the original “Annie,” most recently on a national tour from 2014 to 2015.

Before his death, he had been working on a revue featuring songs by famous composers about New York City; it was to open in December at the Triad Theater on the Upper West Side. But it will not go on without him.

“I had met with Martin a few times,” Peter Martin, the theater’s owner, said in an email, “and we were scheduled to meet again this past Monday to go over budgets. But Martin was at the doctor’s office and not feeling well.”

In addition to his daughter, Mr. Charnin is survived by his wife, Shelly Burch Charnin, a singer and actress; a son, Randy; a stepdaughter, Dayna Bennett; two stepsons, Richard and Joel Bennett; three grandchildren; and his sister, Rena Mueller. His marriages to Lynn Ross, Genii Prior and Jade Hobson ended in divorce.

Mr. Charnin had no regrets that “Annie” was a far greater success than anything else he had done on Broadway.

“He was never looking for commercial success,” Ms. Charnin Morrison said in a phone interview. “He looked at it for how much he absolutely loved the business. He loved being in it — it was in his bloodstream.”