In the past, the writer and critic Antwaun Sargent was often thwarted in his ideas for gallery exhibitions, told they were too costly or ambitious.

Then he became a director at Gagosian.

Sargent can dream big now, which he has with his first show, “Social Works,” opening Thursday at the gallery’s West 24th Street location in Manhattan. The exhibition he has curated features the work — most of it created over the last challenging year — of 12 Black artists, all of whom are actively engaged with their communities through efforts like food banks, mentorship and neighborhood revitalization.

“The whole thing is about art as a social act,” said Sargent, 32, in a recent interview at the gallery. “Given the last year of the pandemic and protest and the history in which Black artists operate, the work does more than just sit quietly on the wall. It really is about the social implications of what it means to be Black in this world and to move through this world and move through space and take space and create space and reimagine space.” 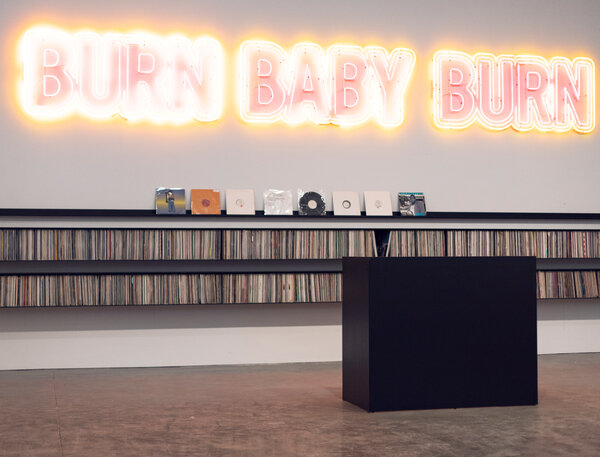 With the formidable funding and square footage of Gagosian to work with, Sargent was able to say yes to artists’ outsized ideas — like an operational urban farm by Linda Goode Bryant, where vegetables will be harvested in the gallery, mounted on the walls and available free to visitors; an immense spiral made of crushed New York City limestone by the architect David Adjaye, his first large-scale sculpture; and an installation featuring five female fellows from the New Haven art center NXTHVN, co-founded by Titus Kaphar, one of only two artists in the show who are represented by Gagosian (the other is Theaster Gates).

“Total freedom,” said Sargent, in describing how much leeway he had in developing the show. “Gagosian has phenomenal resources. I wanted to use those resources to do shows like this.”

Hired in January, Sargent, the author of “The New Black Vanguard: Photography Between Art and Fashion,” said he realizes that he is riding a moment of reckoning in which galleries and museums are facing up to their history of excluding artists, curators and executives of color.

And some in the art world worry that the current enthusiasm for buying Black artists, showing Black art and hiring Black staff members will be superficial and short-lived.

But Larry Gagosian said he is committed to “a long overdue realignment of the art world.”

“As I move on in my career, it occurs to me that I may not see things as well as I saw things 20 or 30 years ago,” he added. “With somebody like Antwaun, I’m able to refresh my perspective.”

Sargent said he feels as if the gallery has welcomed his input and wants him to succeed. “I don’t feel like I’m in a sink-or-swim environment,” he said. “I feel like I’m being supported.”

The artists in the show say they see Sargent’s hiring and his first show as an encouraging sign, though its staying power remains to be seen. “What’s making the change now is supply and demand,” said Bryant, who struggled in 1974 to get real estate brokers to rent a space to her when she wanted to show Black artists in her own gallery, Just Above Midtown, known as JAM.

“The question is, is it a fundamental change in the way we perceive one another, in the way we establish hierarchies and divisions?” she asked of Gagosian’s efforts. “I think it’s way too early to say, ‘yes.’”

The “Social Works” exhibition features the work of artists who are engaging with their communities in concrete ways. The Los Angeles artist Lauren Halsey, for example, last summer started Summaeverythang, which brings organic fruits and vegetables to some of that city’s underserved neighborhoods.

Her installation at Gagosian looks at South Los Angeles through its signage to show the way a community “inscribes itself on the physical landscape,” Sargent said, “making sure we understand the value of that language.” Halsey’s colorful paintings on wooden boxes refer to how big box retailers displace local merchants, Sargent added, the way gentrification “often removes a community’s contributions.”

Rick Lowe, who in 1993 founded Project Row Houses, a nonprofit organization in Houston, offers a new series of paintings that memorialize the 1921 Tulsa Race Massacre in Oklahoma.

Carrie Mae Weems, who runs the community organization Social Studies 101, has work in the show drawn from her 2006 “Roaming” and “Museum” series of photographic self-portraits in which she stands amid monuments and institutions.

Gates, who is working to revitalize Chicago’s South Side, has an installation dedicated to the D.J. Frankie Knuckles, the “godfather of House Music” who died in 2014. The work features more than 5,000 records from Knuckles’s personal archive — many of which will be digitized as they play in the gallery — and a neon sign of the phrase, “Burn, baby, burn,” which was used by Watts rioters after being popularized by disc jockeys.

Adjaye, who designed the Smithsonian’s National Museum of African American History and Culture and the Studio Museum in Harlem’s new building, now under construction, has used New York earth to create a curvilinear maze that references West African architecture and feels like a rough-hewed Richard Serra.

Adjaye said in an email that he was “exploring Black spaces on the continent in relation to social gathering spaces.” The sculpture invites people to move through it, echoing Adjaye’s emphasis on architecture that is inclusive and accessible.

“It’s about fragments of chambers and of buildings constructed from the earth,” he said, “that were the backdrop to the life of Black people.”

Sargent, looking stylish the other day in a cream-colored straw hat and Adidas Wales Bonner Samba Shoes (long tongue and topstitching), doesn’t necessarily qualify as a disrupter, since he’s been part of the art world for a decade. (The works, like most of those at the gallery, are for sale; prices upon request.)

But he does want to expand the ways people can experience art beyond the purely aesthetic, attracting visitors who would typically come to the gallery “to enjoy a [Gerhard] Richter show” as well as those who might be more interested in how art can be “in service of my community.”

“As we try to rethink institutional space, we should all be working together in trying to imagine something else,” Sargent said, “pushing at what else might be possible if we dream just a little beyond tradition.”

Allana Clarke, a Trinidanian-American who works with Black beauty products, has two pieces in the show — one a poem cast from raw unprocessed cocoa butter and beeswax that spells both “black” and “lack”; another a sculpture made out of the bonding glue used for hair extension weaves.

She said that “Social Works” goes further than the “virtue signaling and empty gestures” coming from many institutions over the last year. “This is not that,” she said. “This is a really complex view of Blackness.”

“Hopefully, this is the beginning of something that is impactful and long lasting,” she added. “It’s completely overdue.”