Among the current crop of summer shows devoted to painting, “Painters Reply: Experimental Painting in the 1970s and Now” is a standout. Taking its name and conceit from a 1975 special issue of Artforum magazine, in which artists responded to a questionnaire about the state of the medium, the show, at Lisson Gallery, suggests the rich range of possibilities in which past and present experimental painting practices merge.

Joe Overstreet’s 1972 unstretched, untitled canvas unfurls from the wall in a similar fashion to Eric N. Mack’s “Pelle Pelle” (2017), which is made with a microfiber blanket, polyester fabric and silk curtains tacked to the wall. Paintings and assemblages from the ’70s based on the grid by Joan Snyder, Howardena Pindell, Sean Scully and Al Loving sit comfortably next to more recent riffs on geometry by Sadie Benning, Matt Connors and Dona Nelson.

Lynda Benglis’s poured polyurethane from the late ’60s is here, and there are notable paintings by Stanley Whitney and Ron Gorchov from the ’70s; a divine Dorothea Rockburne from the ’80s; a post-punk black and white canvas by Steven Parrino from the ’90s; and a printed-fabric painting by Ruth Root from last year. The point of the conversation becomes clear: Painting came off the wall in the 20th century, became non-rectilinear, and not even reliant on paint. As a result, a simple way of pigeonholing painting became impossible. What’s “old” can look “new,” and vice versa. What’s important is that it offers a credible reply to the open-ended question of “what is?” or “why more?” painting. MARTHA SCHWENDENER 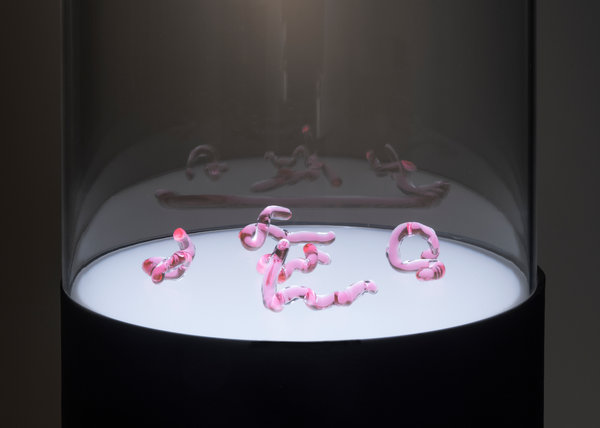 Heather Dewey-Hagborg has a gift for blending art and science in thrilling and terrifying ways. Her solo show “At the Temperature of My Body” continues her investigation into the uses and ethics of biotechnology with three new projects, two involving experiments and research. For “Lovesick” (2019), Ms. Dewey-Hagborg worked with scientists at the company Integral Molecular to create a “love virus” that boosts the production of oxytocin, a hormone associated with social bonding. Samples of the virus glow in wormy glass vials, looking benign but paranormal.

“Spirit Molecule” (2018—19), a collaboration with Phillip Andrew Lewis, is an attempt to engineer the DNA of lost loved ones into psychoactive plants, so that they could be consumed as an act of memorialization. Plants grow in the gallery near a tender, personal video that humanizes the outré-sounding project.

“T3511” (2018), made with Toshiaki Ozawa, is an experimental documentary that registers as dystopian fiction. The video follows a woman, played by the artist, who buys saliva online and becomes obsessed with the anonymous donor, analyzing his biological data and tracking him down.

While Ms. Dewey-Hagborg’s research projects have a radical utopian bent, “T3511” emphasizes the creepiness lurking within them. Her work suggests mind-bending possibilities for biotechnology, without ever losing sight of its dangers and abuses. JILLIAN STEINHAUER

God may be dead, but he left behind his miracles. At least, that’s my takeaway from “Muscle Memory,” David Kennedy Cutler’s suite of brilliant new paintings at Derek Eller Gallery. Each is essentially a brightly colored display box of empty space: The Brooklyn-based artist prints a photo or scan of body parts, clothing or fruit onto two pieces of canvas, sometimes adding some clear acrylic medium to imitate the texture of paint. Then he mounts the first piece on the front of an ordinary stretcher, like any other painting, and the second on the back, and slices open the first to reveal the second.

In “Climbing Out (Right),” scans of Mr. Cutler’s wife’s feet flop down like lurid flower petals, and it’s easy to identify the foot-shaped holes they’re falling out of. But more often the riotous color makes it hard to draw this visual connection, so that the potatoes, banana peels and money-green leaves of kale seem to burst forth ex nihilo. It’s the first work I’ve seen in ages that treats the illusions of art with such frank delight. But there’s also a larger point: As the heart-shaped pears in “Red Anjou” remind us, the best magic trick is still the human body. WILL HEINRICH

For Allan Sekula (1951—2013), photography was an apparatus to map the extraordinary sprawl of the global economy — a dark, turbid domain as wide and agitated as the oceans to which he so often turned his lens. This Los Angeles artist’s photographs of workers and protesters, ports and ships, have appeared in two editions of Documenta, the once-every-five-years German mega-show, and are in the collections of several museums. Yet this show at Goodman, titled “Labor’s Persistence,” is the first substantial outing of these photographs on the East Coast.

Sekula worked in series, and this show intermingles the early, black-and-white “Untitled Slide Sequence” (1972) — more than two dozen pictures of workers in suits or uniforms leaving an aerospace factory after a day’s work — with the monumental, color-rich “Fish Story” (1989-95), whose focus on container ships makes it one of the first major artworks of the globalization era.

Less compelling are the slurred images in the slide show “Waiting for Tear Gas (white globe to black),” shot amid the 1999 Seattle protests against the World Trade Organization: a young woman disguised by a bandanna, an older one nursing a black eye, rainy streets, police on horseback. Their anarchistic romance now feels like ancient history, a sensation compounded by the chi-chunk-chi-chunk of the superannuated slide projector. Sekula was always best when he interwove documentary and poetic modes, as in the diptychs of “Dead Letter Office” (1996-97), which interlace California and Mexico; a shipyard welder and Navy divers share space, strange to say, with the huge Mexican water tank in which James Cameron shot “Titanic.” JASON FARAGO 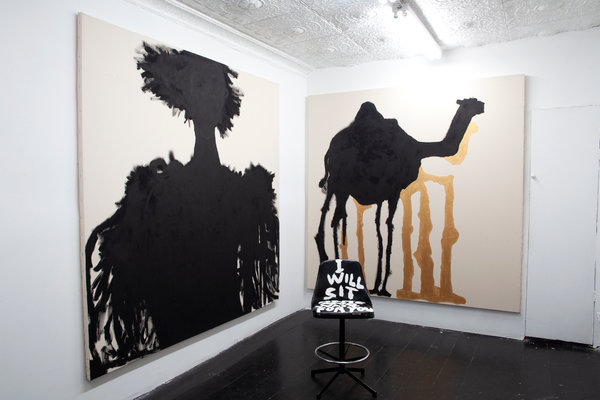