MANCHESTER, England — “This is our help,” Trajal Harrell said, introducing each of the 10 dancers in his ensemble at the start of his new “Maggie the Cat” at the Manchester International Festival, now in full swing here.

The statement wasn’t a casual one. “Maggie the Cat,” a Manchester commission, is inspired by Tennessee Williams’s “Cat on a Hot Tin Roof” (1955), that hot-blooded Southern drama of family mendacity centered on the determined, vital Maggie. But Mr. Harrell’s account doesn’t offer the narrative of the play, or specifically evoke its main characters.

Instead, the servants, nearly invisible in Williams’s work, claim center stage, getting a flamboyant, sashaying, vogueing turn in the spotlight, where they glitter like newly minted stars.

Dance has never been a particular focus at the Manchester festival, dedicated to producing new work since it was founded in 2007. Its first director, Alex Poots, emphasized imaginative, often unlikely, high-octane collaborations that fell mostly in the domain of theater, music and visual art. John McGrath, who took over in 2015 when Mr. Poots left to run the Shed in New York, has continued in a similar vein. Dance, though, has played a stronger role this year, as an important component in two flagship shows (“Tree” and “Invisible Cities”), and in commissions from Mr. Harrell, FlexN & Young Identity and the Scottish choreographer Claire Cunningham.

Mr. Harrell, an American choreographer whose work has been embraced in Europe, has long been interested in how identity — sexual, racial, gender — is performed, how choices of clothing, attitude and presentation are constructs in life and onstage.

In “Maggie,” as in his 2018 “Caen Amour,” heaps of dress-up materials are arrayed on tables and stands at the back of the stage. One by one, the dancers select pieces, holding them across their bodies as they proceed through slanted-body catwalk marches, teetering high on imaginary heels. (Perhaps they are all Maggie; perhaps they just want to be Maggie, who has moved from poverty to wealth.)

At first the idea seems limited. But the repetitive, ritualized walks soon focus attention on difference as the performers — fabulously diverse in every way — offer individual kinetic embellishments on the stylized, affectless runway walk. 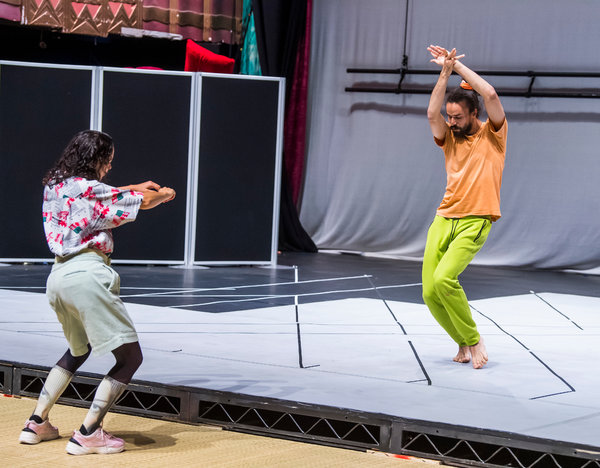 In a relentless, inventive procession, set to a variety of rhythms and musical moods (the soundtrack mix, credited to Mr. Harrell, includes Bruce Springsteen’s “State Trooper” and pieces from Campdogzz, Mulatu Astatke and Julio Iglesias), the dancers wear different household items — towels, duvets, pillows, sofa cushions, aprons, dresses — in a hilarious profusion of ways and with ever-changing attitude. In turn, they offer us different modes of being: neutral, angry, shy, indifferent, teasing, flirtatious.

Mr. Harrell, who early on tells us he is Big Mama, remains mostly at the front and sides of the stage with Perle Palombe (Big Daddy), occasionally rapping and singing, offering riffs on the word “Maggie” and on her doings. Late in the work, Mr. Harrell places a cardboard box near the front of the stage. One by one, the dancers step into it on the balls of their feet, then walk away, leaving soft smears of brown paint on the white surface. Perhaps it’s an allusion to blackface (the program notes refer to “brownfeeting”), but the gesture is made with such delicacy that it registers primarily as a moment of joy and playfulness, of the pleasure of making your mark.

In many ways, “Maggie the Cat” recalls the work of Pina Bausch: the stylized dress-up; the knowing, yet unironic complicity with the audience; the pleasure of entertaining; the transformed rites of daily life. (A sequence in which cushions are strapped to three performers, who become beds or chairs for others to recline upon, is particularly Bausch-like in its transformation of absurdity into metaphor.)

The straightforward ideas that animate “Maggie” — the catwalk procession, the exuberant self-expression, the transformation of ordinary household objects — are handled by Mr. Harrell with masterly timing and aesthetic flair. Through rhythmic juxtaposition and perfect pacing, he creates alternating states of chaos and calm, of joy and excitement, bewilderment and bathos. And he keeps it tight at 50 minutes, ending with an impeccably choreographed series of bows as each performer passes a little black dress from one to the other. They are all Maggie, and they are all superb.

The dancers are terrific, too, in “Tree,” the drama of South African homecoming by Idris Elba and Kwame Kwei-Armah. The choreography, by Gregory Maqoma, is finely conceived, adding mystery, drama and urgency to the tale as he fuses the low center of gravity and fluid upper body work of much African dance with a more contemporary sensibility.

And Sidi Larbi Cherkaoui’s choreography for “Invisible Cities” was much the most interesting component of this impressively staged, self-consciously grand work based on the Italo Calvino novel. With his trademark fluid, body-morphing style, Mr. Cherkaoui turns the dancers (from the British company Rambert) into physical evocations of imaginary cities — a caravan of camels, multiheaded monsters, walls and trees, a mobile incarnation of both architecture and peoples.

But the central dance event of the festival was certainly “Maggie the Cat,” one section of a trilogy that will be presented in Manchester next year. The program tells us that Medea and the choreographer Katherine Dunham are the subjects of the other parts. What will Mr. Harrell do with them? 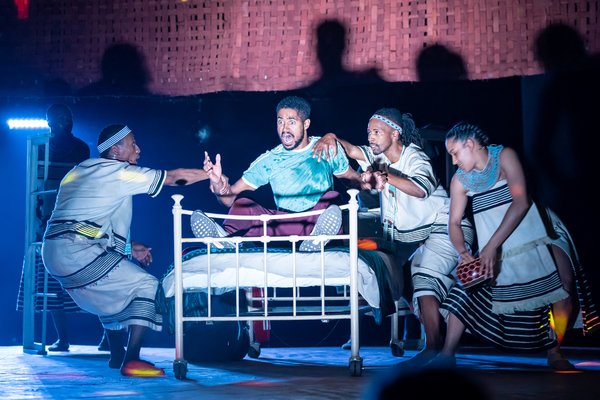 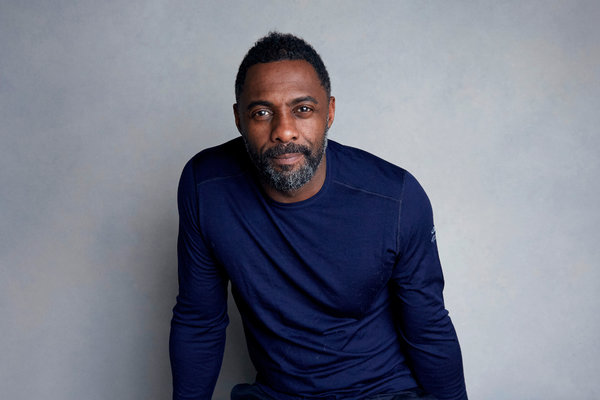