This jaw-dropping, sometimes heart-rending show — a larger version of which was seen at a photography festival in Arles, France, last summer — is a cornucopia of established and unfamiliar names, from the celebrated Henry Darger to the all-but-unknown Ichiwo Sugino; improvised mediums and often painful stories of isolated lives.

It is also the first large survey to examine what it has named Photo Brut, the various forms of photography practiced by artists referred to as self-taught or outsider in the United States, and as Art Brut, or raw art, in Europe. They didn’t and don’t always call what they are doing art. Much like their mainstream counterparts, they have come to use the camera and photographs for collage, assemblage, appropriation, staged photography and the like.

The works here are drawn primarily from the extensive collection of Bruno Decharme, a French film director, whose non-photographic holdings were shown at this museum in 2001. It was organized by Decharme and Valérie Rousseau, senior curator at the Folk Art Museum, and gives further prominence to the useful phrase Photo Brut — rawness is something of a byword in the work here — and seems bound for wider usage. 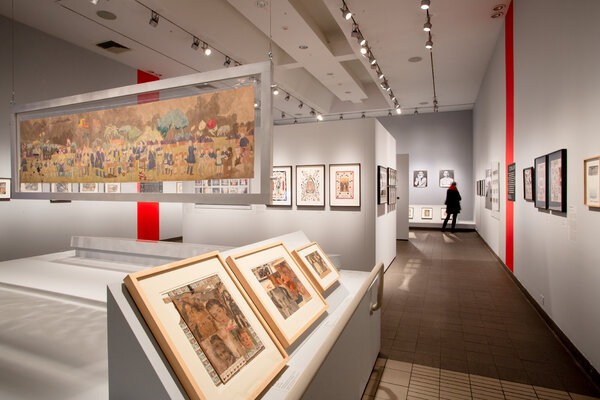 The show is 13 artists smaller than in Arles, but its proportions remain epic. It contains over 400 works by more than 40 artists who were born between 1891 and 1992, about one third of whom are still alive. Several artists are well known, but I’ll be concentrating on those new to me.

The curators have divided the work into four loose, overlapping groups: Private Affairs, Performing, Reformatting the World and Conjuring the Real. The section titles make increasing sense the more you engage. But you are also left to connect the dots yourself.

The show as a whole presented an installation challenge that has been mostly met, but a lot of the images are small and recessive. The trick is to look at the work, read the artist’s short biography and look again, allowing the two to briefly form a little world. Here are several that I visited.

A great spur to the invention or at least the constant improvement of photography revolved around sex and the ability to see people naked. No surprise that this section is shot through with intimations of both, and this exhibition is overwhelmingly male. The big names here are Eugene von Bruenchenhein (1910-1983), known for photographing his beautiful, strikingly innocent-looking if scantly clad wife; and Morton Bartlett (1909-1992), who photographed exquisite girl-dolls that he made himself. Another is the great Czech artist Miroslav Tichy (1926-2011), who secretly photographed women unwinding in parks or on beaches with crude cameras of his own making, creating images that grant them a modicum of privacy.

Steve Ashby (1904-1980) gave cutout images of faces and figures solidity by gluing them to wood and mounting them on sticks, as with a smiling, embracing couple. Elsewhere the more natural forms prevail. In an especially impressive piece, a woman has curving branches for arms, and seems to erupt out of a large burl, like a goddess.

Cindy Sherman made dressing up for the camera one of the most persistent and useful staples of contemporary art. So it makes sense that the Performing section feels relatively up to date.

The staged photographs of Marcel Bascoulard (1913-1978) show this slight, older man in women’s clothes, posed in his French village. Taken by the villagers who also cared for him, they seem like decrepit documents of another time: The images are often sepia-toned and the dresses long and redolent of the 19th-century. His unchanging expression is ineffably poignant — at once adamant and forlorn, male and female. Tragic figures like Madame Bovary and Anna Karenina come to mind, but so do William Wegman’s Weimaraners. It is easy to walk past these images, but I advise against it.

Sherman’s work is especially summoned by the photographs of Tomasz Machcinski (born 1942), in which he uses makeup, clothes and props to transform himself into historical figures including Maxim Gorky, Gloria Swanson and Mother Teresa. But as with an actor, it is the changes in Machcinski’s expression and posture that make his characterizations real.

The distinction between outside and inside or Brut and non-Brut all but disappears with Lubos Plny (born 1961). His body art can be linked to the Vienna Actionists. And the link may be real since he spent over a decade working as a model at the Academy of Fine Arts in Prague in the 1990s. But Plny’s work feels visionary. His large collage drawing surrounds images cut from anatomy books with whirling dervish-like lines. The 2003 piece, which consists of 10 large photographs, documents the artist sewing his right hand to his face in an act of deadpan martyrdom.

One of the show’s stars is Ichiwo Sugino (born 1965), a retired advertising designer whose efforts may point to the future of camerawork: the vast outsider realm of online. In 2015 Sugino began posting impersonations of mostly 20th-century cultural figures — all male — on his Instagram account. He achieves these likenesses mainly by altering his face with adhesive tape and other props as needed. His subjects include Alfred Hitchcock, John Lennon, Marlon Brando as the Godfather and Che Guevara. Their faces scroll past on what looks like a giant cellphone screen, making it easy to contrast the images’ startling accuracy with their ingeniously slapdash method. This may be Online Brut, as well as a spoof of the fastidious transformations, also for the camera, of his fellow Japanese artist, Yasumasa Morimura.

A more direct, if longer name, for this section might have been “Doing Things With Images That Already Exist.” The great exemplar here is Henry Darger (1892-1973), the Chicago janitor who wrote and illustrated an elaborate and grandiose novel centering on the alternately dangerous and pastoral existence of the androgynous Vivian Girls. Like some insider artists, Darger had images from newspaper ads and coloring books photocopied, enlarged and sometimes flipped. This display may appeal to most Darger fans, but it amplifies the complexity of his achievement.

Several other artists manipulate photographs more directly, painting or drawing on or around them, or in the case of Elke Tangeten (born 1968), embroidering images of figures both sacred and secular with bright strands of yarn, accenting light or enhancing garments with a scattered mosaic effect. Using color pencil, Leopold Strobl (born 1960), one of the most refined artists here, transforms little newspaper images into Surrealist landscapes dominated, if not wholly consumed, by curvaceous masses of black under inevitably green skies.

Like several artists in the Reformatting section, Jesuys Crystiano (around 1950-2015) elaborates photographs with drawing, mostly of fantastical faces and figures of a medieval mien. The best one shows Joseph Beuys’s famous 1963 “Stuhl mit Fett” (“Chair with Fat”), surrounded with drawn images centering on a mountainous landscape. They illustrate the single, and probably apocryphal, event in his art and life: the crash of his Luftwaffe bomber in the Crimea in 1944 and his rescue by nomadic Tatars who wrapped him in fat and felt, two materials that figured prominently in his work.

The work of Horst Ademeit (1937-2010), a recently discovered German artist already widely appreciated on both sides of the Atlantic, results from strong archival tendencies and also a fear of dubious “cold rays.” He made thousands of Polaroids showing a table arrayed with newspapers (mostly the tabloid Bild-Zeitung, which has color) and sometimes food. After measuring the rays emitted by each arrangement with a Geiger counter, he then numbered and wrote his findings around its image in minuscule script. Ademeit photographed other supposed sources of the rays, like electric meters, but the collagelike tabletops wreathed in obsessive language are especially compelling.

This section ends with photographs of supposed spirits, aliens and U.F.O.’s taken almost entirely by unidentified artists. But it begins with the enigmatic images that John Brill (born 1951) takes and then heavily manipulates in both the darkroom and on the computer, which argue almost convincingly for the existence of the spiritual realm.

Photography has contained multitudes at least since cameras and film became widely available early in the last century. Now that film and cameras are disappearing, the art we see in this exhibition may be a dying one. If so, “Photo Brut” arrives just in time to humble and excite. It delineates an alternative universe of urgent expression and sharpens the eye for another one that may wait round the corner, perhaps on the internet. Charged by desperate talent that would not be denied, the show proves once more that art, or a close second, will out.