President Joe Biden released his 2020 tax returns yesterday on the IRS’ delayed tax deadline of May 17, an event that might have gone entirely ignored given the routine nature of his disclosure had there not been an abrupt break in tradition with his predecessor, former president Donald Trump. Given that Trump, however, refused to release his tax returns both as a presidential candidate and then while POTUS, those within and reporting on Biden’s administration have been unable to resist pointing out the one president who failed to disclose his finances to the public in the manner of those who preceded him (and now, in the manner of his successor). 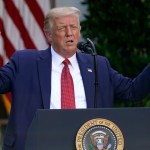 Does Donald Trump Know He Could Be Arrested This Year?

Washington Post reporter Josh Dawsey conveyed this message from the White House on Twitter, and followers were quick to pick up on the ever-so-slightly shady nod at Trump’s failure to produce his tax returns: “From the White House: ‘Today, the President released his 2020 federal income tax return, continuing an almost uninterrupted tradition.’”

MSNBC’s Kyle Griffin reported on the same, adding that “the President has shared a total of 23 years of tax returns with the American public” over his years in public office. This year, Biden reported paying $157,414 in federal income tax for the previous year’s earnings; meanwhile, the New York Times‘ report on Trump’s acquired tax records shows him paying $0 in federal income tax for 10 out of the last 15 years.

Clearly, Trump’s failure to disclose his tax returns as expected remains a sore spot for those who expected that all Presidents of the United States ought to be held to the same standard of transparency — or anyway, ought to prove that they themselves contribute to taxes in the country over which they now preside. It’s a low bar for a point of pride, but as criminal investigations surrounding Trump’s financial dealings continue to escalate, perhaps the journalists reporting on the White House team simply wanted to opportunity to remind us just how much the former POTUS has seemingly attempted to conceal.

Before you go, click here to see presidential families over the years.