Most years, Presidents’ Day is treated as little more than a shivery three-day weekend. But with a new chief executive in office, a former one on trial for impeachment and several statues of past presidents pulled down last year, maybe the holiday can offer time to reflect on the presidency and the ambit of our country in general.

Do we still admire George Washington, knowing that he owned slaves? Abraham Lincoln’s treatment of Native Americans merits scrutiny, as well. But on the third Monday in February, a date that often falls between the two leaders’ birthdays, Presidents’ Day asks a nation to celebrate them, which should also mean questioning them, learning from our past so that we can envision a better future. While the kids are off from school, here are some suggestions for what to do virtually or in person in New York City.

Last year the New-York Historical Society opened a permanent exhibition that recreates the Oval Office as decorated for Ronald Reagan’s second term. (Love the rose curtains. And the matching pink phone.) The space includes a replica of the Resolute Desk, a gift from Queen Victoria. Visitors cannot sit behind it for photo ops right now, but they can still take selfies in the room. There are other presidential artifacts on hand, including Washington’s inaugural Bible.

The society also invites visitors to participate in an interactive game, Playing the President: FDR’s First Hundred Days. By reading historical documents and consulting virtual advisers, you too can help pull America out of a depression.

Lincoln’s modest home in Springfield, Ill., remains closed, but the National Park Service has arranged a virtual tour instead. Enjoy the bold choices in carpeting! For a somewhat grimmer sojourn, click through a virtual tour of Ford’s Theater, the site of Lincoln’s assassination, in Washington, D.C.

While Washington’s Mount Vernon Estate remains open, it also features robust virtual offerings, some of which include to-go food pairings. In the area for Feb. 13 or 27? Pick up hoecakes and sweetmeats for a virtual tea with Martha Washington. (Maybe not the actual Martha Washington?) The virtual jewel: An extensive tour, including videos, stories, 360-degree views and close-ups of furniture, curios and a recipe for Martha’s “Great Cake.” The tour includes quarters that housed enslaved people and some description of their lives on the estate. 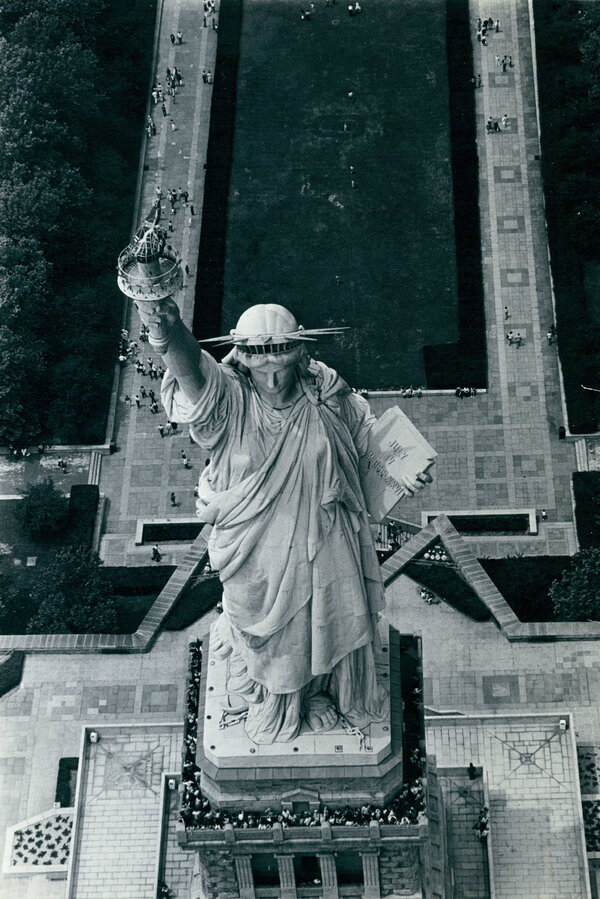 A chance to see Lady Liberty

America has a mixed record when it comes to welcoming the tired, the poor and the yearning huddled masses. But to acquaint yourself with a 151-foot symbol of its promise, consider a visit to Liberty Island and Ellis Island. While the statue’s interior remains closed, the museums on both islands have reopened, with Covid-19 protocols in place.

At the Statue of Liberty Museum, visitors can see how the structure was produced and installed, as well as the original torch. On neighboring Ellis Island, visit the National Museum of Immigration to see photos, videos and heirlooms. Stop by the Family History Center in the hopes of learning your own story. Research assistants are on hand, if you and your genealogy need extra help. (The center is closed on Presidents’ Day itself.)

A stroll-it-yourself in New York

In Lower Manhattan, Washington’s fans might begin at Fraunces Tavern Museum, where in 1783, before it was cool, he ordered takeout. The upstairs hosts a museum and a re-creation of the room where Washington spoke to his officers. Stop in front of Wall Street’s Federal Hall, a national memorial and the site of Washington’s 1789 inauguration, as well as the first Supreme Court and Congress. (While the original building was demolished in 1812, the new hall has a piece of the balcony where Washington stood.) The hall is currently closed, but there are virtual exhibitions for Black History Month and Presidents’ Day.

A bit further uptown, you can stand outside Cooper Union, where Lincoln gave a famous antislavery address. Or head to the Bronx to see the Morris-Jumel Mansion, which Washington briefly used as a headquarters during the Revolutionary War. It is open for in-person visits, with a virtual tour also available.

Meet the president, on film

Most likely you have seen “Hamilton” on Disney+ by now. And perhaps you have enjoyed Daniel Day-Lewis’s grizzled visage in Steven Spielberg’s “Lincoln,” available on HBO Max. But there are plenty of other filmic and limited-series takes on past presidents.

If real presidents have you down, you can feel even more down with the recent limited series “The Plot Against America,” on HBO, which imagines that the aviator Charles S. Lindbergh, a fascist sympathizer, has won election. Or relax with romantic comedies like “The American President,” in which Michael Douglas’s POTUS falls for Annette Bening’s elegant lobbyist, or “Dave,” in which Kevin Kline’s presidential impersonator sort of becomes president. Both are rentable on various sites.

Remember that even a terrible president can inspire a delightful movie, like 1999’s splendid “Dick,” available on Showtime, in which two teenage girls (Michelle Williams and Kirsten Dunst) bring down Nixon.