Thursday was such a monumental day for Prince William and Prince Harry because the statue they lovingly commissioned in honor of their late mother, Princess Diana, was finally shared with the world. The event came amid a very public feud between the two brothers, but one royal expert sees this day as a “baby step” in the right direction for healing the rift. 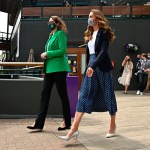 Katie Nicholl spoke with ET and shared that just by watching the two royals casually converse throughout the afternoon “does feel like a step in the right direction.” There is obviously a lot of care and love between the Duke of Cambridge and the Duke of Sussex, and maybe it took a day of focusing on Diana on the grounds of their childhood home at Kensington Palace that started to thaw the ice. “Harry himself has said he wants to repair relationships with his family. He said that he loves his brother,” she said. “He acknowledges it’s going to take time for the relationship to heal. But the end game is the hope that it will heal.”

That healing will not happen overnight on either side because Prince William is “still very bitter and very hurt” by the allegations of racism launched against the royal family in the Oprah Winfrey interview with Harry and Meghan Markle. Both sides will have to find a way to come together to privately discuss some of the more tender issues between them, but there is one thing Nicholl thinks they agree upon. “They both recognize that a fracture that divides key and important members of the royal family is something that can only be ultimately damaging to the monarchy,” the royal expert shared.

With both sides understanding that a royal rift helps no one, each visit to the U.K. will hopefully get easier for Prince Harry, and hopefully, Meghan (and Archie and Lilibet). This situation will take a lot of work moving forward and the brothers have to be invested in their relationship — otherwise, Thursday’s united front will be a blip on the radar.

Before you go, click here to see the best photos of Prince Harry and Prince William growing up together over the years.