It’s getting hot in here, so roll up all your sleeves! Well, Prince William already has, and for that we — and Twitter — are grateful. 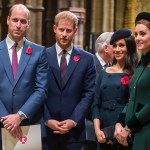 The Duke of Cambridge received his first dose of the Covid-19 vaccine on Thursday, May 20, sharing a snapshot of the momentous occasion to the official Duke and Duchess of Cambridge Twitter account. “On Tuesday I received my first dose of the COVID-19 vaccine,” he captioned the image. “To all those working on the vaccine rollout – thank you for everything you’ve done and continue to do.”

We’re thrilled to hear that Prince William has taken the first step in pursuing protection against the virus, especially considering he actually contracted it in November of 2020. But exciting scientific and medical advancements aside, Twitter users couldn’t help but comment on something else entirely: how attractive Prince William looks whilst exposing his extremely muscular and toned upper arm.

One user responded with a photo of Kate Middleton appearing warm, fanning herself. “Same girl, same,” she said alongside the image. A sea of replies swooned in unison: “Yup,” said one. “Truth,” another added. “May I just add this gif for all of us?” a third replied, attaching a gif of the Duchess playfully licking her lips.

A vaccine photo may seem like the furthest thing from sexy, but Prince William really does it for some people. He did, after all, win the prestigious title as “world’s sexiest bald man” just two months ago. Plus, we’re happy to see the Duke receiving such positive attention when Prince Harry beat him in the title of “Sexiest Royal,” as chosen by People’s readers.

We’re looking forward to the second vaccine by selfie, and we’d say it’s safe to assume that some Twitter users are, too.

Before you go, check out the 100 best photos of the royal family from the past 20 years.