With the United States preparing to withdraw forces from Afghanistan, a Times reporter who has covered the naval base in Cuba reflects on those original prisoners. 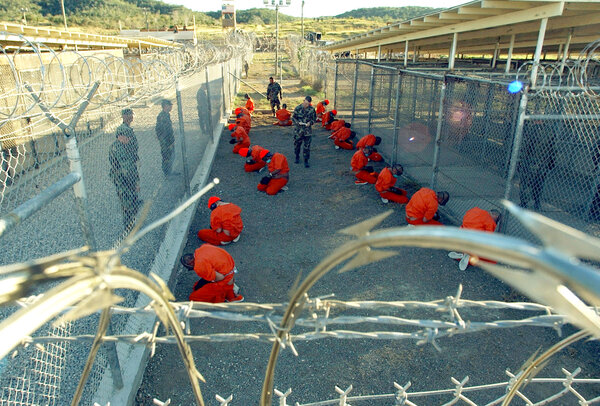 Times Insider explains who we are and what we do, and delivers behind-the-scenes insights into how our journalism comes together.

WASHINGTON — It was a scary, raw time just four months after the attacks of Sept. 11, 2001, when the military at Guantánamo Bay received its first prisoners from the U.S. invasion of Afghanistan.

The secretary of defense, Donald Rumsfeld, had declared the isolated Navy outpost behind a Cuban minefield “the least worst place” to hold suspected Taliban and foreign fighters, most of whom had been handed over by local allies.

I found myself sitting in the midday sun on a small dusty rise above the base airstrip watching pairs of Marines walk 20 captives down the ramp of a now obsolete military “Starlifter” cargo plane.

A small knot of civilian reporters was permitted to watch, but not take photos, in exchange for sending a pool account to the Pentagon press corps. Here’s an excerpt:

2:55: First prisoner comes off. He is wearing a fluorescent orange jumpsuit, a shiny turquoise face mask, goggles, similar colored orange socks over white footwear, a brighter orange head cover that appeared to be a knit cap. His hands were manacled in front of him, and he limped. He was frisked and led, by at least two Marines, to the awaiting bus.

When I talk to people about that day, on the radio or to students, I say, “Close your eyes and imagine men in orange jumpsuits on their knees at Guantánamo Bay.” BBC's Garden Rescue will be back on-screen this month - but it's not all good news for fans of the...