The producing duo, who are the founders of Campbell Grobman Films, have been developing a “Red Sonja” movie for seven years, they told Business Insider.

“At the time, you couldn’t really make female-driven [comic-book] films, so we were limited to a smaller budget, on a small scale,” Campbell said.

Red Sonja is a comic-book heroine — inspired by the fantasy works of “Conan the Barbarian” creator, Robert E. Howard — who takes revenge against the gang of mercenaries who kill her family and rape her. Campbell and Grobman said they believed in the character so much that they walked away from several interested companies, including Netflix, because they would have been limited to a budget between $7 million and $10 million.

The 2017 DC and Warner Bros. film shattered notions that female superhero movies couldn’t be successful by grossing $822 million worldwide. Campbell and Grobman said that the movie opened the door for them and Millennium Films, which is financing and coproducing the movie, to move forward with “Red Sonja.” Now, they’re aiming for a $100 million production.

“[After] ‘Wonder Woman’ worked, we decided as a group to go big or go home,” Campbell said.

Singer, known for directing “X-Men” movies and “Bohemian Rhapsody” (he’s the credited director despite being fired late into production) wasaccused by several men of sexually abusing them when they were young boys in an explosive Atlantic report published in January. Singer has denied the accusations.

For a time, it looked as if Singer would keep his job directing the movie, despite public outcry. Millennium CEO Avi Lernerissued a statement after the Atlantic report in defense of Singer, and said he was “very comfortable with this decision. In America people are innocent until proven otherwise.”

Lerner quickly walked back the statement, tellingThe Hollywood Reporter in late January that he greenlit the statement without reading it. 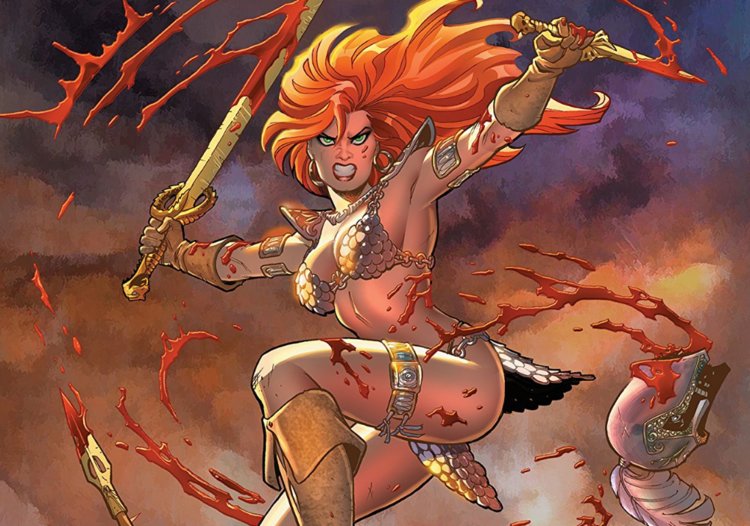 “I don’t want to apologize,” Lerner told THR. “I just want to clarify [the statement]. I think victims should be heard and this allegation should be taken very, very seriously. I just don’t agree to judge by the Twitter. I want [the accused] to be judged by the court.”

But in March,Millennium fired Singer because Lerner could not find a domestic distributor for the movie, according to THR. Campbell and Grobman said that it was a mutual decision between Millennium and Singer.

In regards to the allegations against Singer, Grobman said “everybody’s innocent until proven guilty.”

“We had a great experience with Bryan Singer on a movie that he produced [2014’s “The Taking of Deborah Logan,” which Campbell and Grobman were executive producers of],” Grobman said. “He was wonderful, he was kind. I can’t tell you enough positive things about the guy, professionally.”

“Jill found us,” Campbell said. “It’s about timing. It’s the right time for her. She hunted us down and said ‘I want to direct this movie.'”

“She’s brilliant,” Grobman added. “She was looking for something like this to make. She loves the subject.”

Soloway’s Emmy-winning Amazon Prime Video series, “Transparent,” will conclude this fall with a two-hour movie musical, freeing her up for “Red Sonja.”

Plot and release details for “Red Sonja” are under wraps, but Soloway is hard at work writing the script. It will likely be a far cry from the last time the character was on screen in 1985’s “Red Sonja,” when she was portrayed by Brigitte Nielsen.

“She was so passionate about the character and her journey, and her take on what she wants to do with the movie,” Campbell said of Soloway. “Her pitch was very fresh. She’s so talented and she’s part of the wave of the future. She’s taking us on a journey to where we’re going, similar to what ‘Black Panther’ did. It’s not going to be what you think it will be. It will be something completely different.”

Whatever direction the movie takes, it will likely try to embrace audiences of all kinds.

“I think ‘Red Sonja’ will be PG-13,” Campbell said. “It’s going to be for everyone. She’s a female-empowerment character, and you want every little girl to want to be Red Sonja. That’s the goal. There’s a part of her in every female. That’s why we were attracted to the project.”