Claudia Rankine is the prophet of Trump’s America. It’s a thankless job, and one that, to some extent, all Black Americans are qualified for, just by the nature of our presence in a country that disregards us.

Of course none of this is new to Rankine, an award-winning poet, playwright and scholar whose anthropological examinations of whiteness have helped inform many of our recent conversations on race. In the rapidly assembled 51-minute film “November” — an adapted version of her play “Help” that was commissioned by The Shed but scuttled by the pandemic — Rankine and the director Phillip Youmans present a piece that, despite its self-consciously ornamental style, incisively conveys an urgent message of awakening for this America.

“You’ve joined us here in our liminal space, a space neither here nor there, a space of quarantine and uncertainty,” one of five actress-narrators filmed onstage at the Shed begins. If you know Rankine’s work, this should sound familiar. Much of the play double-dips from the text of her 2019 New York Times Magazine article “I Wanted to Know What White Men Thought of Their Privilege. So I Asked” and her latest book, “Just Us: An American Conversation.” 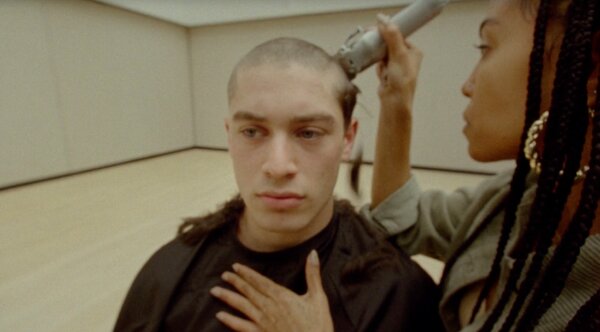 The script reflects on exchanges Rankine has had with white men in airports and on planes, alongside her typically cerebral musings on race relations and what she has termed the “racial imaginary,” a classroom-ready phrase describing the tension between one’s imagined notions of race — whether stereotyped or willfully ignored — and the reality.

Zora Howard, Tiffany Rachelle Stewart, Crystal Dickinson, April Matthis and Melanie Nicholls-King trade off parts of the lengthy monologue, which is paired with visual metaphors that recall Rankine’s fondness for hybridity, as expressed in her books “Citizen” and “Just Us.” Other performers — including a white man, a stand-in for the kind of white masculinity Rankine describes — recur throughout, playing basketball at an outside court, laughing at a party or swimming in a public pool.

Just a few weeks ago, I reviewed “Just Us,” a work that oftentimes feels too distant and meditative, as though stuck in the realm of race theory rather than the real world. “November” extracts the most striking language from its sibling and points it like a weapon at a racist America. “How many times have I been told not to be angry about my own murder?” one narrator asks. It’s one of many salient questions that Rankine offers in a tone both prodding and demanding of action.

“Should I, the Black woman, just get on with the program of accommodating white men, their lives, their lies, their lines?” she asks. Later, as we watch a Black woman lying on a white floor silhouetted by flowers, we are asked to consider the deaths of Renisha McBride and Breonna Taylor: “Why do I have to die in order for you to live?”

If you’re not grappling with why these questions are necessary right now, then you are doing something wrong.

Though “Help” was originally slated to be performed by one Black female narrator surrounded by a bevy of white men, “November” radically changes that dynamic. Though the multiple narrators would seem to be a way to show multiplicity — all Black women, not just Rankine — the play’s structure doesn’t work hard enough to earn it.

There are standout performers, though. Nicholls-King has the same unflappable coolness to her delivery as does the poet herself. And Howard, who is also a playwright, has both star quality and a powerful presence, as though each line were breathed directly into her body. (Her play “Stew,” featuring nimble dialogue and a bit of Shakespeare, beautifully told a tale of Black Americans stuck in a cycle of hardship and violence.)

If only Youmans, who garnered acclaim for his award-winning feature-film debut, “Burning Cane” (which he wrote, edited and directed while still in high school), could fully honor Rankine’s dazzling words with his imagery. Her heady writing requires space for contemplation, but Youmans’s intercut shots tend to compete with it.

The deliberately clumsy camerawork, shaky, unfocused and dizzying, reminded me of designer clothing that is meant to look distressed: art as calculated disarray. The whole aesthetic of the piece is affected: When we’re in the Shed, the narrators take to an empty stage with large chandeliers hanging from the ceiling behind them and three old TV sets, showing only static.

The theater feels both underdressed and overwhelmed by the distracting radiance of the chandeliers. But in this way and many others, “November” does capture the liminal space, not simply in an airport terminal, but in our current state of affairs.

Along with the staticky TV screens are other symbols of stalled progress: a Black couple in a car that eternally circles in a parking lot; underwater swimmers, coming toward and heading away from the camera. And of course, conceptually, “November” itself is in-between: theater and film, polemic and poem, documentary and interpretation.

To watch “November” on Sunday night was to experience it in-between, as well. Over the next several days its concerns will take on monumental weight for many viewers worried about the election. Yet even though the film was created and produced over the last four weeks, “November” doesn’t point directly enough to the protests and the pandemic, both of which involved Black lives. Nor do we see the poll lines, stretching into the horizon, that represent racial injustice so acutely.

That isn’t to say that Rankine doesn’t give us plenty to chew on; she always does. The past few years have made me freshly aware of my Blackness, in ways that are frightening and saddening and infuriating. Works like “November” remind me of what I find, as a Black woman, in everyday life: the slurs, the microaggressions.

As I wait to see what our democracy brings this week, Rankine’s work makes me consider the thought: Am I, too, a prophet of this America?