Welcome to Best of Late Night, a rundown of the previous night’s highlights that lets you sleep — and lets us get paid to watch comedy. If you’re interested in hearing from The Times regularly about great TV, sign up for our Watching newsletter and get recommendations straight to your inbox.

Trump Takes Credit for Canceling His Own Airstrike

Last Thursday night, The New York Times reported that President Trump had canceled an airstrike on Iran with 10 minutes to spare.

“Every day with this guy is like ‘Fight Club.’ One of these days we’re going to find him in the parking lot outside the White House beating the crap out of himself.” — SETH MEYERS

“One day he’s threatening war with Iran, the next day he’s claiming he stopped a war with Iran. One day he’s threatening to deport millions and rip apart migrant families, the next day he’s saying he delayed the deportations. It’s almost like he saw the polls and instead of running against the Democrats in 2020, he decided to run against himself. [Imitating Trump:] Vote for me! I’m the only one who can stop Donald Trump!” — SETH MEYERS

“The point is we are at peace, thanks to and in spite of President Trump.” — TREVOR NOAH

Trevor Noah found it interesting that Vice President Mike Pence was reported to have backed both of Trump’s decisions.

In a tweet last week, Trump said the military had been “cocked and loaded” when he called off the Iran strike.

“The expression is ‘locked and loaded.’ [As Trump:] I’m telling you, we were cocked and loaded, we were at Defcock 5, about to rain down a little cock and awe.” — STEPHEN COLBERT

“Even worse, Trump made the same mistake when he said he’s between a rock and a hard place.” — JIMMY FALLON

“‘Cocked and loaded’ sounds like the name of a Tom Green movie where a guy takes a road trip with a rooster.” — SETH MEYERS

The Bits Worth Watching

“The Late Show” parodied Trump’s interview with Chuck Todd in “Meet the Colbert.”

Desus & Mero went in on the Democratic candidates and their “swaggerless” favorite comfort foods.

What We’re Excited About on Tuesday Night

Olivia Munn will stop by her old stomping grounds, “The Daily Show,” to chat about a new season of “The Rook.”

Also, Check This Out 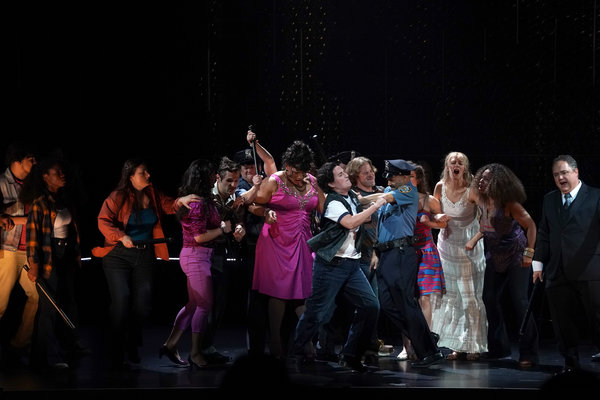 The New York City Opera commissioned a new work based on the Stonewall Riots, the watershed moment in L.G.B.T. history that took place 50 years ago this week.