This, we can all agree, is the year of the solo. Molissa Fenley’s thrilling “State of Darkness” is a raw and daring tour de force, full of grief and exaltation, fear and bravery. It explores the ravages of a pandemic, the destruction of the environment and the demise of endangered species.

And the big surprise? She didn’t choreograph it last week. “State of Darkness,” set to Stravinsky’s sweeping, propulsive “Rite of Spring,” dates to 1988.

Ms. Fenley first fell in love with the music after seeing the Joffrey Ballet perform Vaslav Nijinsky’s groundbreaking — and riot-producing — “Le Sacre du Printemps” (reconstructed by Millicent Hodson and Kenneth Archer), in which a young woman, chosen to be a sacrificial victim, dances to her death. She bought a recording of the Stravinsky the next day and began to listen to it during her warm-up; gradually, she found herself adding more movement, namely a deep shuddering in her torso and abdomen that made its way to the beginning of her dance. But she never saw the soloist in her work as the Chosen One.

When the Chosen One dies in the Nijinsky work, the dancer in Ms. Fenley’s solo comes forward into space — alive, functioning, reborn. As she put it, “They’ve gone through a rite of passage, and they have been changed.” 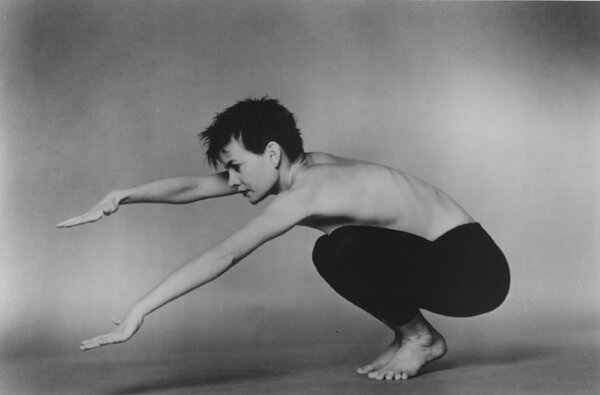 Along with her interpretation, Ms. Fenley’s look was fresh, too: She was topless, wearing only black tights. Her cropped hair and small, lean body radiated a kind of androgyny. And Nijinsky was never far from her mind.

“I felt that Nijinsky had always wanted to do this as a solo, and that I was finally doing it,” she said. “Isn’t that weird? It was just a thought I had in my mind.”

Though there won’t be a live audience, the onstage performances will be accessible through JoyceStream; the entire series is $150 per household (it includes extras, including a live Q. and A. with Ms. Fenley), and individual performances cost $12. The steps haven’t changed, but the solo is deeply personal for each dancer: No two renditions will be alike. And this time around, because of the livestream aspect, the women will wear bra tops.

“The most important quality for the dancer is to find themselves completely immersed,” Ms. Fenley said. “The music is unbelievably challenging and beautiful and frightening. It completely takes you over. There are many parts where the dance talks back to the score, sometimes going after an accent, sometimes going with an accent. The dance is really set up to deal with the music as a parallel entity. They’re simultaneous.”

And though the seven dancers possess years of expertise in ballet, modern and contemporary dance, the stamina required for “State of Darkness,” which runs at around 35 minutes, is off the charts. Ms. Mearns, a New York City Ballet principal known for her adventurous spirit when it comes to dance, said that the solo is the hardest role she’s ever attempted.

“You have to dig so deep inside of you to keep going,” she said. “And then midway through, it’s just like nothing else exists. I feel like I’m drowning in it almost, but in a good way.”

Ms. Fenley created “State of Darkness” after she gave up directing a company and began working as a soloist. Its precursor was “In Recognition,” which she choreographed in honor of Arnie Zane, the dancer and choreographer — and former partner of Bill T. Jones — in 1987, the year before Mr. Zane died of AIDS. They were close friends. “I wanted to make something for him as a tribute,” she said, “and dance it for him before he did die.”

“State of Darkness” continued her exploration of losing someone like Mr. Zane and of the AIDS epidemic. But she took it further. “A lot of the imagery is about endangered species,” she said. “I’ve always really been interested in environmental issues.” She was also thinking about racism. “State of Darkness,” she said, “looks at a lot of issues that have not gone away in our culture.”

The solo is primal, fervent and ornate, and its physicality is extreme: jittery steps and explosive kicks, which are suddenly swept away by the swirling spin of a contracted torso. In creating it, Ms. Fenley mapped out different zones on the stage: Upstage center, for instance, is a place of origination, emergence and rejuvenation; downstage center focuses on strength, mastery and dominance. She choreographed it at what was then the Dia Foundation on Mercer Street, on the top floor, where the windows gave off a shadowy effect. It helped her get into the mood.

“I would never turn on the lights no matter what the day was,” she said. “So if it was a really dark, rainy day, it was really dark in there and I could hardly see myself, and then other days it was bright and sunny. I was also rehearsing a lot with my glasses off so I could just see a form. A lot of the choreography came from that — from real feeling and then intuition.”

The solo was most recently performed by Rebecca Chaleff, in 2016; she danced with Ms. Fenley for several years and is now a dance scholar and the project’s rehearsal director.

“See you on the other side,” Ms. Chaleff is fond of telling the dancers before they perform a run-through while she watches on Zoom. During a recent rehearsal, the dancer Annique Roberts beat her to it by saying it first. Later, she was asked what the biggest physical challenge was for her. “My lungs,” she said with a laugh.

A longtime member of Ronald K. Brown’s company Evidence, which specializes in contemporary and African dance, Ms. Roberts was immediately drawn to the relationship that the movement has with the music. “She’s with it, she’s against it,” Ms. Roberts said of Ms. Fenley. “She drives it. She allows it to drive her.”

To make it personal, Ms. Roberts focuses on the idea of sacrifice. “What has come to me a lot when I think about this piece are my ancestors and the people that have come before me and the sacrifices that they’ve made so that I can live the life that I get to live,” she said. “It’s especially powerful during this time. People’s eyes are really starting to see the kind of state of darkness that African-Americans and Black people throughout the world have existed in, generations upon generations.”

There are other, more abstract elements there, too. Toward the end of a rehearsal last week — the dancers take turns, and Ms. Mearns had performed the final run of the night — Ms. Fenley remembered a point she had been meaning to make about the ending.

“It’s about entering into these different states so that at the end of it, there’s been a real gathering of knowledge and intuition and insight,” she said in her calm, clear voice. “Stepping into the light is stepping into insight.”

She couldn’t help but laugh at the dancers’ response — dead silence followed by gasps. “Yeah,” she added. “It’s kind of intense.”