Jean Khalife‘s role as an Advanced Concepts footwear designer at 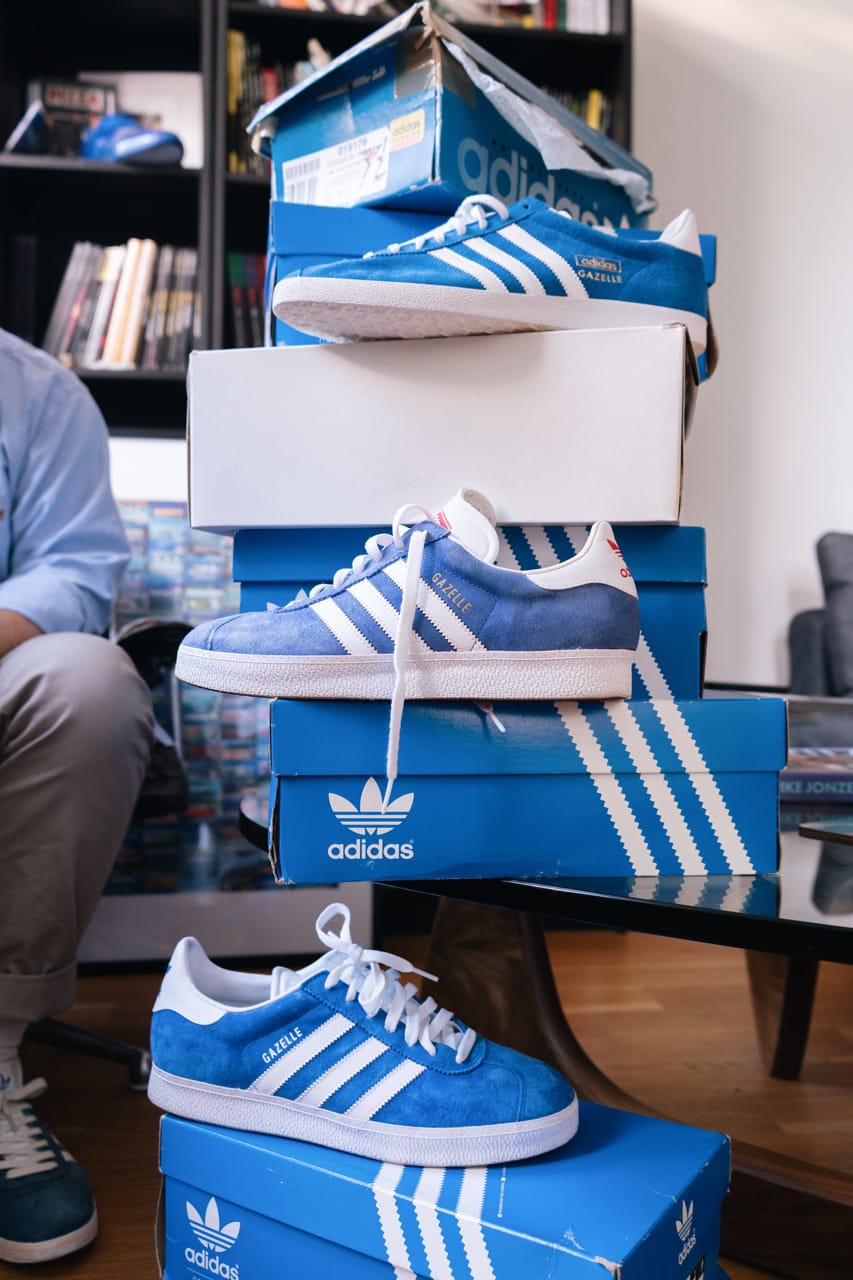 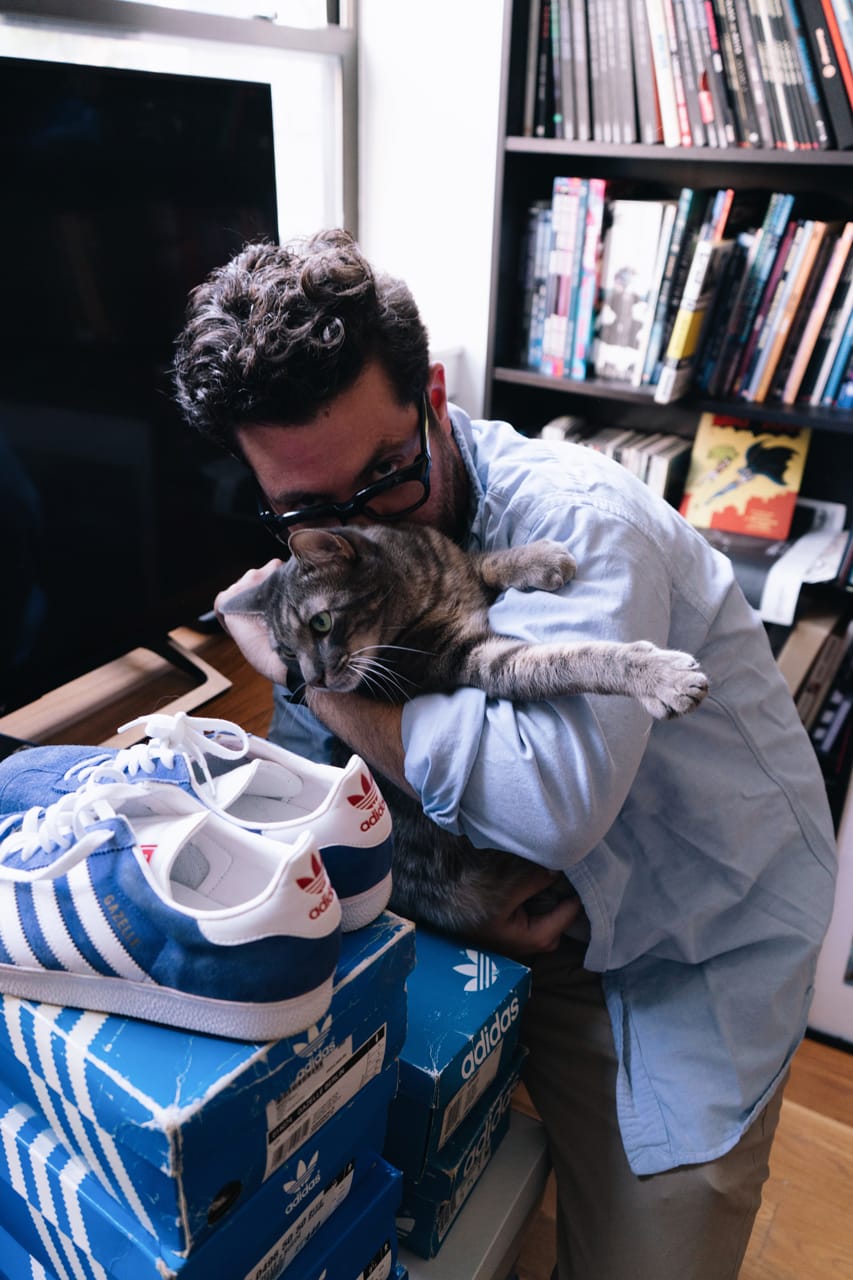 HYPEBEAST: You grew up in Metz, a town on the France/Germany border. How were sneakers viewed there? Was there any sort of “scene?”

Jean Khalife: Metz is very close to where adidas manufactured its French-made products in the ‘70s and ‘80s. That was before I was alive, of course, but adidas still had deep roots in Metz when I was a kid so I grew up wearing adidas pretty much exclusively. If you grew up in the ‘90s and you were on my side of the globe, that’s what you were rocking. I wore the Gazelle of course, and a lot of adidas Skateboarding styles too — the early Mark Gonzales stuff, Lance Mountain shoes, all the kicks the guys from Palace want to bring back these days [laughs].

“[The Gazelle] is a very accessible, democratic sneaker, but not everyone has a pair — so wearing it still makes you feel special.”

What about the Gazelle drew (and still draws) you to it over other adidas styles like the Stan Smith or the Superstar?

I’ve always thought that the Gazelle is an “outsider.” It’s an iconic adidas shoe for sure, but not the first one that you’d think of like the Stan Smith or the Superstar might be. It’s a bit more niche, and a bit of a paradox too: it’s a very accessible, democratic sneaker, but not everyone has a pair — so wearing it still makes you feel special. Apart from that paradox, I love how purposeful it was when it was first introduced: blue Gazelles were for indoor training, red were for outdoor training. The color codes were linked to the function, something that would probably never happen today.

From a design standpoint, I just love the quality. A full suede upper that takes colors amazingly, a funky, sort of ‘70s vibe that makes me think of watching Starsky and Hutch reruns as a kid. It was a terrace culture staple that got tied into the music I liked too. A lot of my favorite Britpop brands like Blur, Oasis and Jamiroquai were wearing Gazelles.

Another thing you were passionate about as a kid was comic books, which got you into drawing. Did that go hand-in-hand with your love of sneakers, or were those interests separate?

They were separate at first, but as I got older they became closer. I think it’s my passion for storytelling that brought them together. I loved sneakers and I loved drawing, so coming out of high school I was like “what can I do that feels artistic but won’t freak my parents out too much?” I landed on product design, and that’s when sneakers started to really mesh with art for me.

“I’ve been able to see a lot of different horizons and be very open-minded [during my career as a footwear designer]. It’s like being an actor and playing a part in different types of movies, doing a rom-com one day and an action movie the other. You learn different skills and get to flex different muscles, which is good for you as a creative.”

I was actually the first international design intern at Jordan Brand. That’s actually where I met Mark Miner and Marc Dolce, who are now my co-workers again at adidas, for the first time. I was 21 years old, spending time around veterans like D’Wayne Edwards … and I even met Michael Jordan, a pretty crazy experience for a kid fresh out of college [laughs]. Afterward, I went to Vans and was the only European designer there for two and a half years. I always kept in contact with adidas though, and was thrilled when the opportunity to work at the Herzogenaurach headquarters came up.

To answer your question about what I learned from these different brands, I think I’ve been able to see a lot of different horizons and be very open-minded. It’s like being an actor and playing a part in different types of movies, doing a rom-com one day and an action movie the other. You learn different skills and get to flex different muscles, which is good for you as a creative. I worked on basketball products at Jordan and classic skate footwear at Vans, so when I joined the adidas Originals team my learning curve wasn’t as steep as it might have been thanks to my diverse slate of experiences. 1 of 3 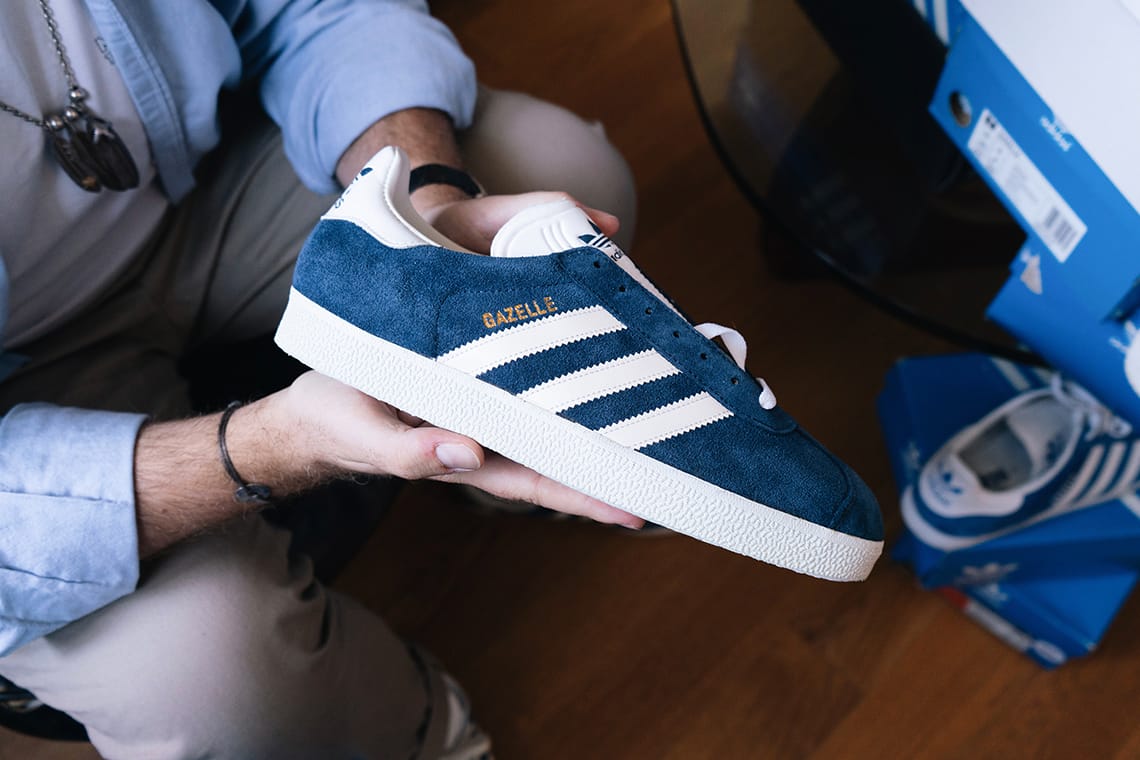 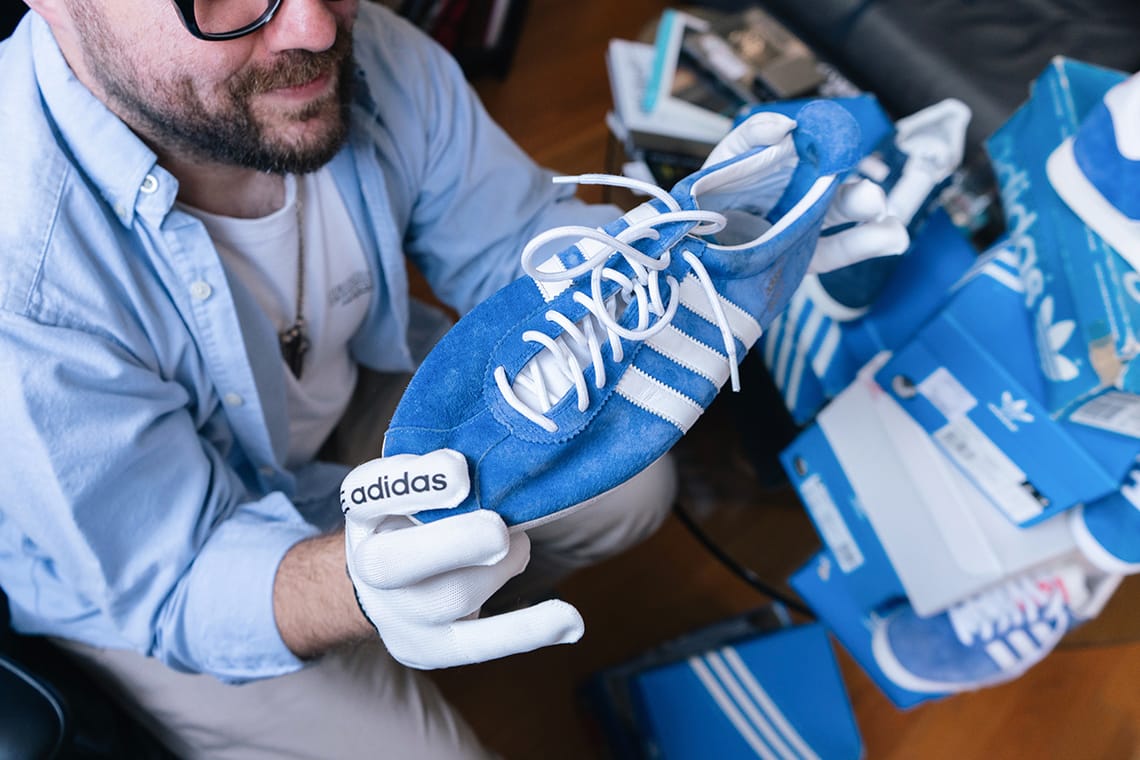 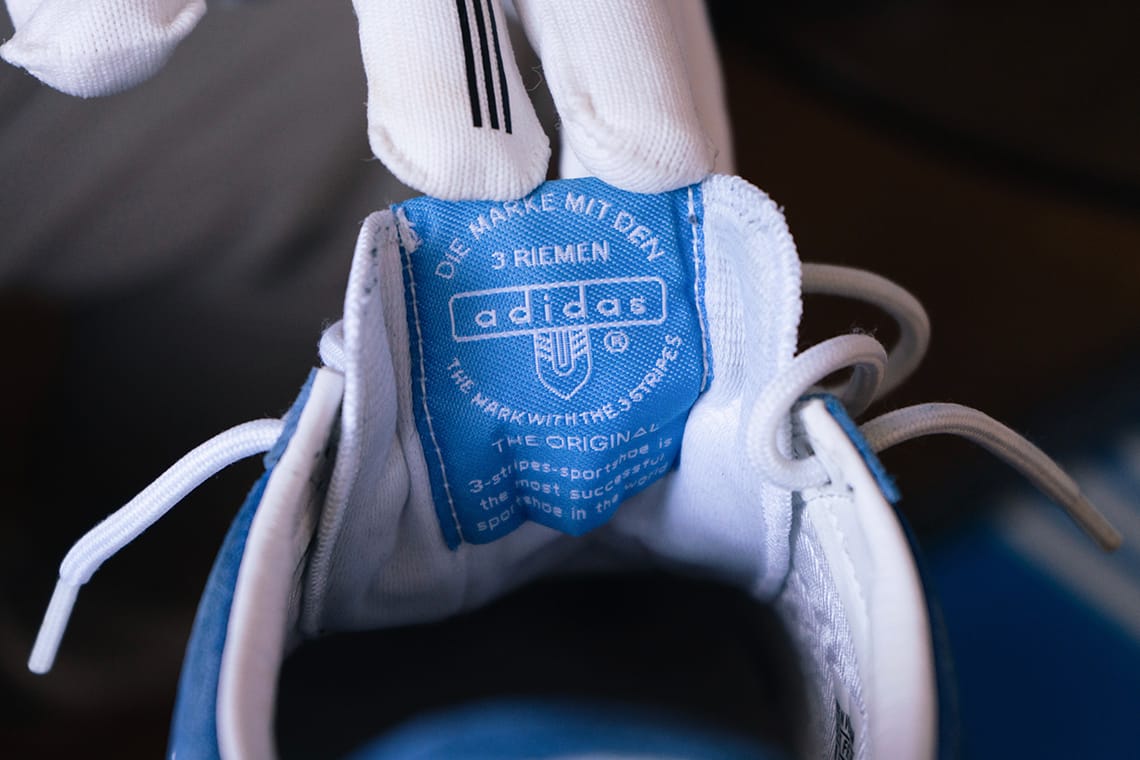 After getting to adidas, you were quickly tasked with bringing back the Gazelle. What did that feel like — bringing back a shoe that you’ve loved since you were a kid?

Bringing back the Gazelle was part of my very first season at adidas. I helped a little bit with the NMD R1 launch, then worked on an adidas Spezial shoe. The brand had just brought back the Stan Smith in a very successful fashion and the design team was like “let’s try to resurrect another icon.” Of course, I put the Gazelle on the table. A few weeks later the marketing team got back to me, and it was a go.

I was like a kid on Christmas morning. We went to the archives in the basement of the adidas headquarters, and were faced with a tough choice: which Gazelle do we bring back? There are decades worth of choices. There’s the West Germany Gazelles, the Yugoslavian-made Gazelles, Canadian-made Gazelles and even the Gazelle II, all of which have their own unique touches. After some thought, the ones we decided to bring back are the ones you’re wearing now [gestures at interviewer’s shoes]. It’s what I’d call a ‘90s Brit-pop Gazelle, the one all the musicians we talked about earlier used to rock.

What made you decide on that particular model of Gazelle?

It’s slightly beefier than the original ‘70s Gazelle, which is so trim it’s almost ballerina-esque. I thought the larger look might resonate a little better with the target audience. It was also the one I grew up wearing, and it just felt like the timing to reintroduce it was right. I put my white gloves on, removed a ‘90s Gazelle from the adidas archive and took it with me everywhere I went for four months. It even came to the factory in Vietnam to make sure it was being replicated properly.1 of 2 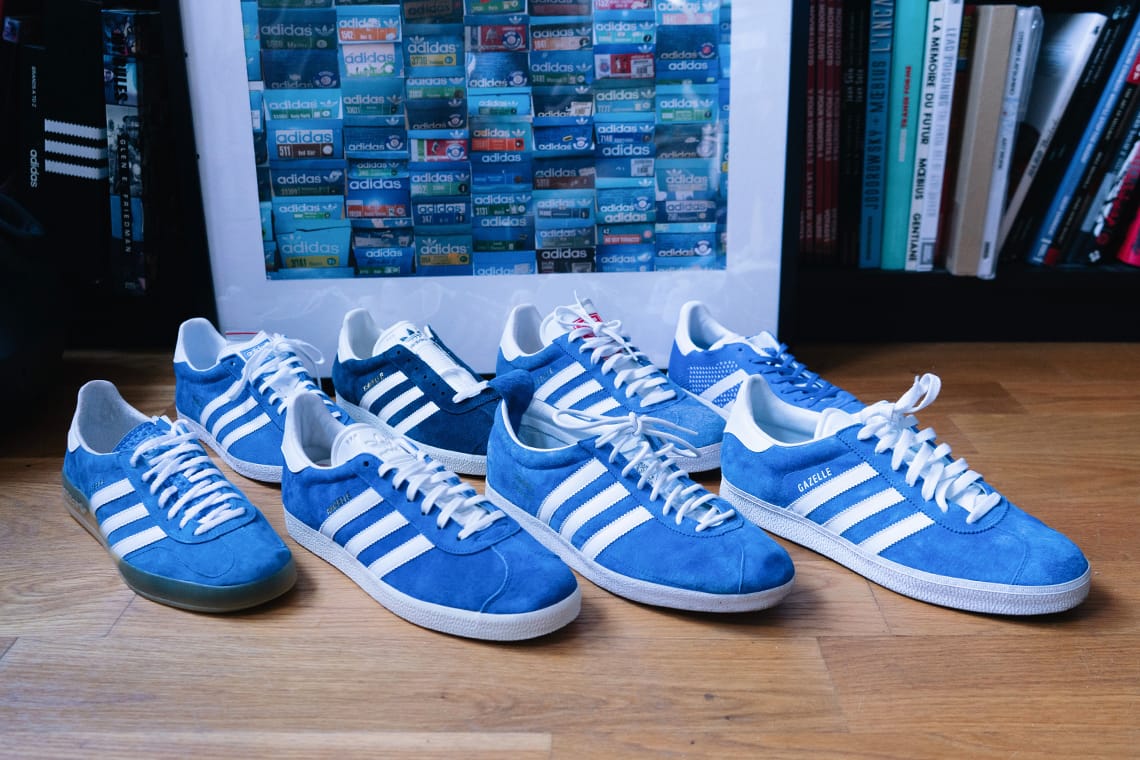 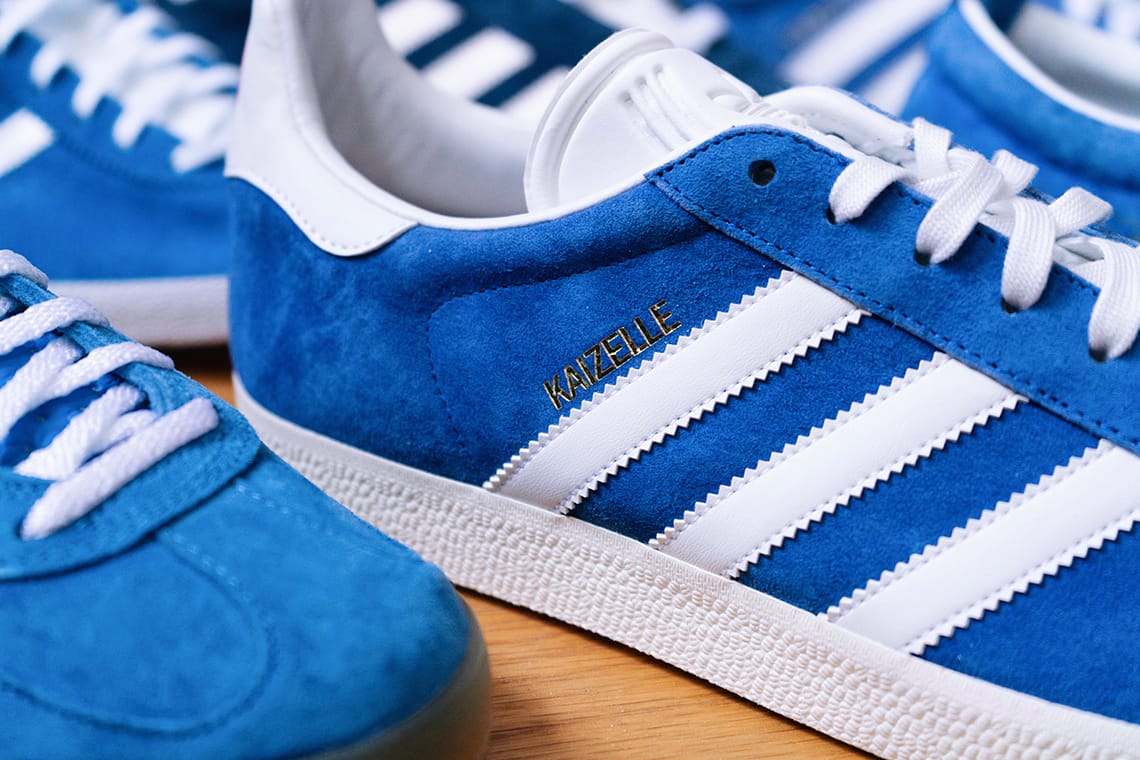 What was the biggest challenge in bringing the Gazelle back?

When you look at an archive shoe like the Gazelle, the pattern that’s used on it is extremely simple. There’s a handful of overlays, the signature stripes and not much more. This actually makes it really hard to reproduce, because the more overlays you have the easier it is to hide differences. With the Gazelle, there’s no room to hide any design elements that aren’t normal or true to the original. You’ve really got to spend time picking the right last, having the right grain on the foxing tape, working on the Ecotex tongue.

The simpler the model, the harder it is to retro it correctly?

Yes. You can’t hide behind some fufu design work [laughs].

“The beauty of bringing back an archive shoe is putting your heart and soul into it by working in all these different references from the past, all the while hoping a new audience will pick it up for a fresh reason.”

How does that process of bringing back an OG compare to launching a new silhouette like the NMD R1?

The whole process is different because the story is so different. With the Gazelle, you’re looking to encapsulate a bunch of different cultural references correctly. The beauty of bringing back an archive shoe is putting your heart and soul into it by working in all these different references from the past, all the while hoping a new audience will pick it up for a fresh reason.

Something like the NMD, you try to use the collective memory stored in the archives without becoming too trapped in them. That was our mindset for NMDs and shoes like the EQT ADV line, using bits and pieces from the past instead of the whole picture. You see that on the NMD’s midsole, which combined BOOST’s first-ever appearance on a lifestyle model with these super retro EVA blocks. Personally, I look for simplicity, boldness and that collective memory I just mentioned.

You’ve spent a lot of time in both Europe and the USA. What are the main differences you’ve noticed between how the Gazelle is perceived in each region?

That’s an excellent question. I think adidas’ USA audience is often focused on the latest and greatest like the YEEZY line and the UltraBOOST, and they may not know the brand’s history as thoroughly as the European consumer does. However, it’s interesting in the case of the Gazelle because people in the USA started looking at them a bit differently when Kanye West was wearing a pair back in 2017 and seen customizing a pair for Kim Kardashian. Someone of that stature choosing a classic seemed to spark some fresh interest in the States, and a desire to learn more about the model.

Another cool side note is that although the Gazelle was created at the end of the ‘60s, adidas created the Gazelle II, which we talked about a little earlier, in the early ‘00s, and it was specifically for the US market — its silhouette was a little beefier and a little more built up. 1 of 3 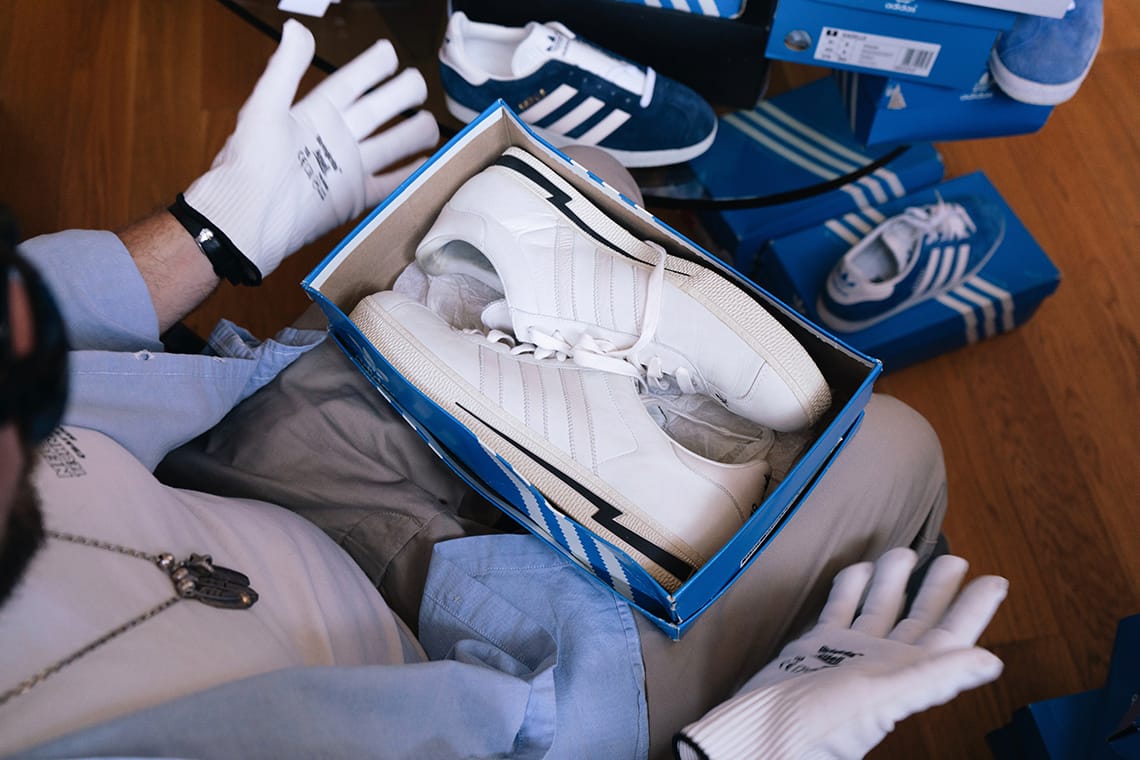 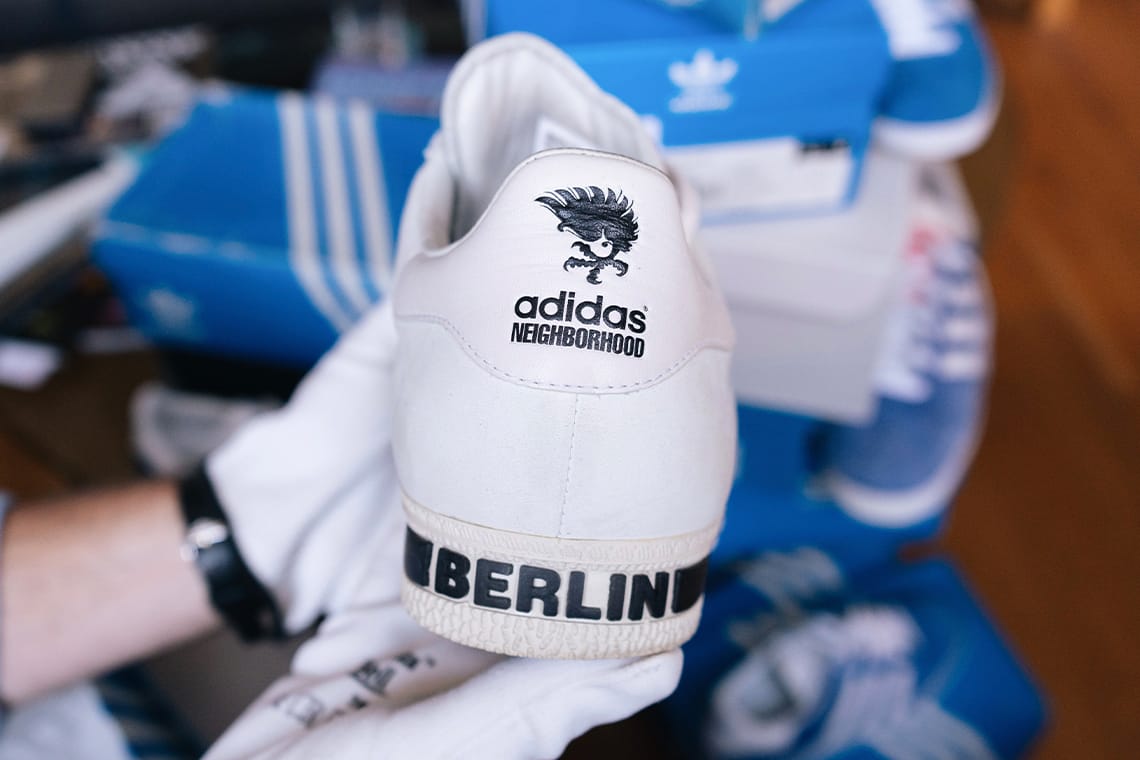 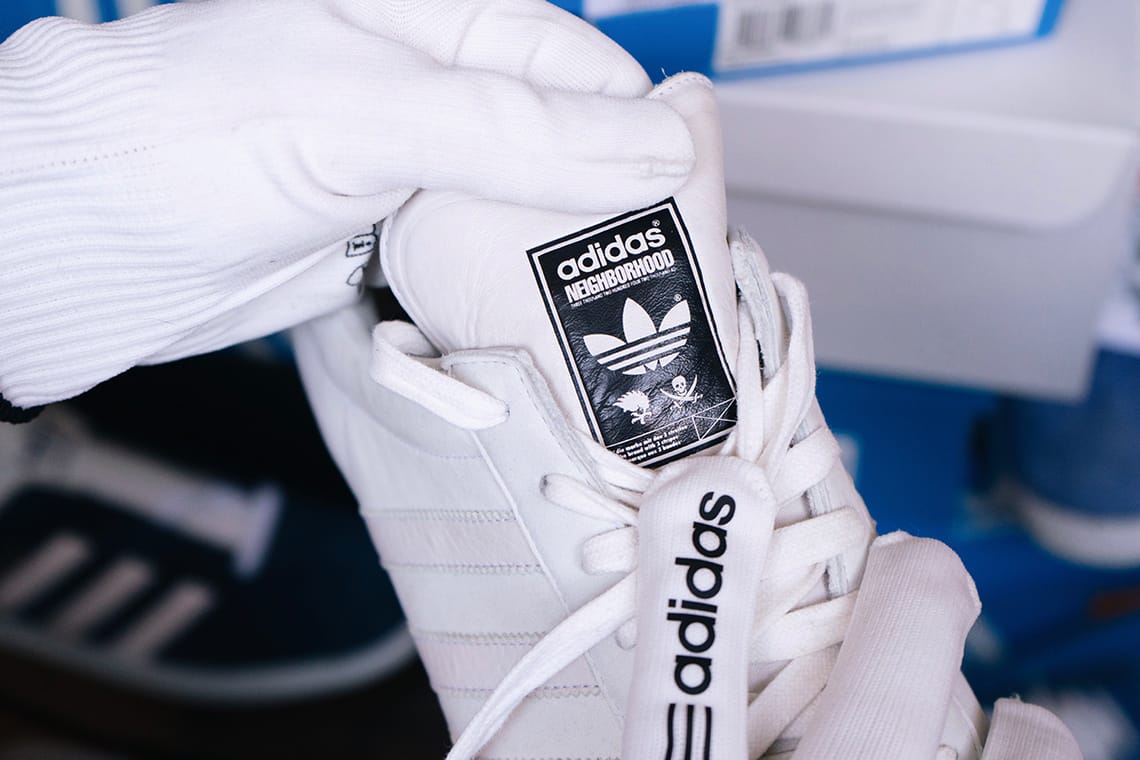 Why are sneakers important to you?

People who know me know that the Gazelle is my alpha and omega. I love it because it’s an “outsider” in terms of iconic shoes. Classics ebb and flow, but they never really go away. The Gazelle’s always been there, and I love it for that.
Source: Read Full Article