The Bridge theater in London has resumed performances after the coronavirus shutdown with a series of monologues by David Hare and Alan Bennett. 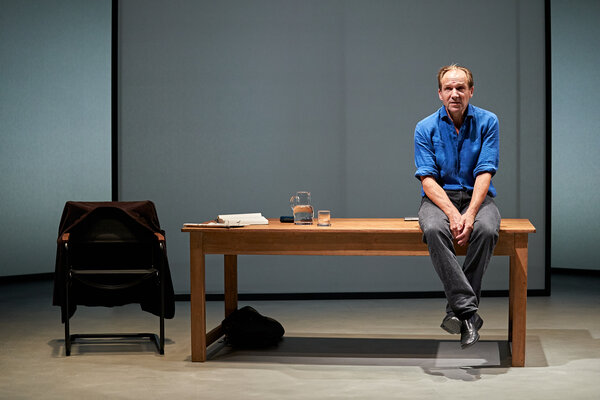 LONDON — Can we get his doctor’s number?

That’s a question that might occur to viewers of “Beat the Devil,” the 50-minute solo play at the Bridge Theater here, in which the playwright David Hare details his own experience of the coronavirus.

Hare, 73, makes repeated reference to a kind, smart general practitioner who helps him through a scary and grueling time as the illness takes hold, his temperature spikes and his mouth begins to taste of sewage. This physician is never identified during a reminiscence that feels more like a staged diary entry — and an entirely straightforward one, at that — than a full-fledged play.

We get news, however, about Hare’s wife, the designer Nicole Farhi, who is described lying across Hare’s steaming body to cool him down. And there are numerous broadsides, most of them fairly predictable, leveled at Prime Minister Boris Johnson and his colleagues in the governing Conservative Party, none of whom, Hare tells us, accept the slightest responsibility for any mishandling of the pandemic.

If “Beat the Devil” treads a familiar path, it breaks with tradition by offering the role of Hare to a star more than 15 years his junior. Whereas the writer presented his own monologues in productions such as “Via Dolorosa” and “Berlin/Wall,” the lone onstage presence on this occasion is Ralph Fiennes in fine, often bitterly funny form under the direction of Nicholas Hytner, who runs the Bridge.

The playhouse has reduced its seating capacity from 900 to 250 for a season of one-person shows that run through Oct. 31. To help prevent the spread of the coronavirus, audience members must have their temperature taken on arrival, and a one-way system leads into an auditorium in which most of the seats have been removed. Spectators sit masked, unless sipping drinks. One bit of good news is that there’s that much more space to put a jacket and bag.