The centrality of “Revelations” in the repertory of Alvin Ailey American Dance Theater is like nothing else in dance. Ballet companies may perform “The Nutcracker” every winter; the Ailey troupe performs “Revelations” on nearly every program, the whole year through. It’s the blueprint for most other works the company dances and the standard against which they’re all judged. It’s the perennial billboard for the company’s brand and its bible, too.

This year is the 60th anniversary of “Revelations.” But it’s also 2020. For the first time, the company’s winter season, usually a month of shows at New York City Center, is online and free. And alongside the difficulties of that adaptation lies the need to reassert the relevance of “Revelations” — and the company today — at the end of a year of pandemic, protests and all sorts of upheaval.

The season is meeting those challenges. Not flawlessly, but more than sufficiently. Since Dec. 2, the company has been releasing themed programs mixing archival and newly filmed performance excerpts with taped conversations about the dances and the moment. And crucially, this week those retrospective efforts were joined by two distinguished premieres: “A Jam Session for Troubling Times” (available through Dec. 21) and “Testament” (available through Dec. 24.)

“Jam Session,” by the company’s on-a-roll resident choreographer, Jamar Roberts, isn’t in the tradition of “Revelations.” He’s made his share of serious and historically weighted works, but here he takes the good-times mode of “Night Creature,” a 1974 Ailey classic set to a Duke Ellington score. The subject is similar, too: musicians and music lovers who keep very late hours.

More specifically, it’s about bebop musicians in the 1940s. Made to celebrate the centennial of Charlie Parker’s birth, it’s set to two tracks that Parker recorded live with Dizzy Gillespie, and it’s typical of Mr. Roberts to have avoided obvious choices. The first song (“Dizzy Atmosphere”) features a lightning-fast, quicksilver Parker solo that the choreography matches with solos of equivalent angular density. But the second (“Cubano-Be, Cubano-Bop”) is a drum-heavy, big-band orchestration of Afro-Cuban themes, which inspires a group effort. 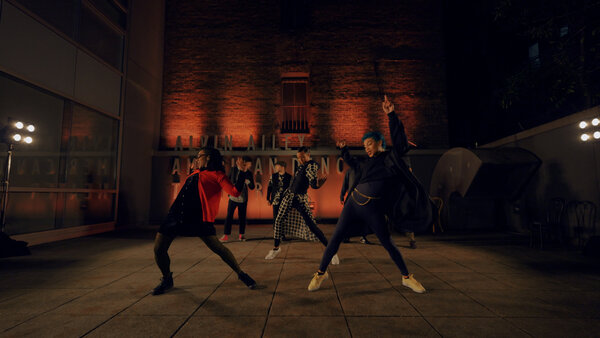 Improvisatory in feel but not in fact, Mr. Roberts’s choreography merges his own distinct rhythmic sensibility with the energy signature of each dancer, emulsifying contemporary physicality and period cool. The work is conceived for film and recorded on the dancers’ own turf, moving between a patio at the company building and an alleyway that ably fills in for the narrow spaces outside jazz clubs. The film is directed by dancers — Peter Walker and Emily Kikta, of New York City Ballet — and their feel and respect for movement is evident.

That’s much less true of “Revelations Reimagined,” a film directed by Preston Miller that debuted on the opening program. It alternates between mediocre new footage of “Revelations,” partially shot in the gardens of Wave Hill in the Bronx, and rare and glorious bits from a 1962 television special. Intended to establish historical continuity, the juxtaposition is most interesting for the differences it reveals: small details of choreography and an enormous gulf between the old dancers (somewhat wobbly, more visibly passionate) and the current ones (superhuman but closer to rote).

Otherwise, hyperactive editing shreds the dance’s structure and dissipates its force. And it didn’t help that the program kept interrupting the dance with celebrity endorsements and advertisements from corporate sponsors. If you’re craving “Revelations” or haven’t yet seen it, better to click on the exemplary 2015 Lincoln Center at the Movies recording, now online. (And here’s a holiday wish: Could somebody please post that full 1962 recording?)

One section of “Revelations Reimagined” does manage to be of the moment: a socially distanced version of the duet “Fix Me, Jesus.” Normally, it’s a work of heroic partnering, shared balances and lifts, but here Jermaine Terry and Sarah Daley-Perdomo don’t touch. Instead — as is explained later in the program — Ms. Daley-Perdomo’s husband stands in as a body double, only visible as a corporeal perch and lifting limbs. This safety accommodation subtly alters the meaning, making the man less of a preacher and more of an angel.

That’s intriguing, though I still prefer the standard version, danced impeccably on a different program last week by Glenn Allen Sims and Linda Celeste Sims. This married couple just retired after more than 20 years with the company, and the program was their sadly virtual farewell. Apart from “Fix Me,” the repertory didn’t show them at their best, but it did demonstrate their beautiful attunement to each other, their ability to “become one breath,” as Mr. Sims put it. They will be greatly missed.

Others of the earlier programs, with judiciously chosen excerpts, have usefully addressed spirituality, the collaborations of Ailey and Ellington, dance and social justice. In them, the artistic director, Robert Battle, is a thoughtful, good-natured host as well as a smooth pitchman, inviting guests (Wynton Marsalis, Toshi Reagon, Bryan Stevenson, among others) with something to say, even if — like him — they were saying things they’ve said many times before.

Which brings us to the other premiere. If “Jam Session” is an escape from “Revelations,” “Testament” is an explicit tribute. Choreographed by Matthew Rushing, Clifton Brown and Yusha-Marie Sorzano, it portrays, as described in Ms. Sorzano’s spoken word, an arc from “lament to hope, pain to power” — the shape of “Revelations.” Making better use of the Wave Hill location, it’s more cinematically expressive than “Revelations Reimagined,” though its director is the same.

In a sense, the pain is more explicit than in “Revelations.” An early section seems to take place in the creaking hold of a slave ship with voices moaning, “Why am I here?” Images of Black heroes and the civil rights struggle flash by, and it isn’t long before we’re out on a road, and Damien Sneed’s gospel score has kicked into a funky groove, and the dancers are wowing us with their power as the choir sings “I am worthy.”

It is that on-the-nose. A figure beautifully danced by Samantha Figgins inserts some welcome honesty, struggling with doubt amid the celebration, registering the fatigue of cyclical change. But Ms. Sorzano’s pop-mystical, self-affirmational language keeps dragging the dancing down into clichés of uplift.

That’s an Ailey pitfall, almost an Ailey tradition. You may find it distracting and disappointing, as I do, along with the advertisements. But I understand why it’s all there. This year, I’m more than willing to look past it for the spiritual sustenance this company provides, and not just in “Revelations.”