Every month, Netflix Australia adds a new batch of movies and TV shows to its library. Here are our picks for August, broken down by release date.

In the second season of this winning British sitcom, the Catholic teens from Derry, Northern Ireland, deal with typical adolescent crises such as finding a date for prom or procuring concert tickets. But, as with season one, the “Derry Girls” characters handle all this while facing the mounting tensions and violence between various Irish and Northern Irish factions in the mid-1990s. The show’s creator Lisa McGee (who wrote every episode) and director Michael Lennox continue to balance lighthearted, well-observed secondary school high jinks with the political concerns from McGee’s own childhood.

The thrilling Indonesian martial artist Iko Uwais — best-known for “The Raid” and “The Raid 2” — plays a San Francisco chef turned superhero in “Wu Assassins,” an English-language series with the bone-crunching action and special effects of classic ‘90s kung fu movies. Gifted with superpowers, the hero embarks on a world-saving quest. The simple plot here is primarily an excuse to pack in spectacular fight sequences set in colorful urban locations, all choreographed and shot with flair.

The early seasons of this stylish Spanish melodrama introduced the world of late ‘20s Madrid, and focused on four young career women trying to combat sexist attitudes while working at a telephone company. As the story plays out, “Cable Girls” features more serious intrigue, with the heroines getting caught up in criminal conspiracies amid the increasingly turbulent political and economic situations in Spain and abroad. 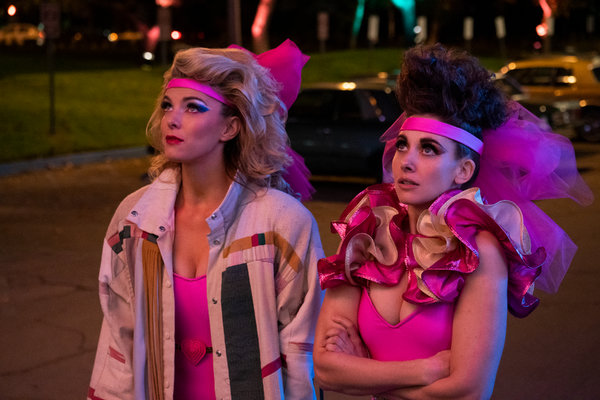 The acclaimed women’s wrestling sitcom “GLOW” had its share of heavy moments across the first two seasons. The performers — and especially the wrestlers played by the series’ outstanding co-leads Alison Brie and Betty Gilpin — have pondered whether they’re being exploited, or if their league’s director Sam (Marc Maron) has been feeding his audience gross ethnic stereotypes packaged as satire. But for the most part “GLOW” has been among the lightest of Netflix’s original series, telling short, punchy stories about likable underdogs. Expect that vibe to carry over into season three, which finds the characters moving their whole operation to Las Vegas.

After a first season that offered a look back at the early days of F.B.I. criminal profiling, “Mindhunter” returns for a second season, set a few years later between 1979 and 1981. The producer and director David Fincher is back on board, working with other directors including the arty genre movie specialists Andrew Dominik and Carl Franklin. The leading actor Jonathan Groff is back too for an eight-episode story arc that will cover the series of child murders that shook up the city of Atlanta and the United States 40 years ago.

The actress Charlize Theron is one of the producers on this unique new reality competition series, in which street racers and gearheads put souped-up sports cars to the test on an elaborate obstacle course. Shot on a crazy custom-built track in upstate New York, “Hyperdrive” is all about watching cool automobiles zoom around at top speeds, while dodging the kind of hazards usually seen in video games.

A sort of combination of “Shark Tank” and “The Great British Bake Off,” the reality series “Million Pound Menu” features aspiring restaurateurs showing off their cooking and their entrepreneurial skills to potential investors, in hopes of landing the money needed to launch the next big chain. The chefs in season two are just as personable and creative as those in season one. But as is the case with a lot of shows like these, the major appeal here is the look behind the scenes of a budding business, and the chance to see what today’s financiers think consumers want to buy.

A dream project for the Muppets creator Jim Henson, the 1982 fantasy film “The Dark Crystal” won some acclaim for its state-of-the-art animatronics and puppetry effects. But the movie failed to catch on with a mass audience, in part because it was burdened with a complicated plot set in a fussily detailed universe. The new prequel series “The Dark Crystal: Age of Resistance” retains Henson’s handcrafted look and his world of mystical wonders and warring races. But with 10 hourlong episodes — and with a voice-cast that includes Mark Hamill, Anya Taylor-Joy, Keegan-Michael Key, Helena Bonham Carter, Taron Egerton, Alicia Vikander and Andy Samberg — the TV version should have more room to give Henson’s original ideas their due.

Before the sequel “Zombieland: Double Tap” arrives in theaters, now’s a good time to revisit one of the most entertaining horror comedies of recent years. Directed by Ruben Fleischer and written by the “Deadpool” screenwriters Rhett Reese and Paul Wernick, the 2009 post-apocalyptic romp “Zombieland” stars Jesse Eisenberg and Woody Harrelson as survivors of a worldwide zombie plague, who first spar with and then ally with two crafty young women (played by Emma Stone and Abigail Breslin) on their way to a reportedly ghoul-free amusement park. Cleverly meta and surprisingly sweet, the original “Zombieland” is an end-of-the-world movie with a big heart.

Based on the William Sutcliffe novel “Whatever Makes You Happy,” the feel-good comedy “Otherhood” stars Angela Bassett, Patricia Arquette and Felicity Huffman as empty-nesters. Frustrated by how rarely they get to see their grown sons, they decide to do a surprise drop-in. Set mostly in New York City — where all three men live in varying states of arrested adolescence — the film is partly about how micromanaging moms sometimes struggle to adjust to their new parenting reality. But it’s also about three late-middle-aged women sowing some wild oats in a city of endless possibilities.

Like a lot of cult favorites, the writer-director Richard Linklater’s retro high school movie “Dazed and Confused” took a while to find its audience. Today though, the 1993 comedy is widely acknowledged as one of the best films of its decade: a hilarious and honest look at teenage rites of passage. Set over the course of one wild day and night — the last day of school in suburban Texas, in 1976 — “Dazed and Confused” follows groups of kids from different cliques and age groups as they drink heavily, smoke marijuana and philosophize. With its cast of then-unknowns, some of whom would go on to be stars (Matthew McConaughey, Ben Affleck, Anthony Rapp, Parker Posey and Milla Jovovich), this movie is a culture snapshot of both the mid-70s and the mid-90s.

One of the director Alfred Hitchcock’s best-known and most acclaimed thrillers arrives on Netflix this month. In “Vertigo,” James Stewart plays a detective who becomes obsessed with a woman (played by Kim Novak) whom he thinks resembles a lost love. The film is slow-burning, with its most memorable and shocking scenes coming amid masterfully crafted, hypnotic sequences that feel like waking dreams.

The writer-director Darren Aronofsky’s bizarre art-horror film “Mother!” has polarized audiences since its theatrical release in 2017. Love it or hate it, this is a movie any adventurous cinema buff should see at least once. Jennifer Lawrence and Javier Bardem play a married couple living in a country house, who see their idyllic lives of creativity and passion disrupted by a series of increasingly destructive visitors. Working with dense, sometimes dissonant combinations of metaphors, Aronofsky has created an unruly and overwhelming film about the planet Earth, and about the inhabitants rapidly wrecking it.

Documentary filmmakers Steven Bognar and Julia Reichert bring valuable perspective to some of the biggest issues facing the global economy with “American Factory,” an absorbing, illuminating and often quite funny film about what happened when a Chinese company opened a glass plant in the U.S. heartland. While charting the differences between Chinese and American work habits — as well the differences in the workers’ expectations — Bognar and Reichert tell a story that’s ultimately about the changing nature of labor in an increasingly automated age.

In 2017, the comedian Tiffany Haddish cemented her status as a rising star with her stand-up special “She Ready! From the Hood to Hollywood.” Now Haddish is passing the torch to other promising new talents with the series “They Ready,” showcasing six of her favorite comedians in half-hour sets. With performers ranging from Chaunté Wayans (a niece to Damon Wayans and Keenan Ivory Wayans) to the giddily profane, gender-bending Flame Monroe, expect a culturally diverse, unapologetically frank collection of jokes and jokers.

Want more Australia coverage and discussion? Sign up for the weekly Australia Letter, start your day with your local Morning Briefing and join us in our Facebook group.