This article is part of our latest special report on Museums, which focuses on reopening, reinvention and resilience.

Several eminent New Yorkers were by my side on a recent visit to the Guggenheim Museum.

“From bottom to top, the building is like a crescendo,” the actress Maggie Gyllenhaal told me as I climbed the rotunda’s massive, spiraling walkway. Later, I ran my fingers along the bumpy edge of the footpath’s low outer wall. “The highest overlook may be the most tactile spot in the whole space,” Ms. Gyllenhaal said.

Although this film star is not an acquaintance, she was speaking directly into my ear. Thanks to headphones and the internet, I was listening to her voice — and those of the actors Bobby Cannavale, BD Wong and Jeremy Pope, among others — on Mind’s Eye: A Sensory Guide to the Guggenheim New York.

A 10-track downloadable audio recording released last fall, the guide features detailed descriptions of the sights, sounds and surfaces encountered on an ascending walk through the museum. Conceived as an addition to the Guggenheim’s Mind’s Eye programs for the blind and partially sighted, the guide is like an album or a podcast: It can be played at home or inside the museum. It also provides an intriguing experience for visitors with normal vision, like me.

“We’ve started to think about Mind’s Eye differently,” said Cyra Levenson, the museum’s deputy director and the Gail Engelberg director of education and public engagement. “We used to think of it as a tour program.” Now, she added, “we’re moving toward thinking of it instead as a set of resources that anyone and everyone can use.”

Although many major art institutions have programs for people with disabilities, the pandemic has forced museums to recreate them in a digital space. In-person tours incorporating verbal descriptions for visitors with low vision, or American Sign Language interpretation for the hearing-impaired, have often transformed into Zoom sessions about specific artworks. 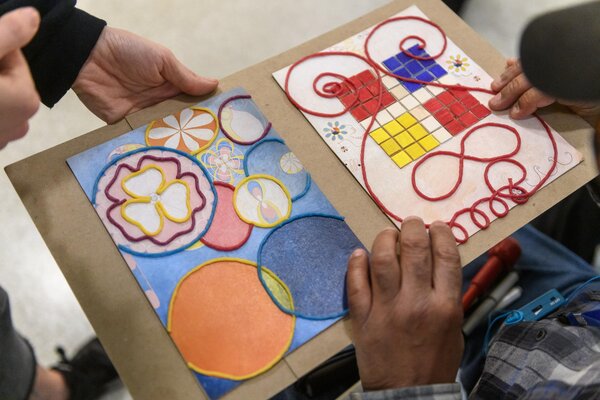 Some museums have also been able to create online versions of new initiatives that were planned before the pandemic, like the Metropolitan Museum of Art’s Met Memory Café for people with dementia and their caregivers. The Guggenheim has not only increased such offerings, however, but has taken Mind’s Eye and Guggenheim for All, which is for young people on the autism spectrum, in new directions.

“I think of the sensory guide as like a target with rings of influence,” said Karen Bergman, access programs associate at the museum, who wrote the guide’s scripts with input — and critiques — from Mind’s Eye participants. While most museum audio guides focus on artworks, “we’re doing something a bit broader, which is actually describing a whole building as a work of art,” she said. And “not only thinking of the visual world, but thinking of all of the senses.”

The guide, which was conceived in collaboration with Sound Made Public, a San Francisco creative agency, is free on the museum’s website and most audio platforms; I just called up the webpage on my cellphone. The hearing-impaired can also download transcripts of the guide online or from the Bloomberg Connects app.

“If you’re listening from home, you get a journey to the Guggenheim,” Ms. Bergman said.

That journey begins in an unusual place: not in the museum’s lobby, but outdoors, on Fifth Avenue. The voice of Marilee Talkington, an actress who is legally blind, describes the approach to the Guggenheim, remarking on traffic sounds and food aromas as well as Frank Lloyd Wright’s architecture.

The other narrators — all were selected to represent the city’s diversity — deliver segments with titles like “Incline,” “Light” and “Scale.” These highlight the interior’s specific qualities, often in poetic language accompanied by music.

In April 2020, the museum also enhanced its regular Mind’s Eye programs — twice-monthly two-hour Zoom descriptions and discussions of artworks — with weekly conference calls. Instituted in response to requests for further contact during the pandemic, these phone sessions have functioned not just as mini aesthetic explorations but also as memorials to Mind’s Eye participants who had died of Covid-19.

For those sessions, attendees “chose artworks that represented these beautiful people that we’ve come to know and care about over the years,” Ms. Bergman said.

The Guggenheim, which is also working on two new welcome-to-the-museum videos in sign language, has vastly extended its reach with the reimagined programs.

Participation in Mind’s Eye has nearly quadrupled, to more than 800 attendees (including repeats) since the pandemic’s start. The sensory guide was downloaded 17,470 times between its mid-October release and the end of April, and the museum’s free digital access programs have attracted participants with disabilities from as far away as the Netherlands, Korea and Australia.

The ability to attract a global audience has led the Guggenheim and other institutions (including the Met, the Museum of Modern Art, the Brooklyn Museum and the Whitney Museum of American Art) to plan to continue such online events — as long as demand persists — after they fully reopen.

“It’s really a community that has developed in the Guggenheim for All virtual programs,” said Melanie Adsit, the museum’s senior manager of youth, family and inclusion initiatives. “So if there are silver linings to the pandemic, that’s the one for me.”

Susana Montes, a New Yorker whose 13-year-old, Ian Aquino, has autism, told me that Ian enjoyed attending Zoom programs with a friend who had moved to London. And she added that although her son also liked on-site offerings — before the pandemic, the quarterly Guggenheim for All events would present a choice of activities and a designated quiet space — he appreciated the online programs’ structure and familiarity.

“All the students and participants really know what to expect,” Ms. Montes said. “They come prepared.”

In April, a guest artist with autism, Myasia Dowdell, discussed her work and answered questions during a Guggenheim for All program I observed. I noticed that some of the young people taking part chose to stay off camera and type their comments through the Zoom chat function.

“The technology is really equalizing,” Ms. Adsit said. “All of a sudden, we’re in this very democratic space, where everyone is in the comfort of their own home, and they’re participating through a preferred modality.”

She now offers the programs monthly and, based on participant feedback, divides them by age: one session for children 5 to 12, and one for teenagers. Recently, the museum also started an apprenticeship for a young college graduate with autism. The current apprentice and a teenage intern, who is on the spectrum, too, are working on a virtual exhibition of art by Guggenheim for All participants.

As the museum moves toward a complete reopening, it is also increasing access for all art enthusiasts. In June, the Guggenheim Teens internship program will have twice as many participants — at least 30. And on May 1, the Guggenheim began a program I’m looking forward to sampling: Saturday on the House, a monthly day of free admission for all.

“This last year has helped us redefine what we think a museum is,” Ms. Levenson said. Instead of treating visitors, whether they have disabilities or not, as audience members, “we’re placing them in the role of producing content with us.”