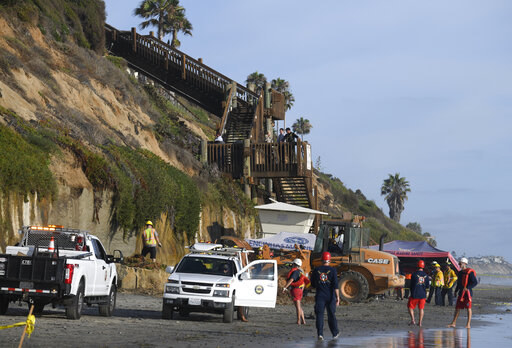 Three people were killed Friday afternoon after a cliff collapsed on a beach in Encinitas, California, officials said.

One person was declared dead at the scene, and two others died of their injuries at the hospital. Another two people were also injured.

The victims were buried in tons of rubble after a 30-foot-long sandstone chunk broke free of the oceanside bluff and fell onto the Southern California beach, which is a popular surfing spot.

“They were facing the ocean,” Encinitas Fire and Marine Safety Capt. Larry Giles told the Washington Post. “So, it came from behind them and basically overtook them and crushed them.”

Cadaver dogs were brought in Friday to search the debris for more victims, according to the local CBS station, but there have been no new reports of people still missing or trapped.

“I saw first responders, and I saw lifeguards frantically digging people out of the debris,” Jim Pepperdine, who lives near the area, told the San Diego Union-Tribune.

“They were clearly distraught,” Pepperdine said. “It was a normal beach day gone awry.”

The identities of the victims have not yet been made public.

Encinitas Mayor Catherine Blakespear said in a statement said she is “devastated by the tragedy today and our hearts go out to the victims and their families.”

“We stand ready to help in any way possible,” Blakespear said. “Our engineers and the public safety team are diligently working to assess bluff conditions.”

Bluff collapses such as this one occur due to natural erosion, and Encinitas citizens are warned about their dangers on the city’s website.

“This erosion is usually slow and gradual, but sometimes occurs in major bluff failures or collapses. Being caught in a bluff collapse area can cause serious injury or death,” a beach safety guide on the city’s website said.

Several people have died over the years in similar cliff collapses in the area. In 2000, 30-year-old Rebecca Kowalczyk reportedly died on the same beach when a piece of the bluff fell and buried her.