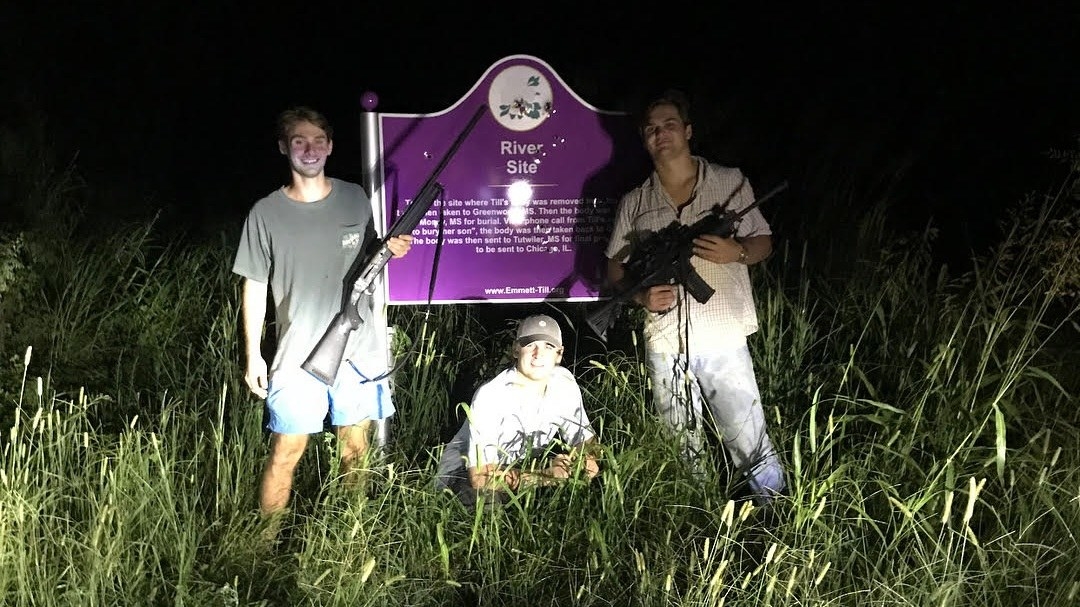 On Thursday, what would have been the 78th birthday of Emmett Till — the 14-year-old black boy who was lynched in Mississippi after being accused of offending a white woman — a photo surfaced showing three young white men posing with guns in front of his bullet-ridden memorial.

Till’s memorial marks the spot where the boy’s body was pulled from the Tallahatchie River in 1955, after he had been brutally beaten and killed in what became a watershed moment for the country’s history of racial violence and a catalyst for the civil rights movement.

The photo — first reported by the Mississippi Center for Investigative Reporting (MCIR) and ProPublica — showed the three University of Mississippi students smiling as they held the firearms, including an AR-15–style semiautomatic rifle, at night.

It is unknown if the students themselves shot up Till’s memorial or if the sign — which has been subjected to years of vandalism — was already riddled with bullets when they posed for the photo.

LeClere posted the now-deleted photo on his Instagram account March 1, which was Lowe’s birthday, MCIR reported. “One of Memphis’s finest and the worst influence I’ve ever met,” LeClere wrote in the caption.

US Attorney Chad Lamar of the Northern District of Mississippi told MCIR he had referred the photo to the Justice Department’s Civil Rights Division for further investigation. A spokesperson for the department told BuzzFeed News on Friday that they do not “confirm, deny, or otherwise comment on investigations.”

Lamar’s office did not respond to a request for comment.

A fraternity spokesperson did not identify them, but said that “this was the strongest discipline they could take at the time.”

“The photo is inappropriate, insensitive, and unacceptable,” the fraternity’s statement said. 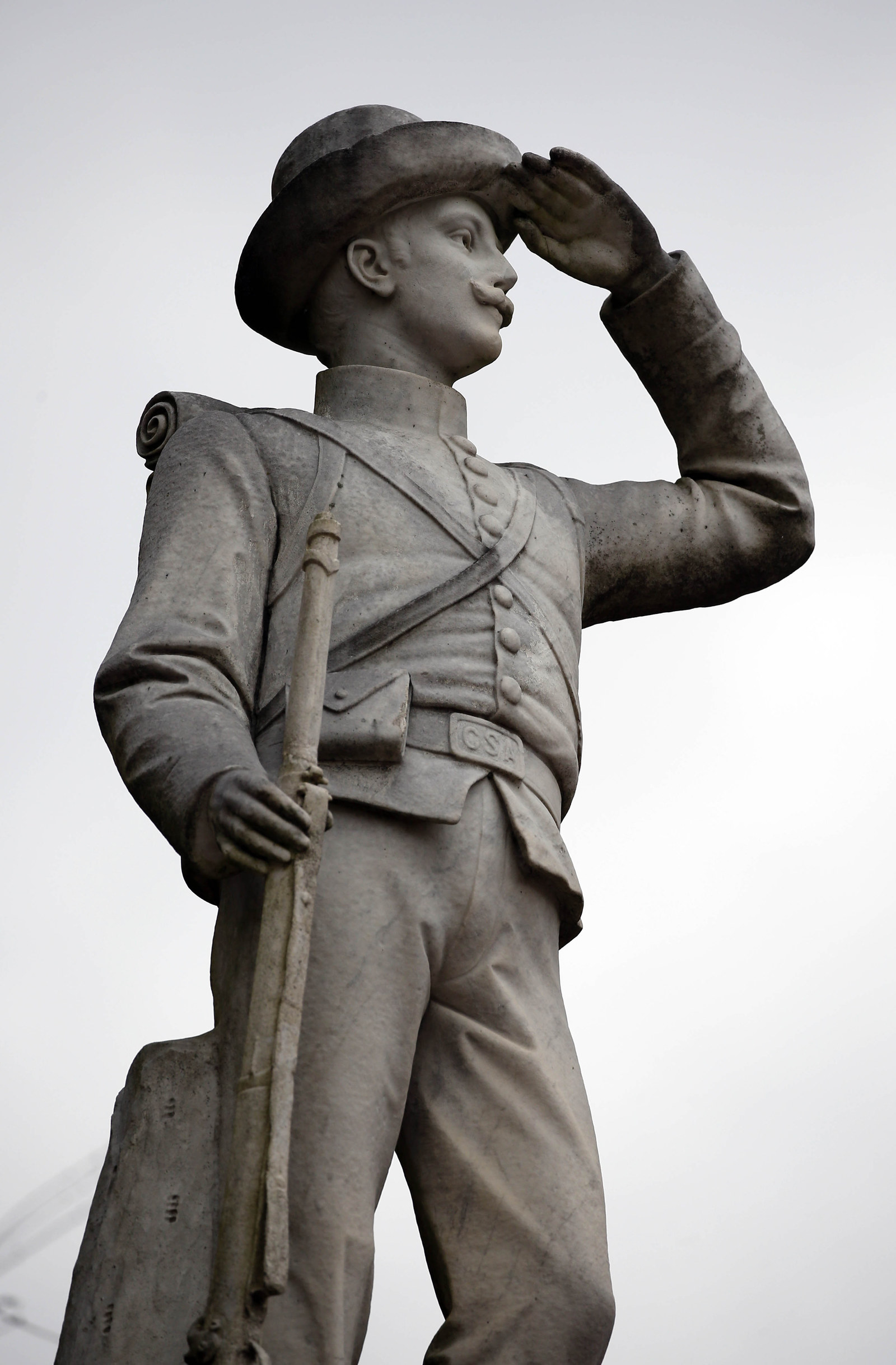 A Confederate soldier monument at the University of Mississippi in Oxford, February 2019.

However, the University of Mississippi has not taken any action against the students because the photo did not violate the school’s code of conduct and took place off campus, Rod Guajardo, a spokesperson for school, said in a statement.

While calling the students’ actions “offensive and hurtful,” the university’s interim chancellor Larry Sparks said the school had “limits on the tools available to remedy this offensive behavior.”

“Based on what the photo implies and the pleasure these men seem to take in the denigration of this commemorative sign, this image is offensive and hurtful,” Sparks said in a message to students and staff Friday.

The university learned of the photo in March after someone reported it to the Bias Incident Response team at the school, according to Sparks. The matter was referred to the university police department, which then reported the image to the FBI.

The FBI declined to investigate further because the “photo did not pose a specific threat,” Sparks said.

“The incident occurred off campus, did not rise to the level of a threat per federal authorities, and was not part of any university-affiliated event,” Sparks said in his message. “As a community of learning and a state institution, we have limits on the tools available to remedy this offensive behavior.”

The university said that it supported Kappa Alpha’s decision to suspend the three men.

“We stand ready to assist the fraternity with educational opportunities for those members and the chapter,” Guajardo said.

Last July, the DOJ reopened its investigation into Till’s 1955 murder based “upon the discovery of new information.”

Two white men, Roy Bryant and his half brother J.W. Milam, had been charged with Till’s murder, but an all-white male jury acquitted them. Both Bryant and Milam later admitted to a journalist that they had killed Till, but they were not retried and are now dead.

In response to the photo, the Emmett Till Memorial Commission said that signs to honor Till have been the targets of relentless vandalism over the years.

“Our signs and ones like them have been stolen, thrown in the river, replaced, shot, replaced again, shot again, defaced with acid and have had KKK spray painted on them,” the commission said in its statement. “The vandalism has been targeted and it has been persistent. Occasionally, the national news has picked up the story. More often, these acts have gone unnoticed and been the responsibility of our community to maintain.” 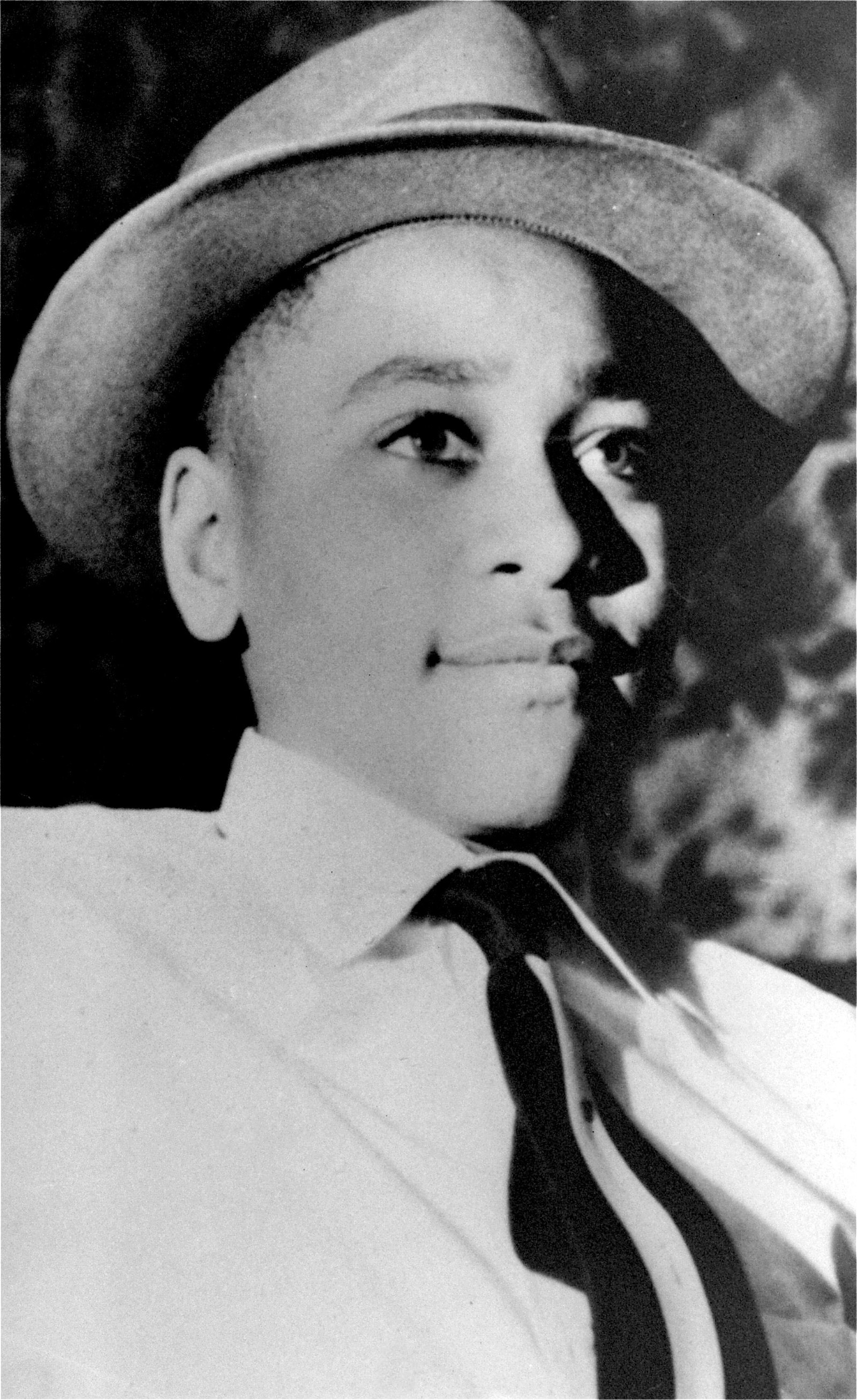 Undated portrait of Emmett Till.

The sign in Tallahatchie County, first erected in 2007, was stolen in 2008 and never found. A replacement sign was riddled with dozens of bullet holes in 2016 and is now housed in the Emmett Till Interpretive Center. In August 2018, 35 days after a third sign went up, it was defaced with four bullet holes.

Every time a pristine sign has been vandalized, it’s been “devastating,” said Patrick Weems, executive director of the Emmett Till Memorial Commission, told BuzzFeed News on Friday.

The commission has now planned to replace the most recently vandalized sign with a 500-pound steel reinforced memorial that can likely withstand bullets on Oct. 19, he added.

“We think that [this new sign] will stand up symbolically and physically to what we’re trying to accomplish,” Weems said.

He noted that the vandalism did not appear to be random, as the sign is in a secluded area down a gravel road off the highway.

“As a former [Ole Miss] student, I look forward to working with the university for a long-term partnership and commitment towards racial justice and racial equity,” Weems said.

In 2014, three Ole Miss students, including a fraternity member, placed a noose on a campus statue of the school’s first black student. They also wrapped the statute with a former Georgia state flag with the Confederate battle emblem.