Viola Smith, who played a giant 12-piece drum kit and was billed as the “fastest girl drummer in the world” — and who wrote a widely read essay during World War II advocating for big bands to hire female musicians in place of the male ones who had been drafted — died on Oct. 21 at her home in Costa Mesa, Calif. She was 107.

Her nephew Dennis confirmed her death.

Ms. Smith, who hailed from a little town in Wisconsin, grew up playing in a jazz band with her seven sisters. Her entrepreneurial father conceived of the group, the Schmitz Sisters Orchestra, and they performed at state fairs and toured the vaudeville circuit. After most of her sisters left the band, Ms. Smith started another all-female outfit, the Coquettes, which rose to modest national fame in the late 1930s.

Ms. Smith became the first female star of jazz drumming. She performed at President Harry S. Truman’s inauguration gala, and she worked with Ella Fitzgerald and Chick Webb. Her showcase tune was a jazzy arabesque called “Snake Charmer,” in which she exhibited her virtuosity in a flashy solo. 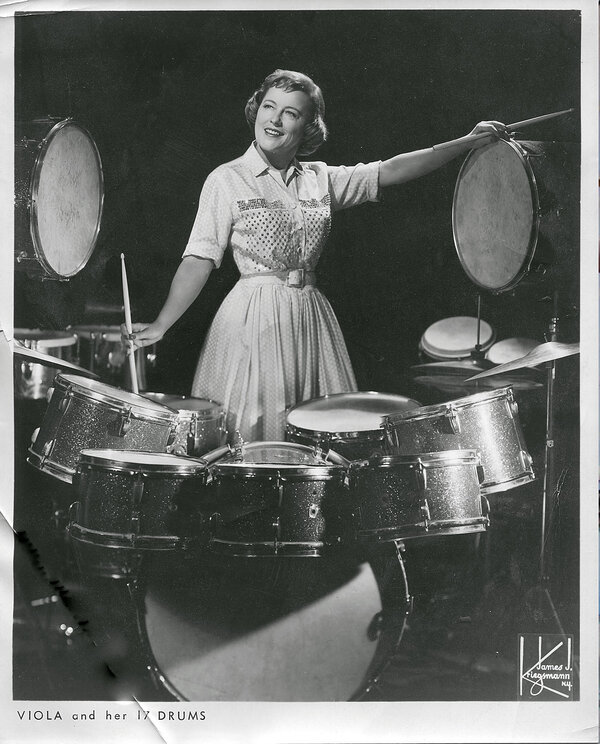 When people called her the “female Gene Krupa,” she corrected them: Krupa, she said, was the male Viola Smith.

As the ranks of predominantly male big bands thinned out during the war, Ms. Smith published an editorial in DownBeat Magazine titled “Give Girl Musicians a Break!,” urging orchestras to hire the talented female musicians eager to fill the slots of the absent players.

“Why not let the girls play in the big bands?” she wrote. “In these times of national emergency, many of the star instrumentalists of the big name bands are being drafted. Instead of replacing them with what may be mediocre talent, why not let some of the great girl musicians of the country take their places?”

“There are many girl trumpet players, girl saxophonists and girl drummers who can stand the grind of long tours and exacting one-night stands,” she continued. “The idea of girls being able to play only legitimately is a worn-out myth now.”

Viola Clara Schmitz was born in Mount Calvary, Wis., on Nov. 29, 1912. Her father, Nicholas, ran a tavern and a dance hall and played cornet professionally. Her mother, Louise (Steffes) Schmitz, was a homemaker. She grew up in a musical household with nine siblings and attended a rural schoolhouse.

When Ms. Smith was 13, her father assigned her the drums in the family band, partly because all the other instruments were spoken for. The Schmitz Sisters Orchestra toured heavily and once participated in a radio battle with an all-male big band, performing Gershwin’s “Rhapsody in Blue.”

Ms. Smith’s sisters gradually left the band to raise families or pursue other occupations, and with her remaining bandmate, Mildred, she formed a new all-female ensemble, billed as Frances Carroll (the frontwoman) and the Coquettes, which appeared on the cover of Billboard magazine and performed in a Warner Bros. musical short. Mildred eventually also got married, and Ms. Smith became the last sister standing.

The bright lights of New York, and the hot jazz coming out of the nightclubs on 52nd Street, called out to Ms. Smith, and she headed to the big city with her drumsticks.

Opportunity abounded for her in New York. She studied timpani at the Juilliard School and played with the snare drum virtuoso Billy Gladstone at Radio City Music Hall. A young Frank Sinatra chatted her up one night at a chop house. She found a studio apartment in Midtown, where she ended up living for 70 years.

She joined Phil Spitalny’s all-female Hour of Charm big band and stayed with the group for over a decade, appearing with them in the Abbott and Costello comedy “Here Come the Co-eds.” Ms. Smith also made several appearances on Ed Sullivan’s popular variety show and signed endorsement deals with Ludwig Drums and the Zildjian cymbal company.

By the 1950s, the big-band era was coming to an end. A few years after performing on Broadway as a member of the Kit Kat Band in the original 1966 production of “Cabaret,” she retired. She spent the following years getting good at bridge and enjoying the wonders of a rent-regulated New York apartment.

When Ms. Smith discovered much later that she was being hailed as a female pioneer of drumming, the news surprised her.

“It’s all amazing to me what I see now on the internet,” she told Tom Tom, a drumming magazine, in 2013. “Everything comes as a great surprise. I’m very thankful that I’m accepted as a girl drummer because, one time, there was no such thing.”

In 2012, Ms. Smith moved to Southern California, where she lived on a Christian commune in Costa Mesa, largely composed of older women, called the Piecemakers. The origins of the group, which operates a country store that sells homemade quilts and crafts, date to the 1960s.

Earlier this year, the writer Emma Starer Gross visited Costa Mesa to interview Ms. Smith for The LAnd Magazine. Musing on her longevity, Ms. Smith said, “Maybe it’s the drums that have kept me spry, or the wine, or going to the casino.”

The article described a trip Ms. Smith had taken a few years earlier to a Guitar Center with some Piecemaker friends to pick up musical equipment. A young woman helped them out, paying little notice to the petite centenarian. As it happened, Tom Tom magazine had recently run a piece about Ms. Smith, and that very issue was sitting on the shop’s counter.

When the young employee started flipping through the magazine, and one of Ms. Smith’s friends casually mentioned the article, she quickly became star-struck.

“You’re Viola Smith?” she said. “Every woman drummer knows who you are.”