WOODSTOCK: THREE DAYS THAT DEFINED A GENERATION (2019) 9 p.m. on PBS (check local listings.) The Woodstock Music festival turns 50 next week. Although the anniversary concert has been canceled, both would-be attendees and those who planned to stay home can experience the original vicariously through the subjects in this documentary. Unlike Michael Wadleigh’s 1970 concert film — the definitive movie about Woodstock — this film by Barak Goodman and Jamila Ephron centers on the 400,000 people who descended on a dairy farm in upstate New York in the name of “peace and love,” despite poor weather and a lack of infrastructure (including plumbing). Writing in his review for The New York Times, Glenn Kenny said the movie “uses the perspective of nearly 50 years’ hindsight to demonstrate anew how the festival was both a mess and a miracle, and implicitly argues that it was a good deal more miracle than mess.”

THE 100 9 p.m. on CW. The Season 6 finale of this post-apocalyptic drama series sees the believers and nonbelievers go head-to-head in the lunar city-state of Sanctum, while the mystery of the anomaly grows ever more elusive. Jason Rothenberg, the show’s creator, announced on Sunday that the seventh season will be the last. And, coincidentally, the series finale will be the 100th episode.

BLOOD & TREASURE 10 p.m. on CBS. Last week, Danny (Matt Barr) and Lexi (Sofia Pernas) — the team hunting down a terrorist in this espionage series — learned the dirty truth about Reece (John Larroquette). But whether that will help them stop Farouk (Oded Fehr) before he puts his plan into action in this season finale remains to be seen. One thing is for sure: With the show’s renewal for a second season, viewers can expect the intrigues to continue. . 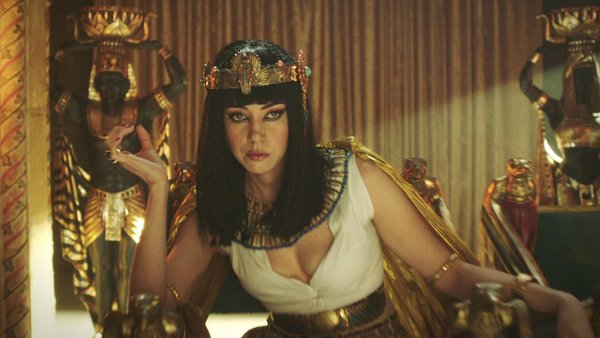 DRUNK HISTORY 10 p.m. on Comedy Central. In this comedy sketch show’s sixth season finale, the comic Jackie Johnson drunkenly narrates the story of Mary Mallon (Betsy Sodaro), also known as Typhoid Mary, an Irish cook who worked in New York and caused multiple outbreaks of typhoid fever in the early 1900s. In the second half of the show, the narrator, the inebriated actress Lyric Lewis, recounts the life of Arsinoe IV, Cleopatra’s younger sister, who briefly tasted power before her tragic end.

PLUS ONE (2019) Stream on Hulu. Wedding season is upon us, which makes this indie romance a fitting watch. Maya Erskine (“PEN15”) and Jack Quaid (whose mother is the romantic-comedy god Meg Ryan) play two single friends who agree to be each other’s dates to 10 weddings over a single summer. She’s recovering from a nasty breakup; he’s obsessed with finding the perfect match. It’s clear from the outset that they will inevitably land in each other’s arms. Yet despite the predictability, the film thrives on the stars’ palpable chemistry and Erskine’s comedic talent.