AMSTERDAM — When the Dutch artist Renzo Martens presented his film “Episode III: Enjoy Poverty” at Tate Modern in London in 2010, he couldn’t help but notice the many Unilever logos painted across the museum’s white walls.

Unilever, an Anglo-Dutch company that owns Axe, Dove, Vaseline and other household brands, sponsors the Unilever Series, in which an artist is commissioned to make a site-specific work for the Turbine Hall at Tate Modern.

“Unilever, Unilever, the Unilever series,” Martens says in his latest documentary, “White Cube,” recalling that moment. “The greatest, most famous artists of the world, financed by Unilever.”

Unilever was once nearly ubiquitous, too, in the region of the Democratic Republic of Congo where Martens has worked since 2004. “Episode III: Enjoy Poverty,” from 2008, documented dire conditions on the country’s palm oil plantations, where workers earned less than $1 a day. In “White Cube,” he follows up by visiting former Unilever-owned plantations in the villages of Boteka and Lusanga. (Unilever sold the last of its plantations in Congo in 2009.)

To Martens, Unilever represents a system of global exploitation, in which Western companies extract resources from poorer countries, generate income, and then use some of that wealth to finance high culture elsewhere. Some of the artists they support, he added, also make works focused on inequality, but the benefits of those works rarely go to those in need.

“People on plantations are desperately poor, and they work for the global community,” Martens said in a recent interview in Amsterdam. “They even work, indirectly, for exhibitions in the Tate Modern. Art is sterile if it proclaims to be about inequality but doesn’t bring benefits to those people.”

“I wanted to make sure that a critique of inequality would, at least partially, and materially, redress that inequality,” he added. 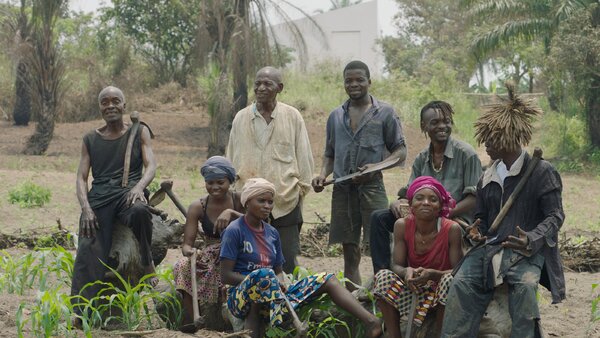 Martens’s art career took off after “Episode III: Enjoy Poverty,” and he said that he decided at that time to use his new position of influence in the art world to attempt a “reverse gentrification project.” The aim was to bring art directly to the plantations, to stimulate economic development there. “White Cube,” a 77-minute film that is screening in art centers across the world this month, including in Eindhoven, the Netherlands; Kinshasa, Congo; Lagos, Nigeria; and Tokyo, documents that process. The movie will also screen in the Copenhagen Documentary Festival, which runs April 21 through May 2.

“White Cube” is both a film and a record of a project seeking to transform a community through art. By linking the wealthy international art world directly to an impoverished African plantation, Martens demonstrates how fortunes across the globe are intertwined. Central to the endeavor are issues of restitution, repatriation and perhaps even reparations. The underlying question that “White Cube” poses is: What does art owe to the communities from which it has extracted so much?

Such questions are particularly relevant today as governments have vowed to identify art looted from the African continent in their public museums. President Emmanuel Macron of France pledged in 2017 to begin a large-scale repatriation. He commissioned a study, which found that 90 percent to 95 percent of African art is held by museums outside of Africa. An advisory committee to the Dutch government last year also recommended that the Netherlands should also return art to its former colonies.

“What needs to be restituted is not just old objects — for sure that needs to happen — but it’s also about the infrastructure,” Martens said. “Where does art take place? Where is art allowed to attract capital, visibility, and legitimacy for people?”

“White Cube” begins in 2012, when Martens attempts to bring art to an operational plantation in Boteka. It quickly goes wrong, and he is chased out of the community under threats made by a Congolese company that took over running the plantation after Unilever pulled out.

He is more successful when he tries again in Lusanga, a village once known as Leverville, after William Lever, founder of a company that later became Unilever. Lever established one of his first Congolese plantations there, in 1911. The Leverville operation closed down in the 1990s, leaving behind buildings that became derelict and soil that had become unworkable after a century of intensive single-crop farming.

In the film, Martens says that Unilever obtained its plantations in Congo through a land grant from Belgian colonial administrators in the early 20th century, reaped the profits and depleted the soil, then sold the land and abandoned the enterprise to contractors.

Unilever declined to comment on Martens’s film or on the accusations of exploitation he makes against the company. Marlous den Bieman, a Unilever spokeswoman, said in an email that, “Unilever has had no involvement in the D.R.C. plantations since selling them well over 10 years ago.”

As part of “White Cube,” former agricultural workers volunteered to be part of an art studio producing sculptures, which they cast in chocolate — a rarely tasted delicacy for the workers, despite the fact that they used to produce the palm oil, a key ingredient — and then sold at an art gallery in New York. The local sculptors formed a cooperative, the Congolese Plantation Workers Art League, and shared the proceeds of the sales. So far, the “White Cube” project has generated $400,000 for the local community, said René Ngongo, the Congolese president of the cooperative; it has used half of that to buy more land.

As the centerpiece of the project in Lusanga, Martens has enlisted the pro bono assistance of OMA, the Dutch architect Rem Koolhaas’s firm, to design an art museum — the “White Cube” of the film’s title. Behind the scenes, he negotiated with a Dutch philanthropist to pay for it, and worked with the Congolese architect Arséne Ijambo, who adapted the design and hired local construction workers. In total, about $250,000 of private investment was raised to build the museum, art studios, a conference center and lodgings, according to Martens.

In a recent video interview from Congo, Cedart Tamasala, one of the locals who makes the chocolate sculptures, said that he had aspired to be an artist from a young age but had been forced to drop out of art school in Kinshasa for lack of funds and went to work on his uncle’s family farm for no pay. The “White Cube” project has given him an income, stability and a sense of autonomy, he said.

“One of the important aspects is that we have our space now; we have our land and we can decide what we want to do with it,” he noted.

“The film, like the white cube, is a tool,” Tamasala added. “It tells what we are doing, and it makes it visible, and it also connects us to the world, to other plantations, to other artists, and it gives us access to things we didn’t have access to before.”

The museum has been closed during the coronavirus pandemic, but there are plans to exhibit local artists’ work there, including, ultimately, art returned from European museums.

“My most ardent wish for the Lusanga museum is that it be a support for the repatriation of our hijacked art,” Jean-François Mombia, a human-rights activist who has worked with Martens since 2005, said in an email exchange, “but also a support that will allow us to express ourselves through art. We would like the Lusanga museum to be a base for the artistic blossoming of museums throughout Congo.”

Tamasala said that bringing back art stolen from Congo in colonial times would only amount to a small compensation for all that had been plundered from his community. “Apart from the artwork that has been taken away from here, there were diamonds, gold, palm oil, so many things,” he said. “If we need to restitute something, we need to restitute all of that, not just the art.”

With that in mind, are there limitations to what Martens feels he can do for a former plantation town?

Art was “a magic wand,” he added, which could “create all these positive side effects. I think it should happen on a plantation, and not exclusively in New York or Amsterdam, or Dubai or Cape Town.”