The last solo number on “All the Girls,” the new duo album from the sopranos Rebecca Luker and Sally Wilfert, is a piece of specialty material for Luker called “Not Funny.”

In the song, by Michael Heitzman and Ilene Reid, Luker twits her image as a “spoonful of saccharine” but also punctures it. The gist is that lower-voiced belters get all the laugh lines, possibly because it’s so “hard to land a joke up here” — in the soprano stratosphere. Playing Laurey in “Oklahoma!,” Luker complains, “I’ll sing my ass off, but Ado Annie steals the show.” Then she disproves it by ripping a thrilling high C.

Luker was 58 when she last performed the number live, during a concert with Wilfert at Merkin Hall in Manhattan. That was in September 2019, 15 months before she died of amyotrophic lateral sclerosis, better known as A.L.S. or Lou Gehrig’s disease.

As yet undiagnosed that night, she had some trouble climbing onto the de rigueur stool, but she sounded as beautiful as ever, clearly enjoying the chance to sing songs about sisterhood with someone who was in fact as close as a sister. They met, Wilfert recalls, at a reading in 2005; when Wilfert said “I’m going to the bathroom,” Luker said, “I’m going too” and they sat “in adjacent johns,” yakking. 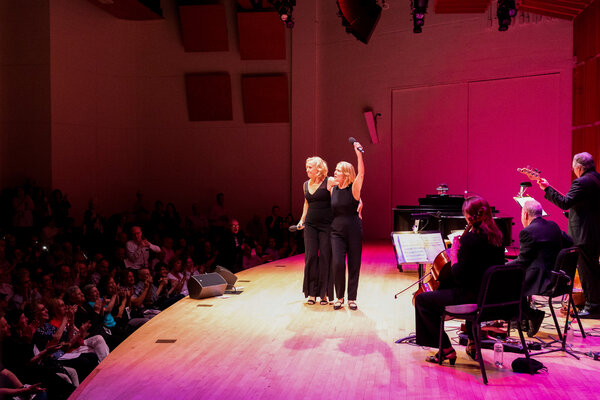 Despite Luker’s unshakable ingénue rep — built on Broadway roles including Lily in “The Secret Garden” (1991), Magnolia in “Showboat” (1994), Maria in “The Sound of Music” (1998) and Marian in “The Music Man” (2000) — she was by the time of the Merkin Hall concert a sophisticated Broadway veteran and a complex actor, even taking over the crushing role of Helen in “Fun Home” in 2016. Though her voice remained infallibly lustrous, with classical size and control yet zero operatic fussiness, it was her intelligence in deploying it that kept her in demand well past the industry sell-by date for most stars of that repertoire.

Nor did her intelligence let up as “All the Girls” was put together. Her husband, the Broadway performer Danny Burstein, says her notes for the producers were “meticulous” despite her suffering. Tommy Krasker, the head of PS Classics, her longtime label, says she listened to mixes with the “clarity of mind and healthy self-criticism” she’d always displayed in their 20 years of working together. When she thought a joke in “Not Funny” wasn’t landing as well as it might, she asked that the piano part, performed by her music director, Joseph Thalken, be rerecorded. The joke now lands like a gymnast after a handspring.

What’s remarkable about this is not only that Luker’s health was quickly deteriorating, but that such a fond, full-smile, no-dud album got produced at all, let alone in the middle of a pandemic. How it happened is the kind of story that Luker, whose death came just two days before the digital release of “All the Girls” on Christmas — and in whose honor an A.L.S. fund-raising concert entitled “Becca” will be streamed on Tuesday — would have loved for its unlikeliness and bittersweet ending.

Recording dates had been set for March 2020. The lockdown delayed that plan, but by the time PS Classics could safely book a studio again, in August, Luker could no longer sing. Her final performances, in “An Evening With Sheldon Harnick … and Friends” at the York Theater in March and in a three-song concert streamed from home in June, had been achieved with mounting difficulty as she gripped the arms on her wheelchair to make the notes emerge. By autumn she could not make them at all.

Though it might have been sensible to abandon the album at that point, Krasker and the producer Bart Migal decided to try an experiment, attempting what Krasker calls “the first studio album made without ever stepping in the studio.” Thalken, the music director, was able to weave new orchestrations around surprisingly good recordings of the Merkin Hall rehearsal and concert; musicians recorded the new parts in their homes; the producers mixed the result; and by some miracle what emerged sounded pristine.

But not just pristine: rich and compelling. Though Luker and Wilfert have distinctive voices when singing separately, they can sound nearly identical when singing together. (They have the same voice teacher.) Listening to playbacks, even they could not always figure out who was who. In duets like “You Are My Best Friend” (the charming opener) and “Isn’t It Better?” (a Kander and Ebb torch song here turned into an anthem of sisterly support) something sublime happens as the two voices, blending so closely, seem to multiply even as they merge.

That effect is at its height in the album’s finale, an unexpected pairing of the Patty Griffin song “Be Careful” with “Dear Theodosia,” a number sung by Aaron Burr to his infant daughter in “Hamilton.” As performed by Luker and Wilfert, “Theodosia” feels like a promise from today’s women to their spiritual daughters to leave them a safer world. “Be Careful,” whose lyric provides “All the Girls” with its title, is wrenchingly ambivalent, celebrating women’s strength but also their fragility — and ending, in this arrangement, on a daringly unresolved harmony.

Which feels only right. Strong as the album is — five poetry settings by Thalken are especially lovely — it inevitably comes wrapped in a shroud of loss. I don’t mean just the loss of Luker herself. Her kind of voice (and Wilfert’s) is gradually being squeezed out of musical theater, as classically trained sopranos give way to the kind described so saucily in “Not Funny,” which Kelli O’Hara will sing at Tuesday’s concert. Most new works are written for belters.

The greater loss is of course personal. Many of us, mourning a loved one, are grateful for any scrap of their voice that might be preserved in a phone message or video. That’s not Burstein’s situation. He has lots of Luker’s albums to listen to. The problem is that though they are comforting they are also devastating — especially, on “All the Girls,” that final medley, with its aching Griffin lyric: “Be careful how you bend me/Be careful how you send me/Be careful how you end me.”

In any case, the albums are what Luker gave us, not him. More than her public voice, what Burstein misses most after 20 years of marriage is her private voice: the one he heard in car rides spent harmonizing together to ’70s hits on the radio.

By comparison, the rest of us are lucky. Listening to “All the Girls,” in some ways Luker’s funniest and wisest album, we get to keep her singing next to us forever.

Rebecca Luker and Sally Wilfert
“All the Girls”
(PS Classics)

Becca: A Night of Stories and Song in Memory of Rebecca Luker
May 4 at 7:30 p.m.
momenthouse.com/targetals