Minister for Women Marise Payne has refused to endorse the controversial Liberal candidate for Warringah, amid an escalating internal battle in the party to disendorse Katherine Deves over her controversial remarks about transgender children and LGBTQ issues.

Prime Minister Scott Morrison and former PM Tony Abbott have backed Deves and said she is standing up for women’s rights in her campaign to not allow transgender women to compete in female sports. 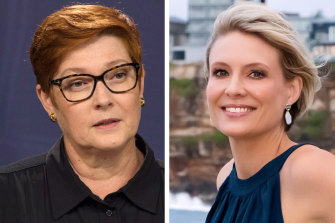 But NSW Treasurer Matt Kean, said on Friday night that there should be “no place for bigotry in a mainstream political party, let alone anywhere” and other moderate Liberals have warned the controversy could cost votes in other seats.

Payne, who is also the Foreign Minister, was asked repeatedly on ABC’s Insiders program on Sunday if she personally, as a senior member of the NSW branch of the Liberal Party, thought Deves should be dropped as a Liberal candidate but declined to offer a definitive opinion.

“Ultimately that is a matter for the Liberal Party here in NSW,” Payne said.

“I don’t share Ms Deves’ comments that she has made, but importantly she has apologised and withdrawn those views and as the prime minister said yesterday, in public life, we do have to be very careful about the way we express our opinions.

“Ms Deves is the Liberal candidate and that is the approach we are taking.”

Deves was selected as the Warringah candidate by a committee of three – Morrison, NSW Premier Dominic Perrottet and former party president Chris McDiven – on the eve of the election, amid a legal fight with the NSW branch over preselections.

She is battling incumbent independent Zali Steggall who won the formerly blue-ribbon seat from Abbott in 2019.

Deves runs a lobby group, Save Women’s Sport, which opposes the inclusion of trans women in women’s sport. She has tweeted that “half of all males with trans identities are sex offenders” – a claim that has been refuted – and on her now-deleted Twitter account she called trans children “surgically mutilated and sterilised” and said she was triggered by the rainbow flag.

“I don’t agree with the remarks she made, I’ve made that explicitly clear. I do believe there needs to be a discussion in relation to the participation of transgender [women] in sport,” she said.

Kean, a senior member in the NSW branch, said “the Liberal Party should be about building a better country for everyone not dividing people based on their identity”.

Morrison said on Saturday ”I don’t share Matt’s view, I share Tony Abbott’s view, I’m not joining that pile on.”

“The comments that Katherine has made obviously were insensitive, and she’s admitted that,” he said.

“This is a woman standing up for women and girls in sport. That is the primary issue she has raised. There are ways she has expressed [that] in the past that she no longer feels comfortable with.”

Financial Services and Superannuation Minister Jane Hume said in an interview with Sky News on Sunday that Deves had used “inappropriate language” but her commitment to the women’s sport cause was “admirable” and she had done the right thing by withdrawing her remarks.

“She is a very passionate woman. She is very committed to ensuring that women and girls can compete in sport on an equal and fair basis.

“The comments that she made on social media have gone, they have been withdrawn, she agrees that they were wrong. But her commitment to the cause remains and I think that that is admirable,” Hume said.

On Insiders, Payne backed Morrison’s refusal to commit to establishing a federal corruption watchdog, something the Labor Party on Saturday promised to establish by the end of the year.

Morrison pledged ahead of the 2019 election to create a Commonwealth Integrity Commission and last year released a draft law for public comment. Labor proposed amendments and the laws were shelved.

It was widely criticised for lacking teeth and being overly secretive and a bill was never tabled for a debate.

Morrison reiterated his position on Saturday that he would not negotiate with Labor over the legislation.

“The promise is to proceed with that legislation because that is our commitment. It is what the prime minister said yesterday, it is clearly there for all to see,” Payne said.

Jacqueline Maley cuts through the noise of the federal election campaign with news, views and expert analysis. Sign up to our Australia Votes 2022 newsletter here.