A mum has been forced to give up on her dream of having three children because she is too scared of ‘leaving her baby without a mummy’ – after pregnancy sickness left her on the verge of having a heart attack.

Imogen Darkes, 27, from Cullompton, Devon, decided her son Harry Darkes, 16 months, will be an only child after debilitating morning sickness made her fear for her life.

During her pregnancy, Imogen was vomiting up to 30 times a day from just two weeks pregnant until Harry was born and almost fell into a coma, being too weak to keep down food or water and being bed-bound for three months.

At nine weeks pregnant, her husband Lee Darkes, 40, became so worried for the well-being of Imogen and their unborn baby that he called 999 and she had to be rushed to hospital.

Paramedics discovered Imogen’s blood sugar and potassium levels were so low from constant vomiting that she would have slipped into a coma or suffered a fatal heart attack if Lee hadn’t acted when he did. 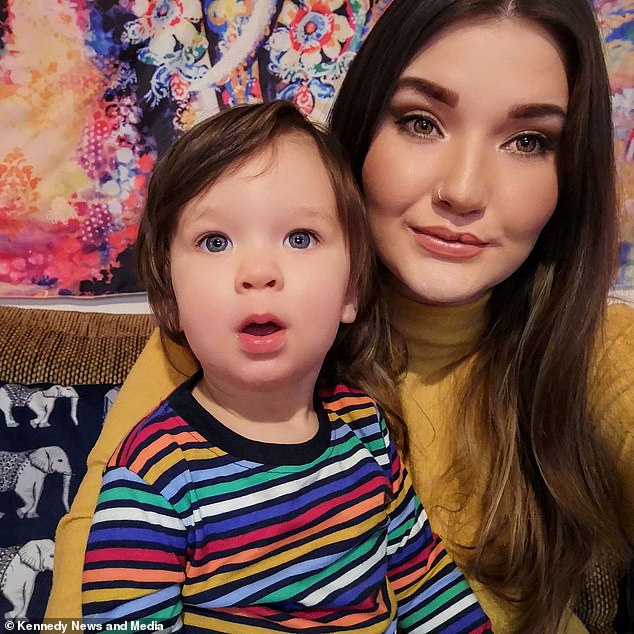 Imogen Darkes, 27, from Cullompton, Devon, decided her son Harry Darkes, 16 months, will be an only child after ‘debilitating’ morning sickness made her fear for her life (pictured with Harry now)

After being kept overnight on a drip and a monitor to make sure her baby was okay, Imogen was diagnosed with hyperemesis gravidarum (HG). HG is a chronic pregnancy complication that causes excessive nausea and vomiting and affects around two per cent of pregnant women.

Doctors also told Imogen that when a mum-to-be suffers from HG in one pregnancy, she is very likely to get it again in all future pregnancies.

Full-time mum Imogen and Lee, a police custody officer, had always dreamed of having three children and longed to see Harry grow up with siblings to play with.

But the couple has realised the risks of trying for a little brother or sister for Harry are too high as HG could rob the tot of his mum. 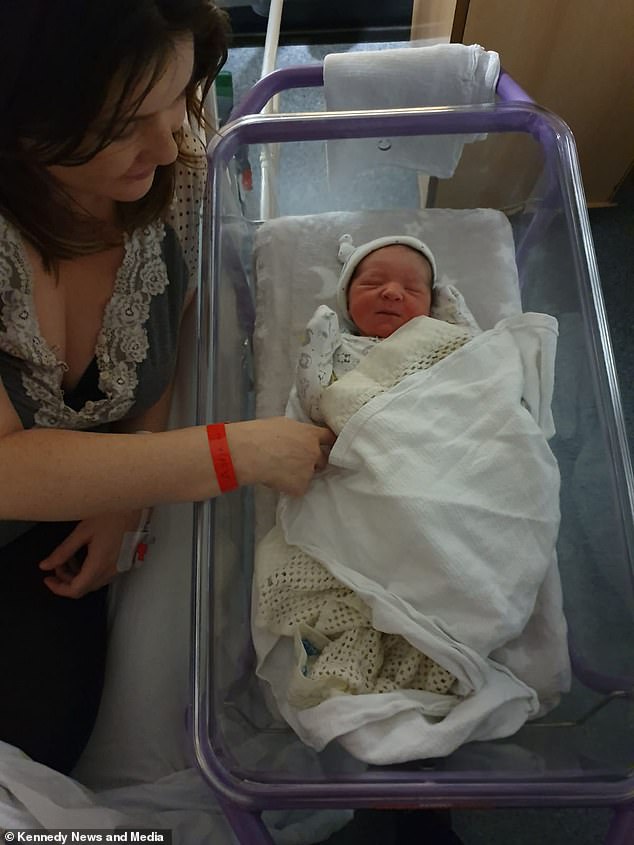 Imogen and Harry shortly after she’d give birth. The mother-of-tone has had to give up on the dream of having siblings for Harry due to her complicated pregnancy 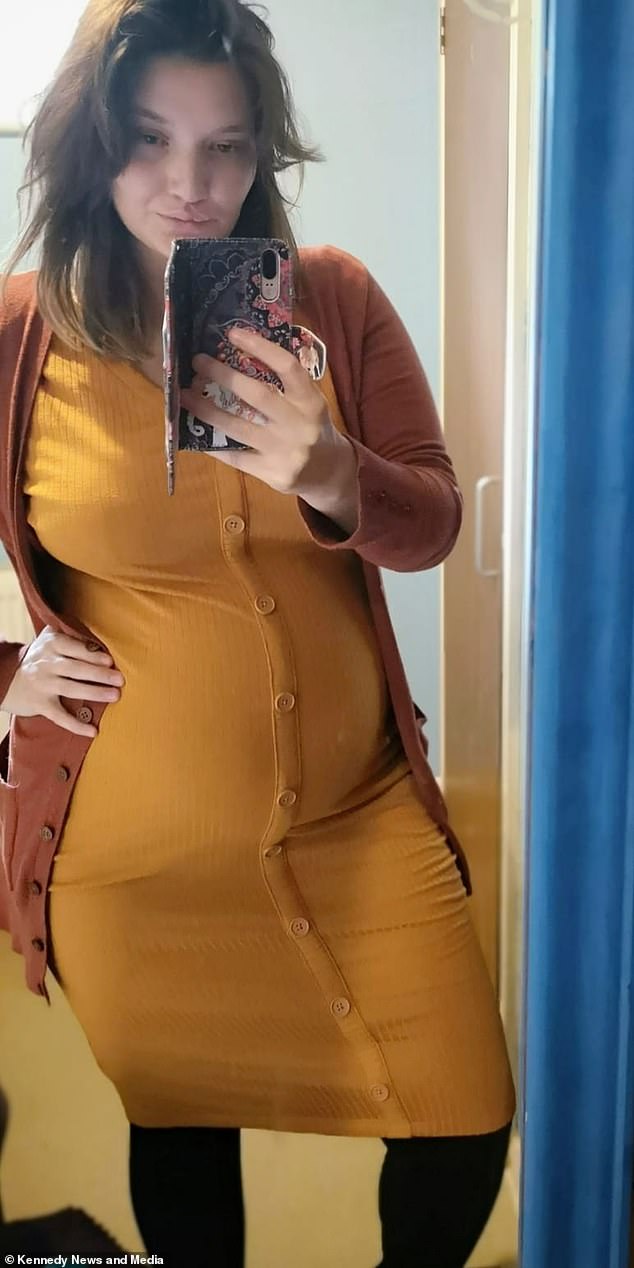 Her morning sickness was so bad, Imogen couldn’t keep food or drink down, which made her so weak, she was bed-bound for three months during her pregnancy and barely had any strength

Imogen said: ‘I know I will probably never have another baby and I often get very upset about that.

‘I know we are so blessed to have Harry. He is wonderful and all the sickness was so worth it to have him.

‘But I desperately wanted three children. Me and my husband both wanted more children and a bigger family so we both get a bit sad.

‘I feel sad for Harry too because I would love for him to have siblings. I never imagined having an only child. 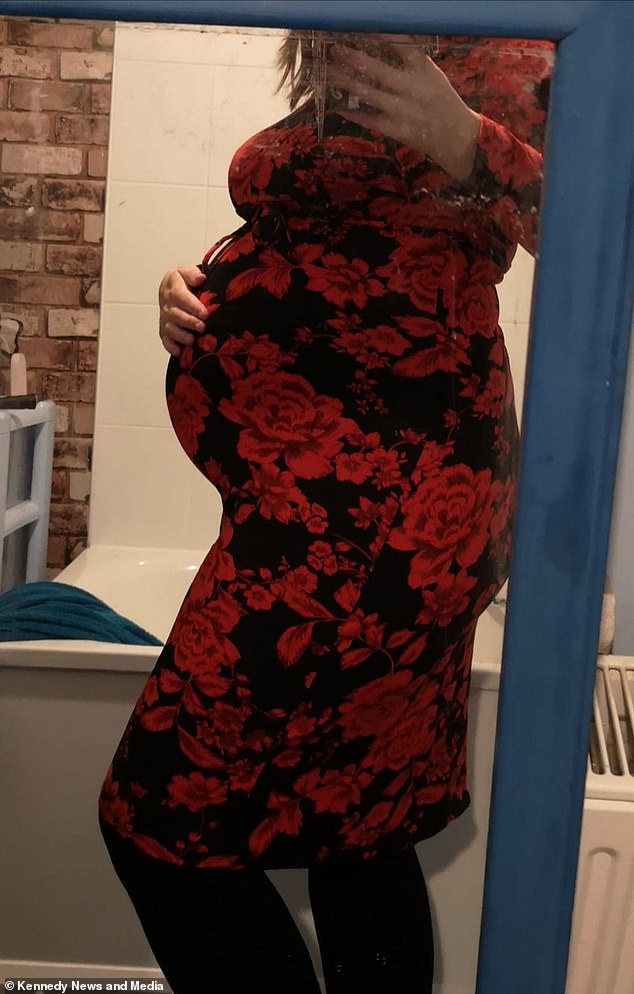 The mother-of-one’s baby bump during her pregnancy. Imogen said she was sad she’ll never be able to have another child due to her condition 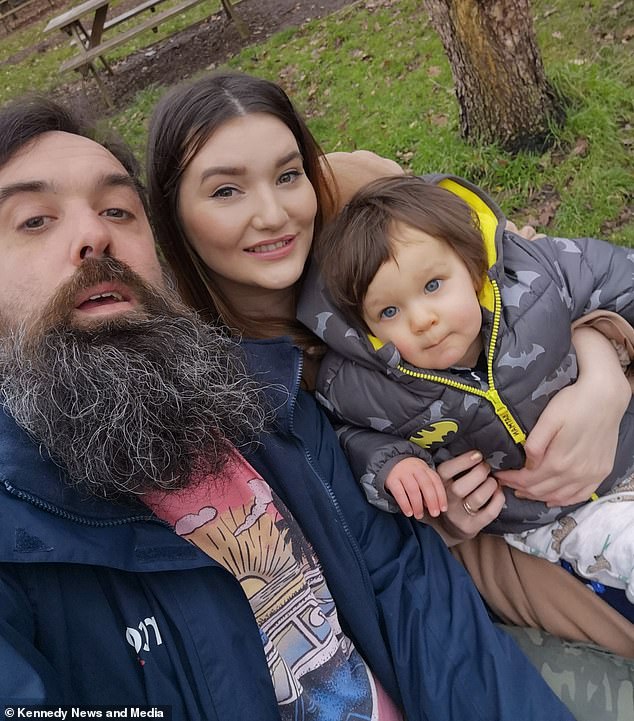 Husband Lee, 40, got so worried for Imogen’s well-being three months into her pregnancy that he called 999 so she could be rushed to hospital (pictured now with Harry) 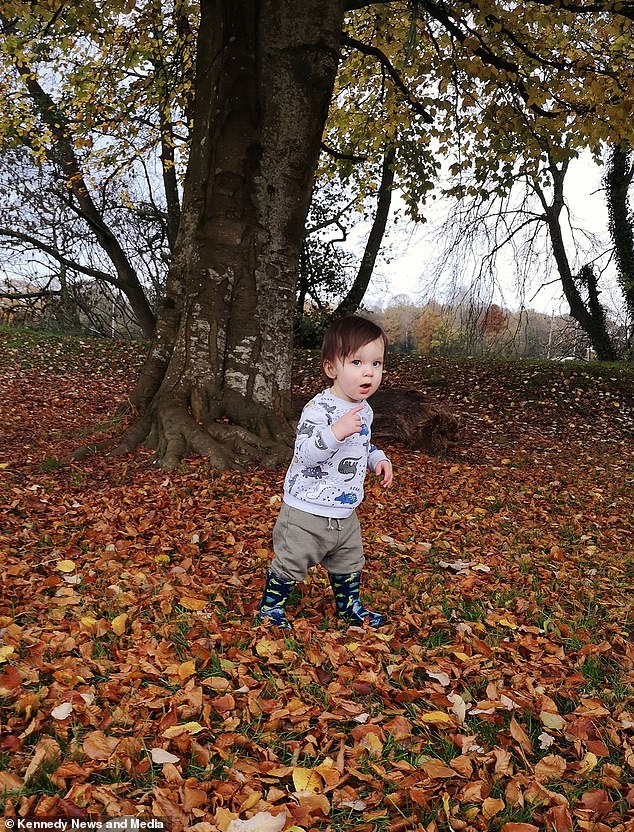 Harry now. Imogen said she was a bit sad for her son that he won’t have siblings to play wirth as he grows up

‘Apart from the fact I can’t imagine trying to look after Harry while going through another HG pregnancy there’s also the fact that I almost lost my life.

‘The idea of Harry not having a mummy, it just isn’t worth the risk. I don’t think I would have survived my last pregnancy if it wasn’t for Lee. My husband is a pretty special guy and I’m very, very lucky I had him there.

‘He’s the one who called the ambulance, I had told him I would just sleep it off.

‘But when the paramedics got there, they told us that if I had gone to sleep I might have never woken back up.

‘I think at first, the paramedics thought I was being a bit dramatic and it was just morning sickness. 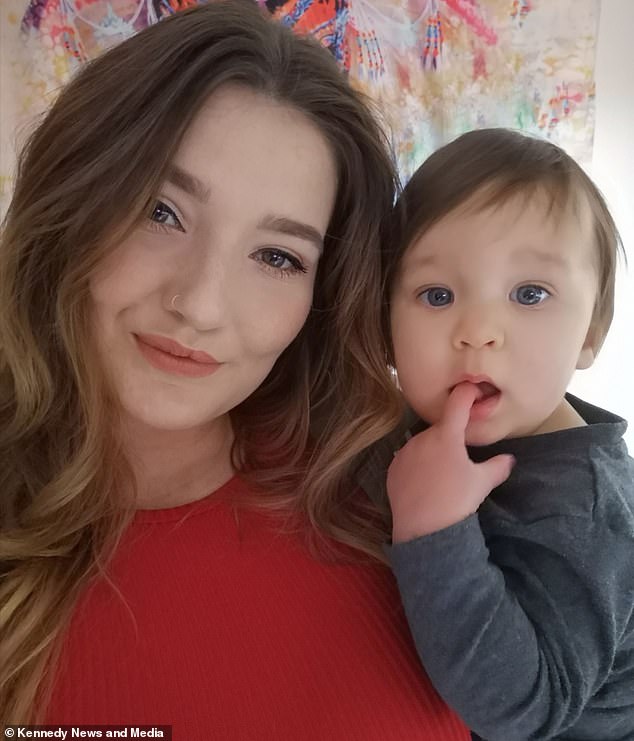 Imogen and Harry. The mother-of-one revealed paramedics told her she could have died if her husband Lee hadn’t called 999 when he did, she might have never woken up 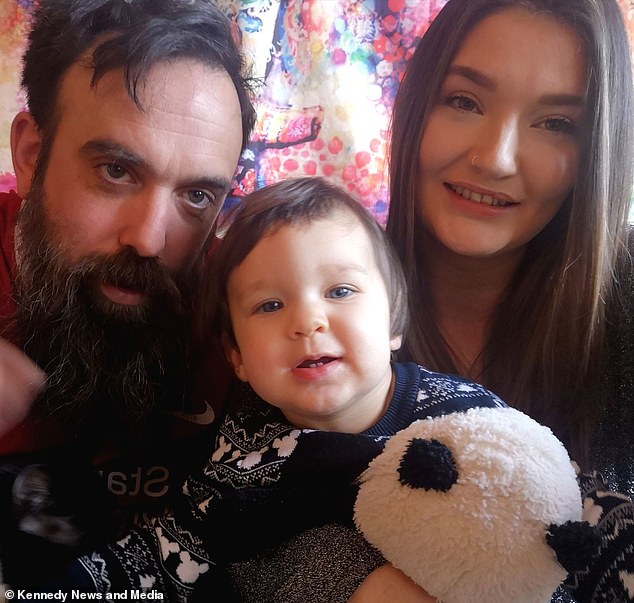 The happy family now. Imogen revealed her pregnancy kick-started at only two weeks in because that’s when her Hyperemesis Gravidarum kicked in then

‘But when they saw how low my blood sugar at potassium levels were they were horrified. They told me I could have gone into a coma or had a heart attack. It was really scary.’

WHAT IS HYPEREMESIS GRAVIDARUM?

It is much worse than the normal nausea and vomiting of pregnancy. –

The couple discovered they were expecting Harry much earlier than most parents-to-be as Imogen’s HG kicked in when she was two weeks pregnant, prompting her to take a test.

But the medication did little to ease Imogen’s nausea and vomiting which were not only caused by consuming foods or liquids but also all smells, pleasant or not.

Stuck without a cure, Imogen’s only solution became locking herself away in her bedroom to avoid as many triggers of her HG as possible.

This made Imogen’s pregnancy an incredibly lonely time because even Lee could only come into the room to empty her sick bowl and bring her water.

If Lee stayed too long or got too close while caring for Imogen it would make her sick because even the smell of another person was too much. Imogen, who also had to give up her job in hospitality management, said:

‘Honestly, it was very depressing and isolating.

‘I was just locked in the bedroom all day, it was really lonely. Lee would come in to change my sick bowl and that was the only social contact I had. 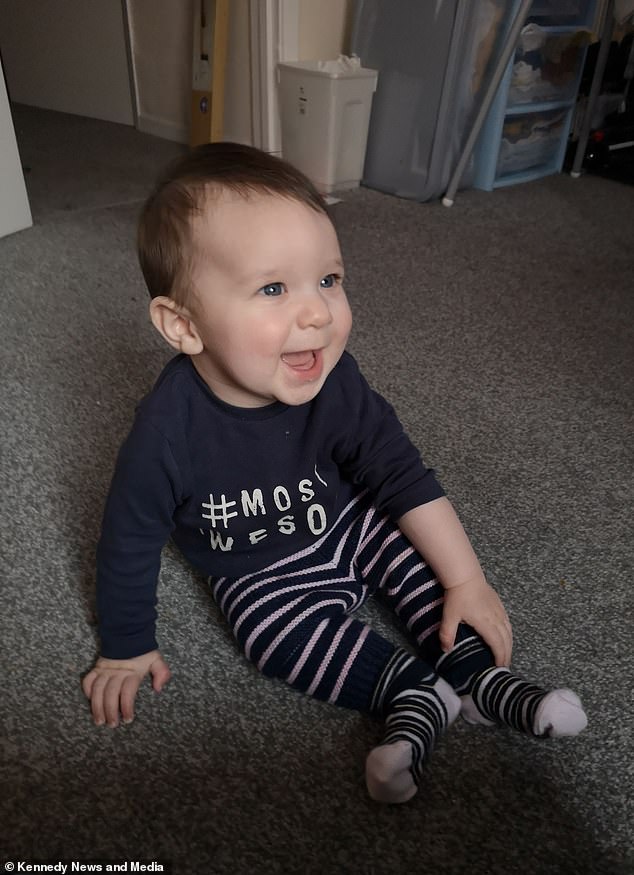 Harry at home. Imogen said her morning sickness was ‘isolating’ as she couldn’t bear any smell and couldn’t bear to be around her husband either 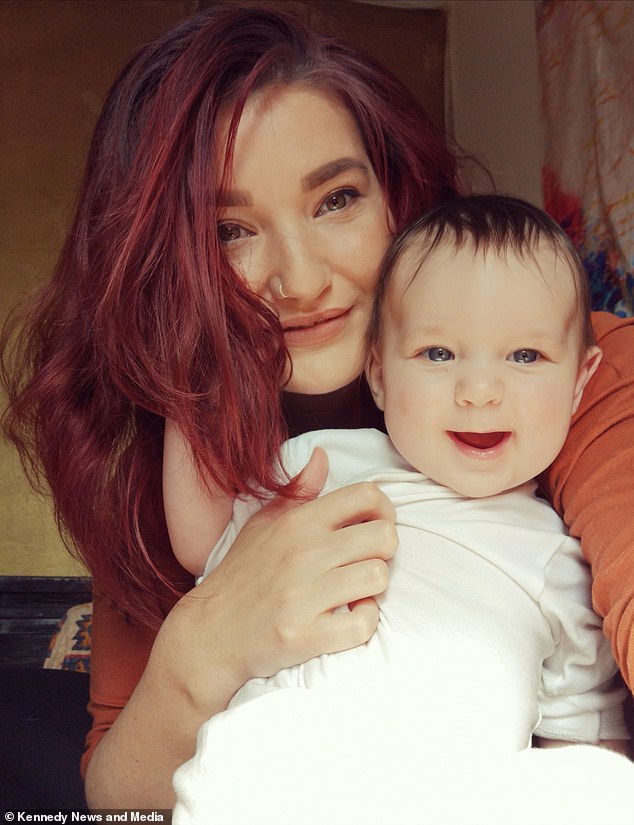 Imogen and Harry. The mother-of-one said her experience of pregnancy was very different from the glowy pictures

‘It wasn’t just hard on me, it was hard on Lee too. He’s a strong guy but even he found it really tough and trying.

‘I was throwing up about 30 times a day. I couldn’t eat anything without being sick so the midwives and doctors kept telling me to just drink water but even that came back up.

‘I was so weak and my energy levels were so low that I was completely bed bound for three months. I couldn’t even get up to shower.

‘It was so debilitating. It definitely wasn’t the glowy picture people paint of pregnancy. 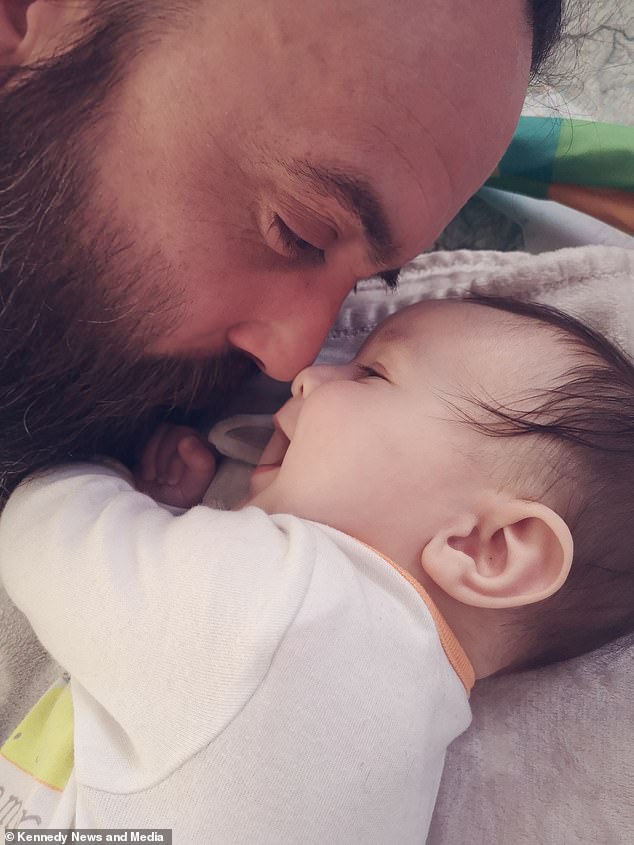 Lee and Harry. Imogen was left throwing up 30 times a day and grew afraid Harry wasn’t getting the nutrients he needed but he grew perfectly

As well as the upset and isolation caused by her condition, Imogen was also constantly terrified that her unborn baby wasn’t getting enough nutrients to thrive.

But Harry kept growing perfectly throughout his mum’s pregnancy to be born at a healthy 7lbs 5oz on November 21 2019.

And the moment her little boy came into the world, Imogen’s sickness subsided for the first time in nine months. 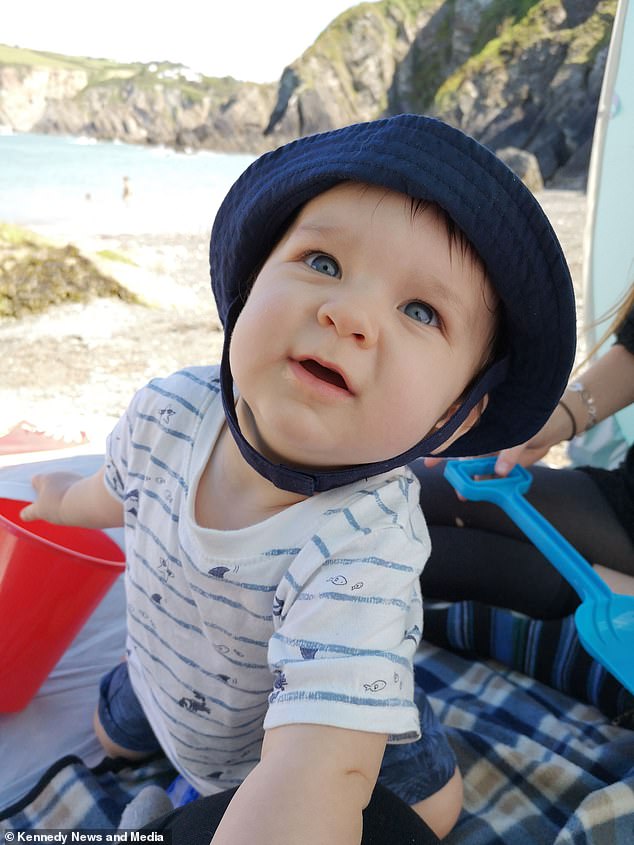 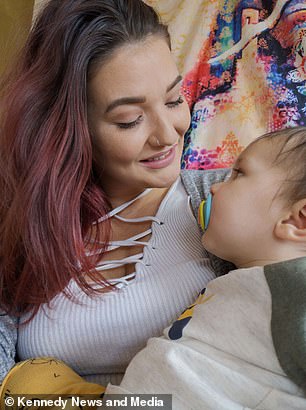 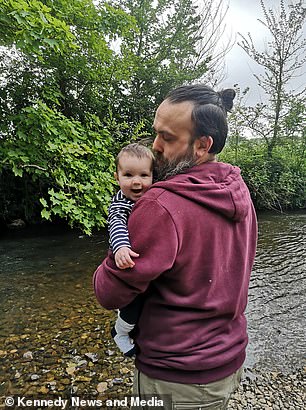 The couple thought they would have a minimum of three children and expected a big family, but now they focus all their love on Harry

Imogen said: ‘Seeing how little was going into my body, nothing really, I was very aware that Harry was not getting very much. It was really scary.

‘It was a relief at every scan and every appointment to see his heart was normal and he was growing normally. He was alright throughout, he was a trooper.

‘Because of my HG there was a risk of preterm labour so I was expecting him to come early but he was actually just over a week late so he really stuck in there.

‘The second he was born, my sickness subsided so I was really able to enjoy that he had arrived and enjoy this lovely baby. All of the horrible pregnancy stuff went away and there was just Harry.’ 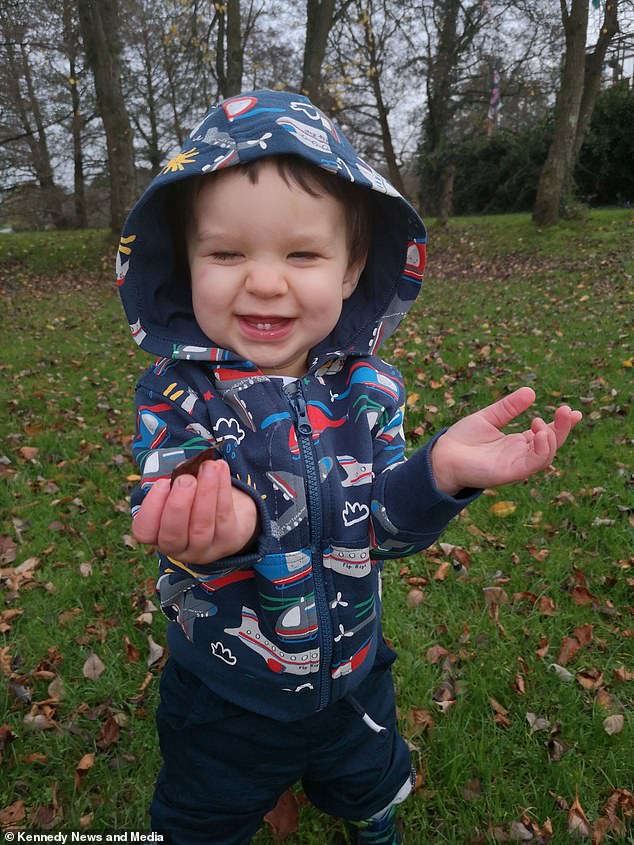 Harry when he was five months old. Imogen is now sharing her story so that other mothers suffering from the same complication don’t feel as alone as she did

While her sickness is long gone, Imogen is still suffering some after effects on her body of so many months in ‘starvation mode’ and confined to bed.

The mum, who was once very active and loved long walks, now tires very quickly but is working hard to gradually rebuild her fitness levels.

Before being diagnosed with HG, Imogen had never heard of the condition and found there was a lack of support and information available throughout her pregnancy.

Not wanting other mums to feel as alone as she did, Imogen is sharing her story to raise awareness.

Imogen said: ‘I had never heard of HG before getting my diagnosis but getting that diagnosis was such a relief to know what it was.

‘I found a lot of doctors and midwives really didn’t have much knowledge about it. It wasn’t until after I gave birth to Harry that I even managed to find a support group.

‘That’s why I really want to raise awareness of it because there really isn’t the support there needed for mums.

‘Seeing all these other mums going through it and they just feel so isolated and miserable and so guilty because they don’t want to be pregnant but there’s no support for them is awful.

‘I think the more people are educated about it, and this includes health care professionals, the easier it is going to be for mums going through something like that.

‘It’s hard on mums and it’s hard on their partners as well. But some women don’t have any support network and could be going through it completely alone. That’s quite scary.’