The Theatre Royal sits under a layer of thick dust beneath the feet of the Sydney's MLC Centre, its stage and first rows of empty seats illuminated by a solitary light.

Ghost lights are an old theatre tradition and this one keeps the promise that the theatre, closed since 2016, will reopen again. 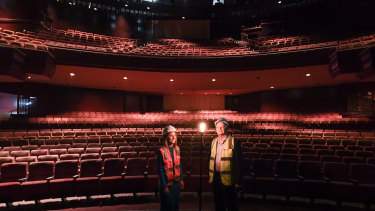 The ground floor foyer where musical theatre lovers once thronged is now a hive of construction activity, part of a $170 million refurbishment of the 1976-built office tower by owners Dexus.

Within weeks, floor to ceiling windows will be installed to form a glass "drum" entrance that will restore the theatre's street presence onto King Street.

The approach will be dramatic, says Tim McFarlane, executive chairman of Trafalgar Entertainment Asia-Pacific, which won the theatre's 55-year lease.

The city's oldest theatre, on the same site since 1875, is slated to reopen in September 2021 with the surrounding precinct of luxury retail, bars and restaurants to follow by the year's end. 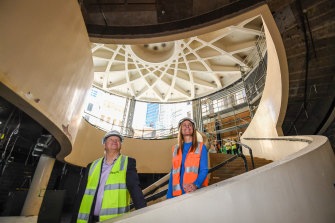 Inside the renovated Theatre Royal in King Street.Credit:Peter Rae

Theatre-goers can step from show to restaurant to bar by lift or escalator in a precinct Dexus's head of city retail development Amanda Pieriboni believes will underpin the city's night-time economy.

Inside the theatre, Trafalgar is to restore the gold-finished wave formed ceiling, repaint the ribbed walls in demure gold and replace red carpets and existing seating.

"They're the colours that [Harry] Seidler wanted here, and red and gold are the colours of almost every Theatre Royal around the world," McFarlane says. "We are honouring Seidler's design wishes wherever we can."

The stage is to be relevelled. "The flying system is in good order, it just needs servicing," McFarlane says. "There'll probably be changes to the fire curtain and house curtain."

Post-pandemic, the future of Sydney theatre is looking rosier with the Sydney Theatre Company giving the go-ahead to Rules for Living and The Picture of Dorian Gray after the government eased restrictions on audience capacity. 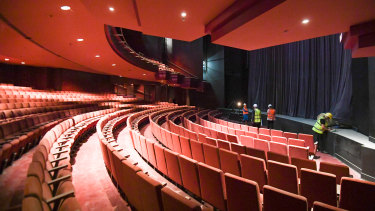 Inside the refurbished Theatre Royal.Credit:Peter Rae

It is hoped capacity limits will be lifted entirely by the time Steven Found's Pippin opens at the Sydney Lyric Theatre in November but more likely it will be for Disney's Frozen at the Sydney Capitol in December.

Next March, in a coup for Sydney, the Tony, Grammy, and Pulitzer Prize-winning musical Hamilton will open at the Lyric.

"We've seen it happen with the film industry, producers are bringing movies here because they perceive it as one of the safest places in the world to make movies," Arts Minister Don Harwin said. "That could happen with commercial theatre next year."

"From October 1 we'll be moving to 50 per cent capacity in our performance spaces. If our health authorities are confident with the arrangements being made then that may give them the confidence to approve normal operating theatre capacities by Christmas. It's important everyone continued to follow health advice so that our state can continue moving forward."

To this end, Trafalgar says it is in feverish discussions around opening productions.

"It's a question of what we think is the right mix to open," McFarlane says. "Not in this order, but they'll be a high profile play, they'll be a couple of musicals. There's interest from other art forms to come in here. Dance shows. We want to curate a mix of those to show what this theatre is capable of.

"Several of the shows we are talking about are shows that would have, in a couple of instances, opened on Broadway, and they may open here in Australia instead."

Pieriboni points to the theatre's iconic circular foyer ceiling piece, original to the Seidler design. The Pier Luigi Nervis chandelier will be reinstated where it once hung. A series of intertwined silver metal geometric squares, it's been in storage since it was removed for Phantom of the Opera. 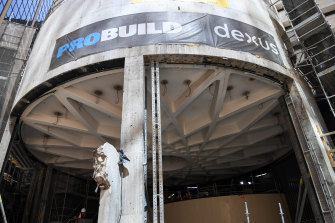 Looking from King St to the “drum” entry where ceiling to floor glass will be installed. Credit:Peter Rae

"It's important to maintain a legacy for the site," Pieriboni says. "But Harry Seidler was all about innovation, so we are seeking to bring it into a new contemporary period that people can enjoy."