Quick quiz: what was the first television series Ted Danson starred in after Cheers? It was 1996’s Ink, where he played a newspaper columnist alongside then wife Mary Steenburgen. Can you name the show Sarah Michelle Gellar initially headlined after Buffy the Vampire Slayer? It was the 2011 thriller Ringer. She played dual roles, but it lasted one season. Don’t worry, I had to look them up too.

For an actor on television there's one thing that's harder than getting a hit show and building a character that becomes a signature starring role: finding the right role to top that success. When audiences – and the industry – instantly see you as the part you’re known for worldwide, the residual image isn’t just hard to shake, it’s a straitjacket. Over successive flops Matthew Perry could never escape from Friends’ Chandler Bing; for years to come Phoebe Waller-Bridge will probably be Fleabag. 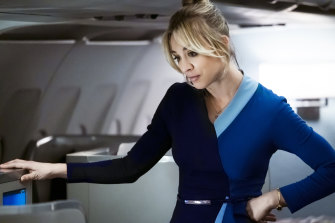 Kaley Cuoco is the executive producer and star of The Flight Attendant.

Over the past few weeks, two major television stars have returned to the medium – and expectant viewers – to carry a show on their famous shoulders. Kaley Cuoco, who for 12 seasons razzed the geek squad on hit sitcom The Big Bang Theory, spun out of control on the Foxtel/Binge comic thriller The Flight Attendant, while Bryan Cranston, who memorably went from chemistry teacher to meth manufacturer on Breaking Bad, is facing wrenching dilemmas on Stan’s weekly drama Your Honor.

Both actors chose to star in limited series, a decision that lessens the burden and keeps their long-term options open. It also, in theory, should allow them to take more of a risk in terms of genre, although in practice only Cuoco has done that. In The Flight Attendant she plays Cassie Bowden, a jangled hostie whose dalliances include alcohol and “3C”, a.k.a. Alex Sokolov(Michiel Huisman), a charming businessman she spends a layover in Bangkok with only to wake hungover the next morning to discover him next to her brutally murdered.

Cuoco uses the goofy antics of Big Bang Theory’s Penny Hofstadter as disarming camouflage. When Cassie tries to cover up her connection to Alex, even as the FBI start investigating his case, her jumpy guilt and amateur investigation suggest the farcical. On a bender to escape reality she sings along to Dolly Parton’s Here You Come Again in a bar, and for a moment it’s endearing until the camera lurches sideways and you’re reminded that the lurking backdrop here is addiction and buried childhood trauma.

The Flight Attendant can’t quite avoid contrivance, but it has a fizzy, subversive energy and black humour that Cuoco exemplifies. Cassie denies reality until she can’t, and the exemplary supporting cast – particularly Girls graduate Zosia Mamet as her wound tight best friend – have their own illusions that start to bear down. It would have been easy for Cuoco to look for a duplicate of Penny, or even spin the role off, as Matt LeBlanc unfortunately did with Joey after Friends, but she’s found a way to bend her likeability to the point of fracturing. That’s no small achievement.

In Your Honor, Bryan Cranston gives a first-rate performance, but the part never quite steps out of the considerable shadow cast by Breaking Bad’s Walter White. Cranston plays Michael Desiato, a conscientious New Orleans judge and widower whose panicked teenage son, Adam (Hunter Doohan), flees the scene of a hit and run where a young motorcycle rider dies. The pair get as far as a police station before Michael realises the victim’s father is the city’s murderous crime boss and that his son won’t live long enough to go to trial. From that point on he uses his experience to manufacture a cover-up for the two of them. 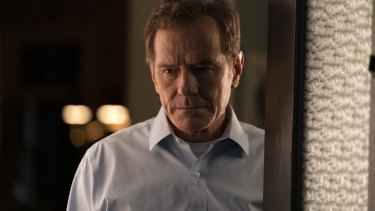 Bryan Cranston is first rate in Your Honor, but never leaves the shadow cast by his role as Walter White in Breaking Bad.Credit:Showtime/Sip Bolen

With its threatening loose strands and worrying missteps, the show is an excruciating thriller. From the second episode Michael is sprinting to stay a step ahead of crumbling circumstances. It’s just that as you watch Michael set up an alibi and twist the system to save himself, everything that a few days prior he would have railed against, it’s hard not to think of Walter White, a man who told himself he was providing for his family as he inexorably built a criminal empire and drove away the people he claimed to love above all.

Your Honor also has showy writing and an interconnected plot that is a little too satisfied with how it knits everything together. When Michael tells a police officer who testified in his court that “you can’t judge a man on what you fear he might become”, the reflected message is rather obvious. Still, Cranston has delivered eight years of film and stage performances after the end of Breaking Bad (Mad Men’s Jon Hamm is probably taking note). He might not have furthered an already stellar career, but at least Cranston didn’t sully it. That’s also no small achievement.