Edible gardens are popping up in schools all over the country but a high school in Broadmeadows has gone one step further and installed a no-waste indoor farm in its canteen. It looks like a vending machine but instead of being stocked with Coke and crisps it contains microgreens, mushrooms and tropical fish.

In this lit-up box, 87 secondary students are growing broccoli and radish microgreens in pots of hemp fibre. The roots are irrigated with nutrient-laden water recirculating from a fish tank and the shoots bask in the glare of full-spectrum LED lights. There are also recycled plastic buckets filled with straw and four different varieties of oyster mushrooms. 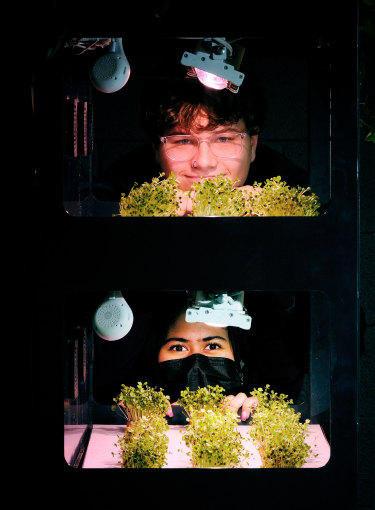 Typical farm life this is not. It is a carefully controlled, highly manipulated system that is dependent on neither the vagaries of weather nor the fertility of soil. It feels more sci-fi than bucolic countryside.

Geert Hendrix, the founder of Farmwall, the business that installed this soilless set-up, says the farm taps into aspects of science, technology, engineering and mathematics as well as how to grow nutritious food that is good to eat. 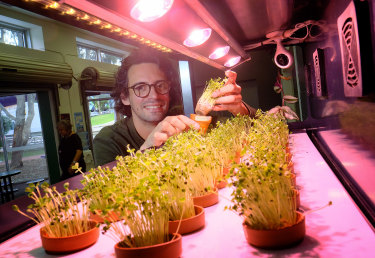 Geert Hendrix says the farm taps into aspects of science, technology, engineering and mathematics as well as how to grow nutritious food that is good to eat.Credit: Luis Enrique Ascui

Since establishing Farmwall in 2017, Hendrix has been working with engineers, scientists, designers and horticulturalists to come up with a variety of new ways to grow food. While he has introduced indoor growing systems into offices and restaurants, this is the first time he has put one in a school.

“The idea is to get students interested in food from a new angle,” Hendrix says. “How we produce food in cities is changing and farmers in the future will need to know about technology, data, nature and biology. Climate anxiety is a real thing with young people at the moment and this helps to show them about the exciting times coming up, and how they can be part of the solution.” 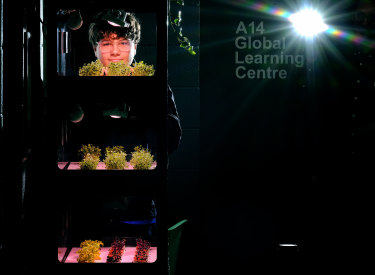 The farm had only been up and running at Hume Central Secondary College’s Dimboola Road campus for little more than a week when we visit but year nine students Chase Smith and Rosie Alaese, who are both 14, are already fans. They sowed radish seeds on “nests” of hemp fibre in a food technology class, covered them with a tray to give the seeds the required “blackout” period, and when they germinated about three days later transplanted them into a pot in the Farmwall system. Any day now they will begin harvesting their microgreens for their lunches.

Smith says he likes how “efficient” the farm seems and that it makes the whole canteen feel “more lively”, while Alaese says it has got her thinking about what she might try growing at home. 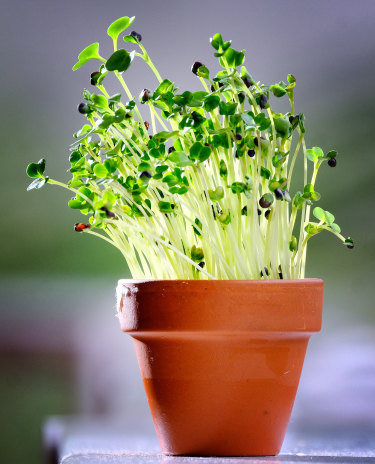 The students’ microgreens are almost ready to harvest.Credit:Luis Enrique Ascui

The school’s food and textiles teacher, Debra Kimpton, who set up her first school vegetable plot in the 1980s and has taught students everything from how to grow potatoes in beds made from recycled tyres to how to cultivate strawberries in hessian bags, says the indoor farm takes food growing to another level. “To be able to see it in school is one of the highlights of my life as a foods teacher … it can lead to anything,” she says.

While students are responsible for their own pots of microgreens, teachers will oversee the growing of the mushrooms that are in kits prepared by Sporadical City Mushrooms, a small zero-waste urban mushroom farm based in Alphington.

Hendrix says while Farmwall is sponsoring this farm and will visit each week to ensure everything is running smoothly, there is the potential for a range of other businesses to sponsor farms at other schools and thereby encourage more “sustainable and regenerative thinking among students who will enter the workforce looking for purposeful careers”.

He also sees it as a way for businesses to improve students’ physical and mental health, at a time when the world faces “more and more disruption”.

“When lettuces are $10, knowing that you can grow food creates a calmness and groundedness … you are not dependent solely on supermarkets and supply chains to feel safe and secure.”

While the system is expected to produce more than four kilograms of microgreens each week and about 1.5 kilograms of mushrooms a fortnight, Hendrix says the main aim is “not to grow a lot of food”.

“Our job is to get students interested in nutrition, food and agriculture to provide the inspiration to make a better future.”

Most Viewed in Lifestyle