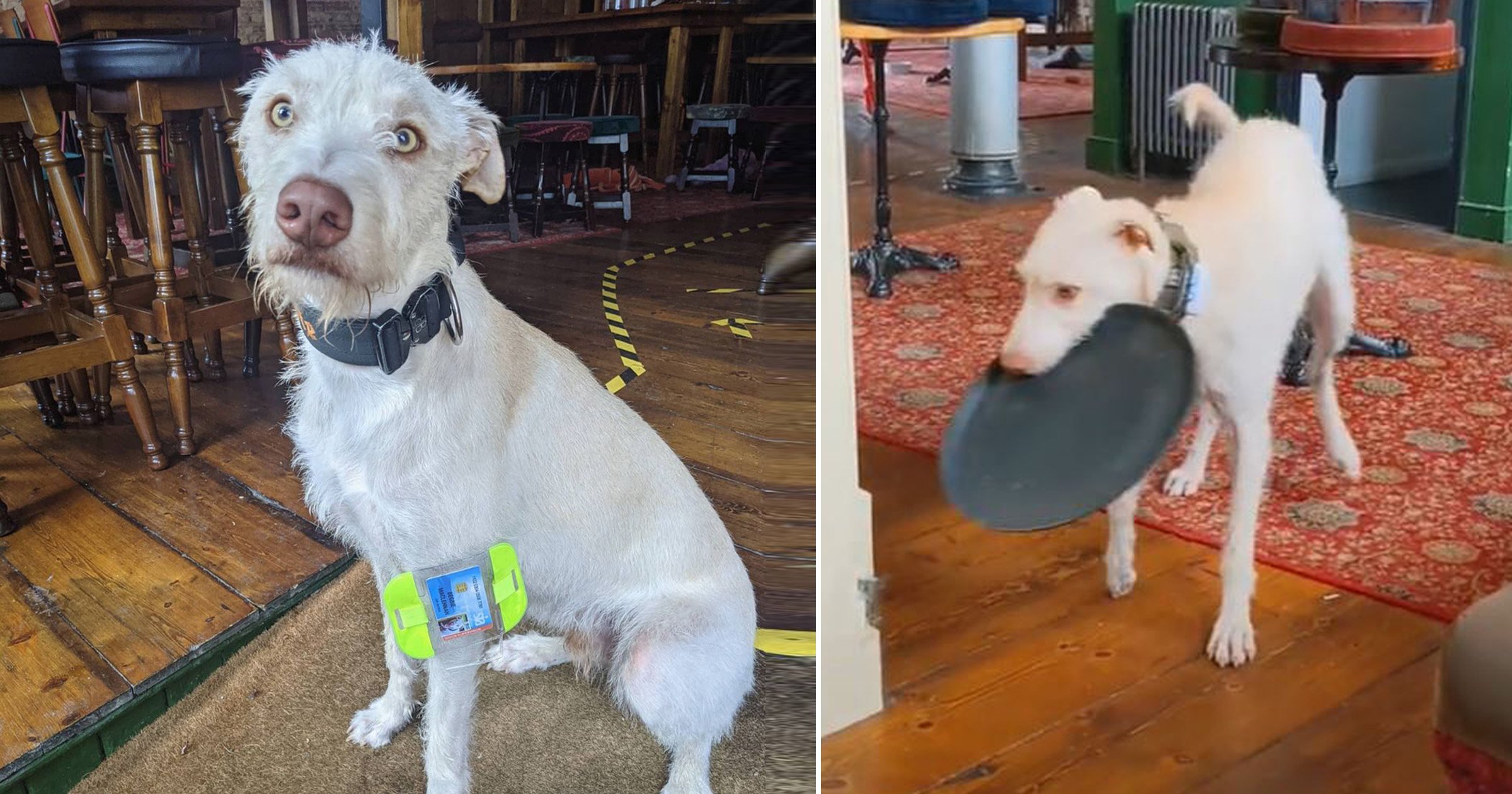 What would make a trip to the pub even more enjoyable?

An adorable pub dog who also happens to be the bouncer, just like Begbie the lurcher.

Begbie has shot to fame in recent weeks, after a video of him on TikTok received over 1.7 million views and 400,000 likes.

In the clip, his owner Catherine, manager of The Cow pub in Brighton, can be heard shouting ‘excuse me, we’ve still not had our drinks!’ Begbie trots over with an empty tray in his mouth, grunts and quickly turns around when he hears the command.

The lurcher is a much-loved member of staff in the establishment and is adored by everyone and anyone who frequents the bar.

And now he is the apple of social media’s eye with viewers expressing their fondness for the clever pooch.

‘He’s trying his best, it’s his first day on the job,’ joked one user.

‘I would wait all day long for my drinks if this beautiful fur baby was serving me,’ said another.

Meanwhile, it’s not just bartending that Begbie is an expert in, he’s now turning his paws to security.

In an Instagram post on his official page, Begbie is pictured proudly wearing his new ‘door supervisor’ badge. The caption on the picture (which was posted during the Euros) reads: ‘Fully licensed and ready for the football.’

‘I got Begbie in early March 2020, when I’d already been working at my bar for a little while,’ his owner Catherine tells Metro.co.uk

‘He started coming in at eight weeks old. I used to keep him in a little bed behind the bar. Obviously then a lockdown happened, and he was away from the pub until we reopened.’

Catherine was worried that the time away from the pub would make Begbie anxious around revellers, but this was not the case.

‘He’s such a social boy, he adores all the fuss,’ she explains. ‘We have customers who come in just to see him. He’s got a huge pile of toys and loves to show them to everyone. If the first toy doesn’t get a customer to play, he’ll just keep bringing them out.’

When it comes to his newfound fame, Catherine was surprised but says she is delighted that people adore him just as much as her.

‘I was quite surprised he did so well on TikTok,’ she notes. ‘He’s got a little following from the Lurcher Appreciation Society Facebook group so I mostly post for them.

‘But I think his waiter video really resonated with hospitality workers.

‘It’s definitely something I’ve done a few times as a server.’

Send us an email at [email protected]