The Albanese government’s honeymoon has been one of the sweetest in political memory but could also be one of the shortest as it grapples with a series of acute interlocking problems that would test even the best and most experienced of governments. 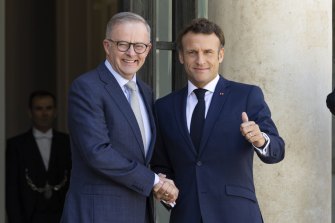 At least it starts on the hard road ahead on something of a high.

Albanese has unequivocally achieved the required international reset after outgoing prime minister Scott Morrison left Australia looking like shop-soiled goods in the market of global opinion. He has looked assured, been appropriate and made Australia a credible international citizen again.

The Peter Dutton-led opposition’s response to Albanese’s successful international reset underlines just how much work lies ahead in the federal coalition’s rebuild.

Dutton is due credit for saying it was “very good that the prime minister is heading to different parts of the world” ahead of Albanese’s latest trip, his third as prime minister. “Obviously, he’s got a very extensive travel itinerary at the moment and to be in France, that’s a good move.”

The attack fell flat when Albanese quite reasonably queried which of the trips he shouldn’t have gone on? Given one was to the Quad meeting in Tokyo, one was to our vitally important neighbour Indonesia, and the other was to attend a historically important NATO meeting, Tehan’s attack looked stupid, especially when NSW Liberal Premier Dominic Perrottet backed in behind Albanese.

It is true that the government faces an awesome list of problems. The NSW floods were first on Albanese’s list upon return. Albanese and Perrottet toured flood-affected areas together on Wednesday and declared immediate federal-state co-operation in response. The prime minister announced additional federal government financial support for affected NSW residents, on top of existing assistance, from 2pm on Thursday.

The speed and co-operative tenor of the engagement between the Labor prime minister and the Liberal premier was positively striking compared to the truculent Morrison-Perrottet relationship. 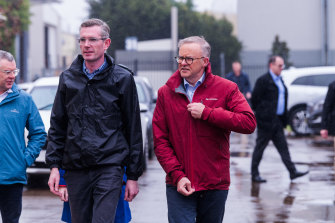 It was a sign to the states that Albanese will be a good faith player – a crucially important change flowing from the election given the range of problems involving both levels of government that need urgent attention.

Pre-pandemic, state hospital systems already lacked safe margins of staffing, resources and infrastructure that would enable them to deal with a crisis.

When the crisis inevitably came – in the form of the COVID-19, but if not that eventually something else – the system was stretched to hilt and, at times, beyond it. And it still is. 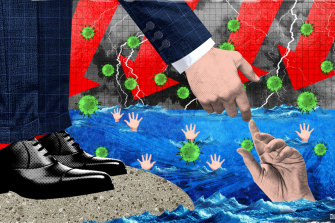 State premiers around Australia, of both political complexions, have shown little sign they know how to, or have the will or resources to, fix their hospital systems.

This is being demonstrated right now as COVID infections rise, state health systems reel under COVID-driven absenteeism, and a thousand Australians die every three weeks from COVID – some of them prime age and otherwise healthy.

This presents a big challenge for Health Minister Mark Butler.

The well-known longer-run issue is how to help the states fix health systems they are constitutionally responsible for without the federal government bleeding cash.

But the immediate challenge is how to itself snap out of, and lead the states in snapping out of, their sleepwalking into a blowout in already serious COVID absenteeism, disability and death. This includes states like Victoria and Western Australia which set high public policy standards earlier in the pandemic but then followed the low bar approach of NSW.

By the end of January 4000 Australians had died of COVID since the pandemic began. At the beginning of July the total number of dead had grown to 10,000. With the new immunity-evading BA.4 and BA.5 variants, this is set to worsen still.

Medical leaders are knocking themselves out urging governments to act. Cowed by the reaction to lockdowns and mandates, politicians have adopted a “nothing to see here” stance based on the false and lazy idea that it’s a choice between mandates or nothing. 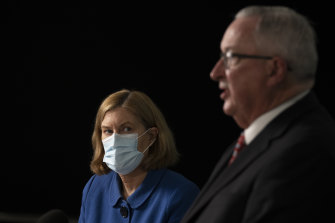 Managing to get even 50 per cent compliance right now could make all the difference in getting the COVID Reff rate (the effective reproduction number, which shows the number of people infected by each positive case) below one – the key to containing and reversing the current surge.

But it won’t happen with messaging like that from NSW Chief Health Officer Kerry Chant, who lamely tweeted on Wednesday: “One of the little things you can do to protect yourself and others through this next wave is to wear a mask in indoor public spaces…”

Nor was Chant’s appearance at Wednesday’s COVID press conference good modelling of what’s needed. Chant had a tired-looking surgical mask, according to overwhelming research evidence a tiny tool against COVID compared to the dramatically more effective N95 masks.

Images count. Humans are herd animals. We do what we see other people around us doing.

If leading health officials won’t model pandemic-appropriate behaviour, what hope of getting citizens to?

When Mark Butler appeared maskless on the weekend to make a juvenile diabetes event surrounded by dozens of children at close quarters, it sent a very bad message. Forget social distancing. Forget masks. Pandemic? What pandemic?

It falls to Butler to lead the states and the nation in explaining what people need to know to stay safe, in a big persuasive public health campaign like many the federal government has run before. “Slip, slap, slop” and “Life. Be in it.” are among the classics. The big, sustained campaign promoting condom use during the AIDS crisis is another. It’s not rocket science.

More distance and fresh air. Get your booster. Mask up – and make it N95 not surgical. Butler needs to get on with the job and persuasively spread the word, and not just in relation to jabs.