With deepest apologies to Jane Austen: It is a truth universally acknowledged that a single man in possession of prime ministerial ambition must be in want of a wife.

Or if not a wife, then a girlfriend.

In the case of Anthony Albanese, who is currently polling as our likely next PM, that girlfriend is Jodie Haydon, a 43-year-old strategic partnership manager for an industry superannuation fund, who lives in Albo’s electorate. 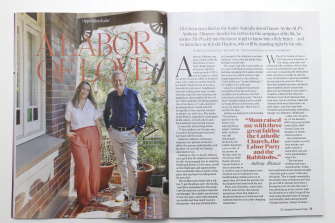 At home with Anthony Albanese and partner Jodie Haydon.

The relationship has been known for a while, but on Thursday the couple went public in the time-honoured way that prime ministerial hopefuls must: with a lovely photo shoot and accompanying feature in The Australian Women’s Weekly.

A previous unmarried prime minister fell foul of the Women’s Weekly treatment – in 2013 when Julia Gillard posed for the magazine knitting a toy kangaroo for Prince William’s and Kate’s first baby, she was ridiculed.

Albo has done nothing so controversial as reveal a love of craft.

He and Haydon are photographed standing on the tessellated tiles of his Marrickville Federation bungalow and in the interior of the house, guarded by Albo’s fluffy white dog. 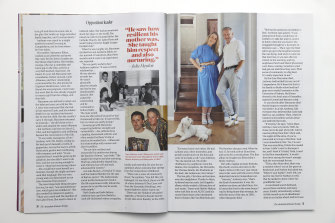 At home with Anthony Albanese and partner Jodie Haydon.

They have a cute meet-cute: the pair first laid eyes on each other at an event in Melbourne, where Albo asked if there were any South Sydney rugby league supporters in the crowd (it is unclear why). “Jodie yelled out, ‘Up the Rabbitohs!’,” he tells the magazine.

A drink between the Rabbitohs-obsessed Opposition Leader and the Stanmore-based superannuation bachelorette followed.

They met at Young Henrys in Newtown – a hip brewery with suitably inner-west cred – and the rest is history.

The article gives a brief description of Haydon’s background and touches on Albo’s “heartbreaking” divorce from former NSW deputy premier Carmel Tebbutt, but is otherwise a puff piece focused on the Opposition Leader.

It details his Labor back-story, the boy raised by a single mother on a Camperdown housing estate, who learned the value of universal healthcare the hard way – his mum suffered from debilitating rheumatoid arthritis.

The write-off for the story notes that Albanese has “been described as the leader Australia doesn’t know”, and the piece is an obvious attempt to correct that, to bring the Opposition Leader to a mainstream, female audience.

And while he doesn’t wield a ukulele, the story is lifted from the same public relations playbook as the 60 Minutes interview Prime Minister Scott Morrison recently did with his wife Jenny, in which she apologised for taking her family to Hawaii during the 2019-2020 bushfires.

Men in modern politics still use women to soften them, and in the case of Morrison, to apologise for their mistakes.

And while most political candidates are married men with nuclear-ish families, it’s unclear whether contemporary voters mark them up for being family men or husbands. Albo presents a more modern model: divorcee, single dad, boyfriend.

What is clear is that political spinners obviously think voters care – why else would they bother?

Morrison has brought his wife Jenny into the political fray many times.

Their family holiday in Hawaii became infamous, and he referenced Jenny as a sort of moral angel when formulating a response to Brittany Higgins’ rape claims.

In the recent 60 Minutes interview, she came forth as Morrison’s softer and more likeable better half, who defended her husband and patched up his blind spots.

In Australia, we don’t have a sense of ownership over first ladies as the Americans do, indeed the role doesn’t exist formally. But we do like to run an eye over the partners of our prime ministers, because the person they love probably tells you something about who they are.

Perhaps, for women voters, who have too few chances to elect female candidates, we are comforted to know that our male politicians can sustain relationships with actual human females who seem to like and respect them.

In the case of Gillard – our first female prime minister – her unmarried, childless status spouted confusion in some and outright misogyny in far too many. Her partner Tim Mathieson was subject to nasty attacks, and the ABC aired an insulting comedy about their relationship.

Her successor Tony Abbott had a photogenic and female family – wife Margie and their three daughters. He famously said his daughters had turned him into a feminist, but in 2015 he was bleeding female voters, and Margie Abbott appeared in the Women’s Weekly. 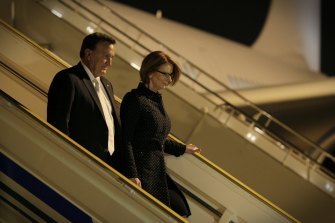 “I guess the Prime Minister and his advisers have made a very clear judgement that projecting Tony Abbott’s wife can help rather than hinder his political fortunes,” PR expert Michael Smith told the ABC at the time.

Hazel Hawke was beloved by Australians, so much so that most felt enormous sympathy for her when Bob divorced her to marry Blanche d’Alpuget (after he left office, of course).

Paul Keating had the elegant Annita (the couple also had a post prime-ministership divorce) and John Howard had Janette, who seemed to match him. Malcolm had Lucy, who always came as a pair.

Do voters care about who their politicians are dating or married to? Should we? It probably comes down to the darkest and oldest of arts: storytelling. Political campaigns are all about competing narratives.

Narratives need characters, and who doesn’t love a good marriage plot? Austen taught us that.