A peek at the making of Wes Anderson’s latest film, a paean to print journalism. 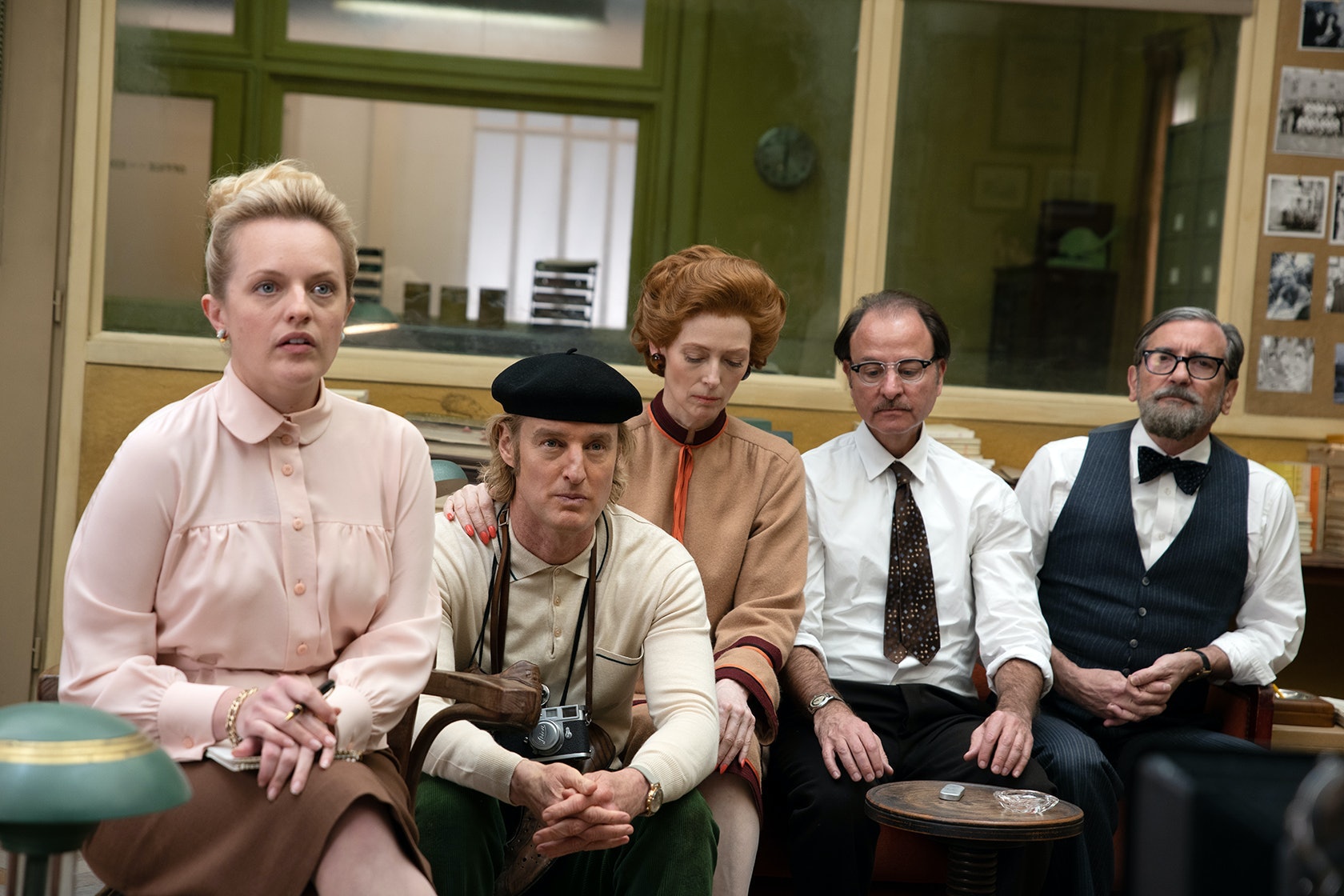 Wes Anderson’s films are as instantly recognizable for their twee surrealist aesthetic as they are for their recurring cast of characters, including stalwarts Jason Schwartzman, Bill Murray, Owen Wilson, Tilda Swinton, and Anjelica Huston. They, along with new additions Timothée Chalamet and Saoirse Ronan, appear in Anderson’s latest work, The French Dispatch, which follows the staff of a fictional American publication in France. When it comes to Anderson’s behind-the-scenes team, the director maintains a similarly tight-knit crew. “Wes brings together the most wonderful and lovely group of people you could ever hope to hang around, to make these movies,” says production designer Adam Stockhausen, who has worked with Anderson ever since 2007’s The Darjeeling Limited. Wilson’s mother, Laura, a photographer, is another set regular, snapping the action between takes. Here, she shares her photographs of the French Dispatch set, in Angoulême, a town in southwestern France, and, along with Anderson and Stockhausen, gives us firsthand details about the making of the film.

Set decorator Rena DeAngelo found the books, notepads, and other ephemera for the writers’ offices (like the one Frances McDormand sits in here) at flea markets all over Paris and Le Mans, as well as in “basements and cupboards and attics in Angoulême,” says Adam Stockhausen.

Anderson filmed in February, and the set—which was built inside an abandoned felt factory—was frigid. So Anderson, here with Bill Murray and Owen Wilson, donned a scarf to stay warm. Luckily, it went along with his look. “Wes has these beautiful suits made for him in tweeds, but after months of working, they get to be a bit stressed,” says Laura Wilson.

“This little équipe is me, cinematographer Robert Yeoman, production designer Adam Stockhausen, and producer Jeremy Dawson,” Anderson says. “We appear to be in a good mood.”

“The pictures on the wall aren’t just any old scrapbook pictures—they’re all significant images, which reinforce the story line,” says Wilson of the frames behind (from left) Jeffrey Wright, Owen Wilson, and Tilda ­Swinton. Among the photos were portraits of writers, including Truman Capote and Gore Vidal, whose workspaces influenced the look and feel of the set.

Wilson captured Wright while he was “lost in thought,” as she describes it. “That’s the thing about Wes’s sets: They’re welcoming, but they’re very purposeful. Everything is planned and executed carefully and thoughtfully.” Meanwhile, for Anderson, what’s going on in the image is quite straightforward: “The great Jeffrey, surrounded by hands,” he says.

Owen Wilson, outfitted for the felt factory’s February chill, examines a face sheet in one of the on-set production offices.

When Stockhausen looks at this image of Wright’s character in his colorful office, all he can see is the decor. “I flipped out and hung this wallpaper with 12 hours to go,” he says. “It was a bit of a panic decision—we had some kind of really boring William Morris thing up, and at the last second, I said, ‘Wes, I gotta change it.’ Nothing against William Morris, but this was just way more fun.”

Although Wilson was formally introduced to ­Swinton for the first time on the set of The French Dispatch, she’d admired the actor for decades. “I worked for Richard Avedon, and I knew how much she meant to him when he first had the opportunity to photograph her,” Wilson says. “She wasn’t at all high-handed or dismissive; she was curious and thoughtful. She was a template in what it is to be a cooperative person being photographed.”

The author and cartoonist James Thurber’s habit of drawing on his own walls was another inspiration for the office decor. “If you look behind Owen’s head, you can see a little mouse,” says Stockhausen. Above, from left: Elisabeth Moss, Owen Wilson, Swinton, Fisher Stevens, and Griffin Dunne.

“Owen has a very competitive nature,” Wilson says. “He’s one of three brothers, so his competitive instincts are honed to a very fine point. And Bill, of course, rose to the occasion.” The two actors set up this makeshift putting green behind the soundstage.

“We liked the idea of having an older building that was repurposed into its current function,” Stockhausen says of the French Dispatch offices. He lists the Associated Press and Cahiers du Cinéma headquarters as key sources of inspiration. “You could feel the life of the place,” he says of the photographs he studied of Cahiers du Cinéma.

According to Anderson, this photo depicts “me and Bill, searching for something.” But Wilson can expound: “Wes and Bill are redefining a character’s purpose in a scene here,” she says.

“Owen is in a familiar pose, about to deliver a punch line,” says Anderson of this photograph of the actor, with Pablo Pauly.

McDormand’s character has a relatively spare office, punctuated by stacks of books, toast, and, as Stockhausen describes it, “a perfectly rectangular window.” He adds, “The Shaker austerity is really fun for the character.”

Anderson and Owen Wilson first met in a creative writing class at the University of Texas, after which they would go on to work together on Anderson’s first movie, Bottle Rocket. “They were so inexperienced that I remember someone on set saying, ‘Wes, say, Action.’ And Wes said, ‘Oh. Action!’” Laura Wilson recalls.