ANDREW NEIL: Why Britain must pray that Joe Biden can hold Fortress America… as thousands of US troops prepare to descend on an inauguration like no other

More than 20,000 National Guard troops will be deployed in Washington DC on Wednesday for the inauguration of Joe Biden as 46th President of the United States — 50 times more than the number envisaged only two weeks ago.

In addition, regular army troops will be on standby at nearby Fort Myer in northern Virginia. The Marine Corps will be on alert at their base in south-east DC. Thousands more federal and local law enforcement officers will also be on duty, in uniform and plain clothes. Specialist units to handle chemical and biological weapons attacks have already been activated. The Secret Service is in charge of overall planning.

It is an unprecedented show of force for a presidential inauguration. 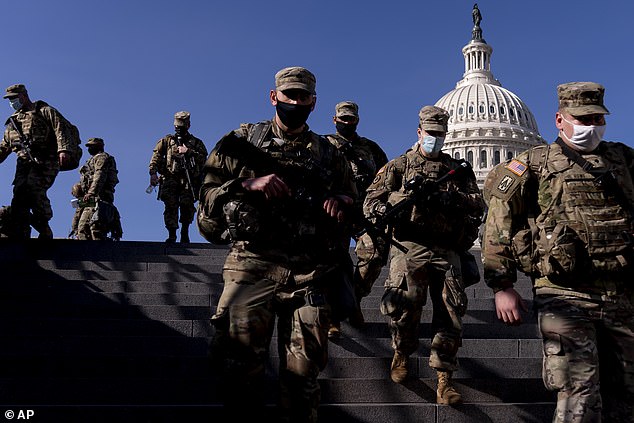 Rightly, the authorities are determined to avoid a repeat of the appalling scenes on January 6 when a pro-Trump mob, egged on by the President, was able to rampage shamefully through Capitol Hill, bringing the democratic process to a halt, albeit temporarily, with five lives lost in the mayhem.

But it also speaks to the savage divisions, backed by the underlying threat of armed violence, that now scar America so deeply.

Even during the Civil War in the 1860s, which claimed the lives of 750,000 Americans, or the Vietnam War, which provoked civil unrest across the country in the 1960s and early 1970s, no presidential inauguration was accompanied by such a military deployment as the one which will be on display next week. And it’s not confined to the U.S. capital.

All 50 states are preparing defences in case armed mobs carry out threats — and they have been numerous — to attack state capitals. Some governors, such as New Mexico’s, have declared a state of emergency. Others (such as Oregon, Washington state, Michigan, Wisconsin) will deploy their National Guard around government buildings; the homes of local politicians are being offered protection. 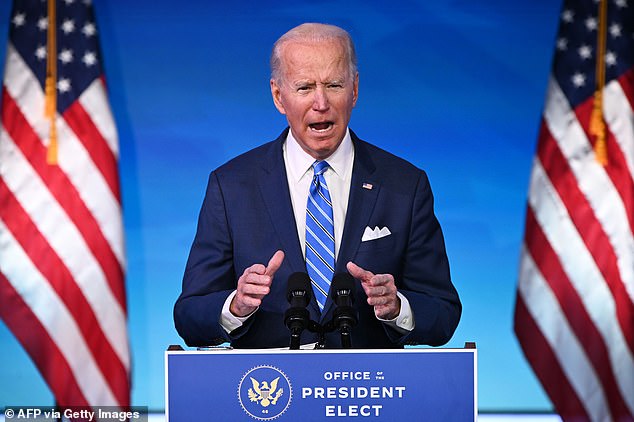 More than 20,000 National Guard troops will be deployed in Washington DC on Wednesday for the inauguration of Joe Biden (pictured) as 46th President of the United States

In the peaceful passing of power from one president to another, which has happened 44 times in 224 years since George Washington handed over to John Adams in 1797, such contingencies have never even been contemplated, much less initiated.

Donald Trump, in another symbol of American division, has refused to attend the Biden inauguration. This is not quite so unprecedented. On the day of Thomas Jefferson’s inauguration in 1801, John Adams snuck out of the White House to catch the 4am stagecoach to his home state of Massachusetts.

His son, John Quincy Adams, who also became president, did a runner too: in 1829 he could not bear to see power pass to Andrew Jackson, a Trumpian figure with a populist bent, extravagant hair, a Scottish mum and a property developer (although in stark contrast to Trump, also a war hero).

The last outgoing presidential no-show was Andrew Johnson in 1869, who was also impeached (unlike Trump, only once). All three — the two Adamses and Johnson — were one-term presidents, or ‘losers’ as Trump would call them, a category to which the defeated President, if he were honest, would now add himself. 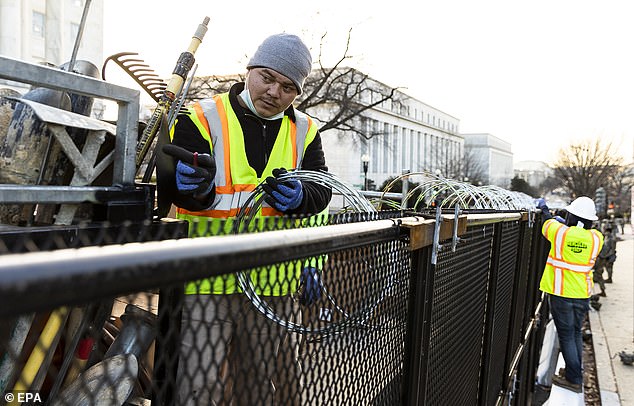 Each of them had been leaders in eras of especially vicious election campaigns and deep, violent divisions in the nation.

But nothing as bad as today. Federal intelligence reports speak of extremists, especially on the far Right, of being out to trigger a race war by forcing a ‘climactic conflict on the United States’.

A group called the Boogaloo, fired up by Trump’s false claims of a ‘stolen election’, explicitly talks of a second civil war.

There are certainly enough guns around to fight one. More than 23 million firearms were purchased by Americans in 2020 alone (and that’s just the legal ones), a rise of 63 per cent on 2019. New crimewaves are sweeping American cities: last year saw the biggest ever recorded one-year rise in murders (41 per cent up by the summer in 21 major cities), adding to the febrile urban mood.

Violent hard-Left protesters have been able to take control of parts of some cities, such as Seattle and Portland, seemingly with impunity and without subsequent penalty, which gave their equivalent on the hard Right the idea that perhaps they could do the same on Capitol Hill.

In this climate it is hard to find reasons to be cheerful about America’s prospects, especially its chances of healing divisions wider than the Grand Canyon.

But let us not forget that the Capitol Hill mob was evicted after only a few hours on January 6. Congress quickly resumed its democratic duty and certified Biden as the next President. Washington DC law enforcement failed but the U.S. Constitution did not. I expect the Biden inauguration to go peacefully on Wednesday, if only because the scale of the security lockdown will deter troublemakers.

Republican claims that Biden will be a creature of the noisy Left-wing of his party are nonsense. Likely, his will be a mediocre, modest presidency. There is nothing of Franklin D. Roosevelt about him; he will not bring the nation together with an inclusive vision that lifts the spirits and encompasses a programme of essential improvements, like Roosevelt’s New Deal.

But he is a natural moderate and a deal-maker. He will have a narrow majority in the House and depend on his vice-president’s casting vote in a 50:50 Senate. He will be confined by a conservative Supreme Court. He does not have the mandate of a landslide victory. All this will curb whatever radical instincts he has — or radical measures are thrust upon him. The Left is already steeling itself for disappointment.

Biden’s genuine desire to heal America is not being helped by the Democrats’ desire to impeach Trump, even though the process can only be completed after he ceases to be president. No former president has ever been impeached. Procedures against even Richard Nixon were halted when he resigned in 1974.

Nor is unity helped by constant calls on the Democratic Left for anyone ever in Trump’s employ or even remotely connected with him to be placed on a blacklist to be barred from future employment in the public or private sectors.

It is the Left’s own version of McCarthyism — just what Senator Joseph McCarthy tried to do with anyone he deemed a communist in the 1950s. I can’t think of a better way of stoking the worst fears of the Trump base. But the Republicans are a far bigger menace when it comes to perpetuating division. It is remarkable that 147 Republicans in the Senate and House voted to overturn the presidential election result even after the Trumpian mob had rampaged through the citadel of U.S. democracy.

Prominent Republican politicians, such as Senators Ted Cruz (Texas) and Josh Hawley (Missouri), are pushing Trump’s claims of a fraudulent election, even though they know them to be false, either because they’re scared of the Trump base or because they want to inherit it.

Even if Trump fades into a morass of litigation and debt-ridden finances, his dark shadow looks like haunting the Republican Party for years to come. More than 73 million Americans voted for him. Most believe his concocted claims of a stolen election. A substantial minority think the mob was right to rampage through Congress — this from the self-styled party of law and order!

Trump may be a loser: he lost the House in 2018; he lost the 2020 popular vote by seven million; he lost the Electoral College, which formally picks the President, in December; he lost the Senate this month with his cack-handed interventions in the Georgia run-offs; and he lost in more than 50 courtrooms across the land when his lawyers failed even once to establish there had been widespread fraud. But he is their loser.

As long as this mood prevails in the Republican Party, there can be no return to sanity or sense in the party of Abraham Lincoln.

America is at its most unified when its two main parties occupy the centre, centre-Left and centre-Right ground, as in the Eisenhower and Clinton years. The Democrats are still clinging to the centre-Left. But there is no sign the Republicans will fulfil their part of the bargain any time soon.

So what can be done? The best I can suggest is a period of strong post-pandemic economic growth. The conditions are certainly in place for it.

Moving day for a departing Donald

Donald Trump’s advisers have been pictured removing a collection of mementos from the White House before he leaves office.

One man was seen carrying away a framed certificate, while another with a trolley lugged several boxes containing dozens of newspapers from Trump’s time as President. Others contained clothes.

His daughter Ivanka was spotted outside the West Wing. Moving trucks were seen at her £4.8 million Washington DC townhouse as she and her husband, Jared Kushner, relocate to Florida. 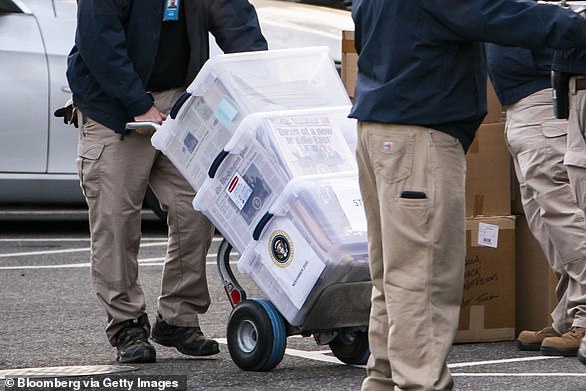 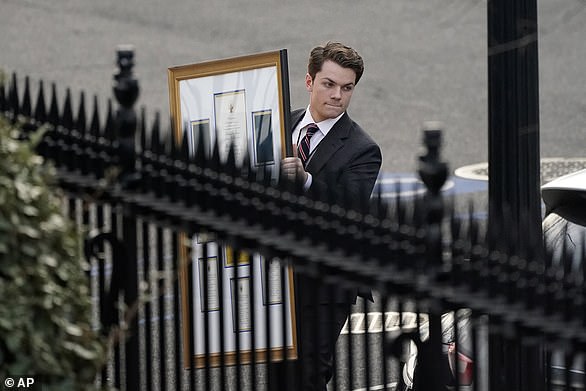 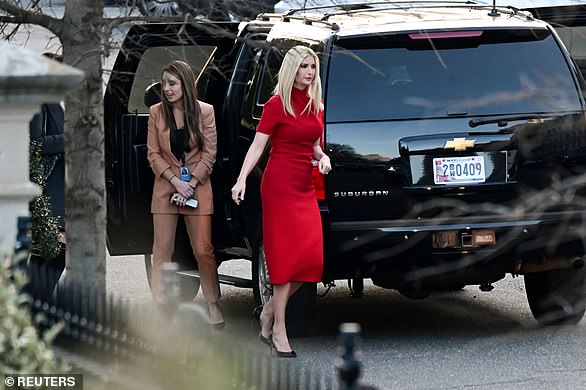 His daughter Ivanka (pictured) was spotted outside the West Wing. Moving trucks were seen at her £4.8 million Washington DC townhouse as she and her husband, Jared Kushner, relocate to Florida