For decades, we’ve been making excuses for China. Often they’re pre-emptive – we excuse Beijing’s bad behaviour even before it’s actually done something. Does this make us enablers or just apologists?

A long-standing excuse was that China was going to need more “strategic space” as it grew richer and more powerful. This was an argument whose most prominent advocates in Australia were Paul Keating and Hugh White. 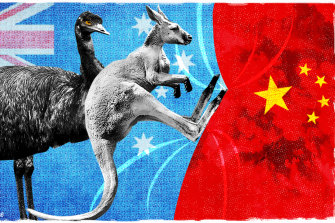 The concept seemed to make sense. They argued that a rising China would want more power and should be allowed it. To accommodate this, the US needed to back off in the Pacific and create more “strategic space” in which China’s armed forces could operate more freely.

The historical and moral rationale was that the US itself had demanded more “strategic space” as it grew powerful. President James Monroe had declared the Americas to be a US sphere of influence, off limits to the great powers of Europe, in 1823, for instance, with the Monroe Doctrine.

Funny thing, though. While this argument was often raised in favour of China, it was not raised in favour of another rising great power in the region – India. It’s true that India’s rise is in a much earlier phase than China’s, yet rising it is. No one’s been told to back off to allow India more “strategic space”.

China eventually decided to start grabbing “strategic space” for itself. It took maritime territories also claimed by its neighbours – the Philippines, Vietnam, Malaysia and Brunei.

Fair enough, right? A rising China is entitled to more “strategic space”? When the Philippines brought a case against China to the international tribunal at The Hague, the independent experts disagreed. The independent arbiters ruled in 2016 that Beijing had “no basis in law” to its claim under the UN Convention on the Law of the Sea, to which China is a signatory.

Beijing’s response? It turned the maritime features it had seized – reefs and rocks – into islands and built military fortifications on them. We now see that that was just the beginning.

Under Xi Jinping, China is using its armed forces increasingly to intimidate Japan, India and Indonesia among others, while breaking its solemn commitment to Hong Kong’s autonomy and increasing its military pressure on Taiwan.

The argument to allow it more “strategic space” was a pre-emptive excuse not for some elegant academic argument on the rise and fall of great powers but an invitation to a rogue power to smash its way to dominance. 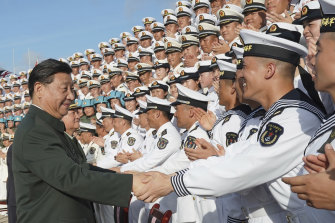 Under Xi Jinping, China is using its armed forces increasingly to intimidate Japan, India and Indonesia among others.Credit:AP

And it’s not about the moral equivalence of China with the rise of the US a century or two ago. It’s about the absolutes of security today. Beijing is injuring its neighbours, destabilising the region, and ignoring the rules that middle powers like Australia rely on for national security and sovereign survival.

Excuse number two. We mustn’t “make China angry”. Over the past few decades, the Australian media has been conditioned to expect “anger” from the Chinese government. We put ourselves in a constant state of anticipation. Reporters and editors closely watched Australia’s government for anything that might “make China angry”. It became the main frame through which Australia absorbed news about the bilateral relationship.

Altogether, Australian newspaper reports on relations between Australia and China have featured the word “angry” on 1057 occasions over the five years from 2015 to 2020, according to a search of the Factiva database. That’s an average of 211 per year. Or one report of China’s “anger” at Australia every 1.7 days. These reports usually are interpretations of remarks in the Chinese Communist Party’s media or by Chinese officials.

This is unique among Australia’s international relationships. No other country’s dealings with Australia are assessed consistently through the prism of anger, anticipated or actual. Australians are not told that they should live in fear of any other nation.

So, naturally, when China takes action against Australia it seems justified by its anger. Inevitable, almost. Implicit is that Australia has acted wrongly, aggressively or provocatively. It has earned this anger; we are somehow responsible. 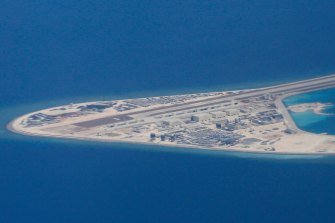 An airstrip, structures and buildings on China’s man-made Subi Reef in the Spratly chain of islands in the South China Sea.Credit:Bullit Marquez/AP

Is China actually angry in all these instances? No one seems to bother asking the question. The Australian sinologist Geremie Barme gives us a strong clue: “Performative outrage is a high art in China.” So is propaganda and what the Party likes to call “discourse control”.

This successful Chinese conditioning of the Australian mind over the decades had made us more receptive to the sort of self-abasement we are urged to perform to assuage China’s “anger”. This week, for instance, we hear a former secretary of the Department of Foreign Affairs and Trade, Philip Flood, telling us that the “current low point” in relations is caused by both countries and that Australia needs to approach China with “more nuance”.

What sort of nuance would Flood suggest we use against a fascist power that is crushing human liberty at home – including a program of genocide in Xinjiang – and using brute force to make illegal territorial grabs abroad?

Let’s recall that the origin point of the “current low point” was the bipartisan decision of Australia’s Parliament to pass laws against foreign interference and espionage. This was followed by the ban on Huawei. And the request for an inquiry into the origin of the pandemic that has killed 2 million people so far and created a global recession.

The truth is that Xi’s regime is not entitled to the “strategic space” it is seizing from its neighbours. It is not righteously angry at any Australian lack of nuance. It is a dictatorship determined to break Australia’s sovereign will. Australia is seeking to defend itself and its interests; Beijing is the aggressor.

It is, as Kevin Rudd has said, “the enemy of liberal democracy”. It is also the enemy of the sovereign independence of its neighbours and of stability in the Indo-Pacific. And, as it inflicts some $50 billion worth of economic coercion against Australia under the pretence of trade technicalities, it is also the enemy of rules-based order.

There is no equivalence. So far Australia is holding firm against Xi’s campaign of coercion. It’s possible, however, that Xi could end up breaking Australia; we might end up yielding our independence to a rising fascist power. The least we can do is to stop making excuses for our oppressor in the meantime.

The American poet Robert Frost once said that “a liberal is a man too broad-minded to take his own side in a quarrel”. We have to decide whose side we are on.