Are you a fully vaccinated person? Half your luck. By last count, only one in 10 of us can claim that status, the two-jab citizen who needs a neater label. Australia doesn’t do long names well. “Fully vaccinated person,” needs a haircut, if only to hasten the dialogue. 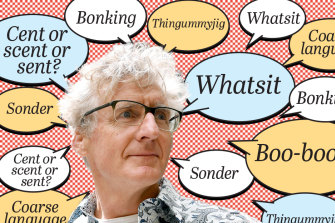 A Twitter callout lead to an online deluge. My grievance was universal.Credit:Jo Gay

Explaining my Twitter plea, a cry to trim the clunkiness. Who can craft a snappy synonym for the same individual? Not for euphony’s sake, that lyrical art of sweetening a language’s sound, but out of necessity.

Think about it. By the time we give air to eight syllables, or even commit those 21 letters to paper, a certain virus can sneak a suburb. Hop a train. Gatecrash a school. Prune the name and you spare vital seconds. Better still, you forge a neater badge, a catchy ID customised for billboards and doorstops. Be a doubler! A vaxonaut! A two-shot wonder!

That’s just a glimpse of the online deluge. My grievance was universal. For such a key figure in the COVID-19 counterpunch, the fully vaccinated person owns a wearisome epithet. Three cumbersome words for a twice-needled citizen was one big pain in the neck.

The fully vaccinated person owns a wearisome epithet. Three cumbersome words for a twice-needled citizen was one big pain in the neck.

Alternatives avalanched all day, from A (armed) to Z (Zenacat), from jabizen to recidivac. Historian David Hunt, author of Girt and True Girt (both with Black Inc), went for the visual gag of W, a marriage of two Vs as much as a hieroglyph depicting a pair of needles. 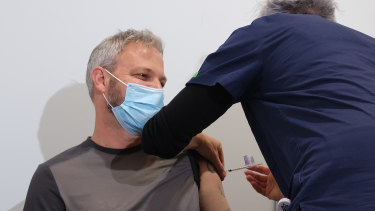 Duality in fact was a strong theme among responses, a bid to defog the data, where murkier press releases will actively conflate the fully vaccinated person with the partly vaccinated one, as if orphan socks in your drawer are as useful as complete pairs.

Hence the twofold flavour of twixer and boxer (an owner of two jabs). Or bi-Pfi and bi-Az, doppeljabber and bivaxual, twinshot or antibody-double. Nicholas J Johnson, a professional magician, conjured the marvel of doppio, in honour of the double shot. Though my darling in this category came from Lye Lin Ho, who offered binoculated.

Hurling water on this batch, however, was Nick Riker, a further brainstormer, who warned against borrowing on injection scoresheets. “Soon we’ll have a third or fourth shot (to maintain immunity). So anything that has to do with numbers will become obsolete.”

Or perhaps one shot will do the trick, as the Moderna recipe promises. No great surprise to anagram hounds though, since “the Moderna vaccine”, as recently observed on the brilliant www.anagrammy.com, is a blend of “heroic advancement”.

As night follows day, my call to action drew as many cynics as neologists. Quiz some citizens and they’ll insist a fully vaccinated person should be dubbed a PM or a Coalition polly, a boomer or a private schoolboy.

Deft adjectives also lobbed, from privileged to sensible, from safe to miraculous, from informed to vaxceptional. And the collective noun? Try a smugness.

Playwright Ross Mueller lodged a vote for race winner. Ian Gay encapsulated both rarity and onomatopoeia in his push for yowie, up there with Peter Hill’s jabaroo. While another quipster worked blue, suggesting the label the discourse lacks is a complete prick.

Still, after so much jibber-jabber, we remain awash in options. Pick a favourite, I suggest – then use it or lose it. Because if we can’t fast-track this vaccine strollout, at least we can shed half its syllables.

THE WATCHLIST
Find out the next TV, streaming series and movies to add to your must-sees. Get The Watchlist delivered every Thursday.