Australian acts have dominated Triple J’s annual Hottest 100 list, with Peking Duk, Tash Sultana, G Flip, Amy Shark and Tame Impala all making an appearance in the second half of the countdown.

Local acts made up 66 per cent of this year’s list, tying with 2016 for the most Australian entries on record. It was a fitting musical send-off to 2020 given many Australian acts couldn’t tour the festival circuit or even play at their local pub for months on end.

Up-and-coming Australian rapper The Kid Laroi summed the mood up best when he found out he had two songs featured in the countdown. 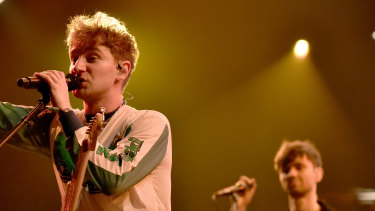 “How am I going to be celebrating?” he wondered. “By making more music.“

But Saturday’s countdown wasn’t all well-known names: a quarter of this year’s artists had never been included in the top 100 before.

All ears were tuned to on Saturday night to see if British psychedelic pop group Glass Animals would take out the top spot.

Thousands flocked to parks as the mercury nudged 30 degrees in Sydney, Brisbane and Melbourne. The sunny weather was a blessing for Hottest 100 revellers, given restrictions remained in place for indoor gatherings across much of the eastern seaboard.

As the annual countdown edged into the top 20, Glass Animals remained the favourites to nab to the No. 1 spot. The British band had received the most support on social media in the lead-up to the Hottest 100, according to prediction website 100 Warm Tunas.

Their hit single, Heat Waves, is a pared-back pop song that has received mixed reviews from some critics. That hasn’t stopped others from praising the song’s simplicity and claiming it is as an anthem for young people during lockdown.

Just scraping it onto the list this year, at position 100, was New Zealand pop artist Benee. Her single, Kool, from her debut album, went viral online thanks to a music video inspired by The Sims video game.

True to Triple J’s reputation as a cooler, younger cousin to ABC local radio, 61 F-bombs featured during the eight-hour broadcast. Hosts even speculated about some songs making it higher on the list thanks to going viral on social media platform TikTok.

Last year’s Hottest 100 winner was American pop sensation Billie Eilish with her hit single Bad Guy. She was the first solo female artist ever to top the Hottest 100 and also the youngest. The year before, Ocean Alley claimed the top spot thanks to their funky, slow groove single Confidence. In 2018, the top spot went to American rapper Kendrick Lamar for his hit Humble.

Triple J will be reliving the Hottest 100 on Sunday with the Hottest 200, which will include the songs that just missed out on being featured on Saturday.